Does Joe Crowley really believe his own bullshit? (part 3) 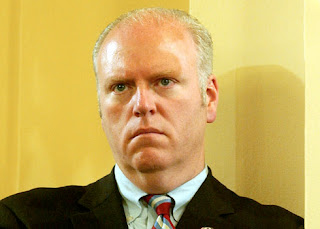 Faced with a surprisingly strong challenge from progressive first-time candidate Alexandria Ocasio-Cortez in New York’s Democratic primary, Crowley, the fourth-ranking House Democrat, is slated to appear at the the offices of BGR Group on 13th Street in Washington, D.C., on Wednesday afternoon for a fundraising reception, according to a copy of an invitation obtained by The Intercept.

The fundraiser is at an odd venue for a Democrat who claims to be an avowed opponent of the GOP.

The invitation lists Crowley’s position in leadership of the Democratic Party and as a member of the powerful Ways & Means Committee, which oversees tax policy. The fundraiser, which asks for $500 minimum to attend as an individual and $1,000 to attend for political action committees, is at an odd venue for a Democrat who claims to be an avowed opponent of the GOP.

BGR is named for its founding partners, all of whom are Republican: Haley Barbour, the former Republican National Committee chair; Ed Rogers, a former aide to President Ronald Reagan; and Lanny Griffith, a former education official in President George H.W. Bush’s administration.

What fantastic "progressive" values! Champion of the Democratic Party! Our next House Speaker! Hip, hip, hooray!
Posted by Queens Crapper at 6:22 AM

His corrupt and evil father and grandfather taught him well. Break the cycle. Vote him out!

Proof that bipartisanship in DC is a danger.

Crowley is a heinous bastard and inveterate sellout. No one is more deserving of utter humiliation and destruction, the same he is meting via his fraudulent pose and pathetic pandering as a progressive and his cozy political career as an elected official.

This money whoring both proves that he will not do a damn thing stopping Trump's insane and expensive policies, which he hasn't done already, but is just like him with his duplicitous behavior, brazen lying and of course being a silver spooned fed manchild whose career is derived from good fortune nepotism.

When he loses next Tuesday, and I think he will, expect the feds to crack down on him and his Queens Machine and watching him being frogmarched from his Virginia mansion in handcuffs. Topping it off with the inevitable happy face mugshot (remember John Edwards?)

Crowley, Manton and Vallone were in bed with Damoto and Trump always.

You get who you vote for.
Ignorant Queens voters get shady politicians. That you can always depend on . Joe Crowley does.

The 'Fresh off the Boat' will elect him in a landslide.

Compared to where they are from, he is George Washington.

The Crowleys of our nation thrive in American sub-cultures alien to 'the American Standard.'

Been that way since Aaron Burr and Fernando Wood and Boss Tweed and Richard Daley.

The wars of Olde FLuschinge: Larouche vs BOland

Ocasio-Cortez will be a first term rep. with no standing or seniority to sit on let alone lead any of the congressional committees like Crowley does, nor the power to carry out any of her more crackpot ideas. Crowley keeps power in Queens because he can leverage many other more junior national representatives in an exchange of favors. "Ideology" is totally secondary. It will be far easier to get rid of her in the next round if she turns out bad. Why is this so hard for you people to understand? VOTE AGAINST THE MACHINE!

Crowley turned his back on his own, Irish- Americans, and now one of his dangerous pets is biting his hand.

Interesting he's doing this fundraising on Wednesday when the primary is on Tuesday. Is he that confident of victory? Or is he raising cash for his next job?

A first term rep with no trust, standing or seniority is exactly what is needed.

A first term rep hasn't established the trust, connections & buddy system to fuck us with. --And THAT is exactly how you democrats when you have no other winnable choices. A democrat who CANT DO NOTHING, looks good on camera is perfect and the best kind !!
I don't care who it is, ANYBODY but Crowley !

A good jamming and bust up of the gear box is what is desperately needed right now--fix things next time. I think she will win, all the stupid voters, young fellow Latino voters say she pretty and that what they vote on.
Crowley needs to pack his bags like his sister (or was it cousin or niece)so dam confusing with these huge Irish family's)

If YOUR idea of honest, ethical leadership (that leads by example), is a shithead and tired vulture like Serf Maltese, last Anonymous - then, it is YOU who is the problem here, and not Maltese, a hyper-corrupt, entrenched and establishment-rigged Republican ass licker (just like the rest), who devalues honesty itself. What is with Queens residents? I guess that they enjoy their corporate wage slaves jobs (with no mercy), and their plebeian existence until the graveyard comes a knockin'.

❝It's easier to fool a person than to tell them that they've been fooled.❞ —Mark Twain

❝You can fool all of the people some of the time, but if you do it just once, it lasts four years.❞ —Alfred E. Neuman

❝If voting was any good, then they wouldn't let us do it.❞ —Mark Twain

❝This planet is obviously being used as an insane asylum by other planets.❞ ―George Bernard Shaw

❝The further that a society drifts from the truth, the more contempt will be held against anyone who speaks it.❞ —George Orwell