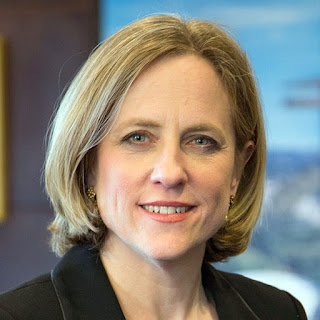 Multiple sources have told the Chronicle that Borough President Melinda Katz would be interested in running for District Attorney should DA Richard Brown opt not to seek re-election in 2019; or in an appointment to the post should he choose to retire.

Katz would not dignify the question when asked Wednesday by the Chronicle. “Judge Brown is a great DA, and there’s no indication he intends to retire,” she said.

A source with knowledge of Queens politics partially confirmed both other sources’ accounts and that of the borough president, saying Katz, an attorney, would be interested in the top prosecutor’s office under either scenario.

“But there’s no vacancy; and Brown’s not going anywhere,” the source said.

Brown himself was first appointed to the post in 1991 by then-Gov. Mario Cuomo — district attorney is a state position — and has been repeatedly re-elected with few serious challengers. But he does have health issues.

Katz, who is term-limited out of the Borough President’s Office after 2021, has said in the past that she wants to have a leadership role on matters of importance to the city when her term ends.
Posted by Queens Crapper at 5:57 AM

Give it to her. Brown has Parkinsons and onset dementia. He should not be working as DA!!!! He can hardly speak anymore.


Katz should run for Comptroller.

She is better suited for the job.

Attention to fiscal detail is one of her strengths.

She also has a good understanding of citywide issues and agency protocols.

She is not a litigator.

Running for citywide office is hard, but she would be the right person for that job.

Why are local electeds afraid to run against Brown? He's been in office for a quarter century. Unless he had illusions of grandeur, he should politely retire.

The job would be a better fit for Rory Lancman, who is more outspoken and experienced in legislation on matters relating to criminal justice.

I believe that he does not live in Queens.

Katz has done as good as a job as someone can do in a near-powerless position like Boro President, but I like Rory Lancman as the next DA - criminal and judicial reform has always been one of his focuses.

I agree with the above poster; Katz is well suited for the Comptroller job and I hope she runs for that instead.

Great, another Queens County hack running the DA's office. Katz has no experience as a prosecutor, and is corrupt as hell...Crowley's poodle. When will people of Queens County wake up! We need someone with no ties to the corrupt county dem organization.

And, don't EVEN get me started on the $40 million in wasted, irresponsible tax dollars to refurbish the intentionally neglected structures of the Pavilion at Flushing Meadows Park that got sudden attention - ironically while completely ignoring a statue in Katz's OWN backyard at Kew Gardens Plaza that was easier to remove and deny its very existence, instead of common sense spending that could have conserved and preserved this breathtaking, most welcome-and-wanted public art work for which no one's voice in the community was recognized, much less a due process that was ever executed and heard.

No one will ever admit it on this thread, but that's why half of the city's registered voters have continually abstained from voting altogether, when the system is THIS rigged and destructively (and irreversibly) exclusionary beyond reason - and, now SANITY itself.

And, the public be damned (again and STILL)! What? WHAT? THIS IS NEW?? THIS IS PROGRESS and DEMOCRACY???

Melinda is a concert promoter more than boro president. The top ladies in public offices are in way over their heads and have massive delusions of grandeur, and that includes Letitia James who is trying for A.G. and of course Chirlie de Faustio who thinks she is already mayor and is certain to go for that position for real when her husbands time is up.

Hand me down hack! At least she won't need old phone books to increase her height like midget Brown used to reach his desk.

No one from Queens ever gets a city-wide job. The politics of the other boroughs are different by a mile than Queens. No one wants anything to do with anyone from Queens.

Good point. If people knew how government was in the other four boroughs they would be shocked. We live in an inbred isolated backwater compared to even the Bronx.

Katz. Hevesi. Koslowitz. Stavitsky. They have all overstayed their welcome. Time to vote them out. Break up the family clubhouse.

Please do not insult the "inbred isolated backwaters" by comparing queens the them. they deserve better than that comparison.

>Look to James Oddo to see what a real borough president is like.

What is he like? What does he do right?