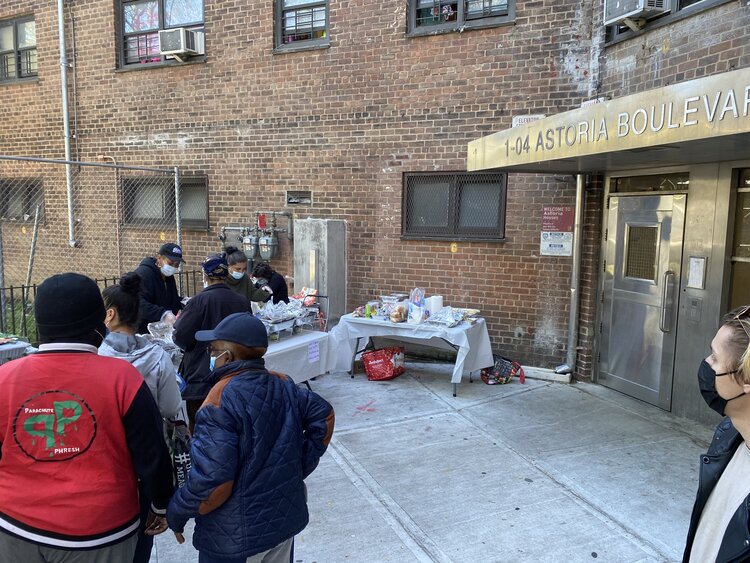 For 25 days, residents of one building in Astoria Houses have been unable to cook a hot meal.

Their building has a gas outage, and residents of the 48 affected apartments say they have received very little information from the New York City Housing Authority, despite their appeals for a repair timeline.

Instead, they’ve received one electric hot plate per household.

“The only thing you can cook on that hot plate is coffee and water,” said Rebecca Ford, an 87-year-old who has lived in Astoria Houses with her grandson for five years.

Over the past three weeks, Ford has had to dip into her rent money to purchase meals she would have normally cooked at home.

The 400,000 New Yorkers who live in public housing are no stranger to extended gas outages. This past year, there have been outages at NYCHA’s 303 Vernon, Marlboro Houses and Red Hook Houses in Brooklyn. In the case of the Marlboro outage, which began nearly a year ago, residents’ stoves were unusable for weeks and still cold on Thanksgiving night.

Residents of the Astoria Houses fear this outage will last into this year’s holiday season.

“It’s terrible because the holidays are coming up. I go to my daughter’s for Thanksgiving; but for Christmas, I usually have my family here and I don’t think my stove will be working by then. Do you know how long it took them to fix my bathroom? Over a year,” Ford said.

Ford said the broken stove is the most recent addition to a long list of issues with her apartment. She said she has frequently reminded management about peeling paint, holes in the interior and exterior walls, unsanitary hallways and broken elevators.

“Our city was willing to build a deck over Sunnyside Yards for billions of dollars. Why is the money always found for things like that and not for people who deserve a decent place to live?” said Evie Hantzopoulos, a Queens Community Board 1 member and a candidate for City Council.

NYCHA is a massive drain on NYC’s tax base.

Aren't there elected officials in that district? This has been going on for WEEKS!!

Why don't they go without pay until these people get heat as a sign of solidarity? eh?

If Trump was responsible everyone would be going nuts. But when THEY drop the ball, like with Biden, its always crickets with the Dems.

Nycha has to be the most horribly maintained and negative quality of life for free yet regulated shit you can get.

BLM? Not to DeBlasio and his commie cohorts.

Isn't that Van Bramers district? How come he hasn't jumped all over this shit?

Ok, they don't give a crap (queens crap that is) about the people who live there.
Isn't obvious?

Where is the BLM movement and the outrage about this problem? I guess there is no way to make a buck of this problem. Oh I forgot this isn't about criminal interactions with the police. Most of these people are black and brown. Where are they now to help these people that live in these squalid conditions. There are a lot of decent people that live in theses (projects) housing developments that need help.

There is no way to make a buck of this so you won't hear a word from the politicians or BLM. Both publicity whores.

Its Astoria - unless it involves the Greeks or Italians particularly food who GAF?