Something both disturbing and hilariously stupid went down last night, which means it belongs on this blog.

So, Bayside BLM put out a call to its brainwashed to gather in Bushwick to protest "police unions and Q anon". Right off the bat you know this is going to head in the wrong direction. And it literally did! 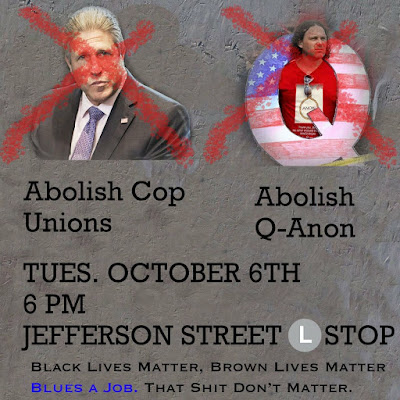 The fearless black clad chanters marched their outraged tuchuses to Maspeth, to protest outside the home of Ed Mullins, the President of the NYC Sergeants' Benevolent Association:


There's only one problem: THAT Ed Mullins doesn't live there. Someone with the same name does. That didn't stop Lucha Libre! You may remember this bigoted bloated bloviating bloke from Bayside BLM's Pat Lynch protest.

#Protesters stop marching and call out the #NYPD for their continued #racism and #policebrutality pic.twitter.com/LrszR3aXow


BLM then continued their march, and when they came to a patriotic block where homeowners were proudly displaying Old Glory, they stole the flags.

#Maspeth residents clash with #protesters as they catch them stealing #Americanflags off their porches #Queens pic.twitter.com/QcYGz5Uk9X


And then set them on fire.


They then proceeded to the town square, where a 9/11 memorial stands, to carry on with the hissy fit. (FYI: Holden's family doesn't look very white. The Sunnyside protest was organized by the 108th Pct Community Council. Holden demanded that the Glendale shelter be closed. There currently isn't one in Maspeth. But why let facts get in the way when you've come this far on a Wrong Way Corrigan mission?)

#Protesters chant “F*ck Bob Holden” because Council Member @BobHoldenNYC voted against the #citybudget to take money away from the police, his continued support of ICE, and his #BackTheBlue support pic.twitter.com/vTEQRjtp48


Holden's opponent, meanwhile, was cheering them on from the sidelines. He and his wife Angela a former NYPD detective, have twin sons and reside in Nassau County...He is a member of the Board of Directors for Building Bridges of Long Island, Mercy College School of Business and the National Football League Players Alumni Association where he serves as Treasurer; he has served as a volunteer firefighter in Nassau County, head coach of the men’s ice hockey team at New York University and is a member of the American College Hockey Coaches Association, the Amateur Hockey Coaches Association, USA Hockey and the National Association of Fitness Professionals. In addition to coaching at the collegiate level he continues to dedicate countless hours to youth hockey in the Long Island Amateur Hockey League in New York.

So, they were not just at the wrong house or in the wrong neighborhood. They weren't even in the right county! I guess the fact that the long time president of a police union is not likely to live in a mixed use industrial-residential section of Queens didn't dawn on these geniuses. They also didn't even have the correct union boss on their flyer...
Posted by Queens Crapper at 8:08 AM

Also, Holden's opponent's celebrating this nonsense reveals that he would prefer to win the district by some kind of proxy coup instead of reaching out to residents for their votes.

From The Honeymooners episode, The Bensonhurst Bomber: "Hey getta load of fatso over there!"

These fucking idiots couldn't find a whore in a whore house with a fist full of fifty dollar bills. FUCKING IDIOTS

"Getta load of fatso over there."

So Any word from the Queens DA? Is this good for Queens families?

Who are we kidding? Is anything this group of riot chic buffoons did even criminal in this town anymore?

You, New Yorker's have supported this kind of fascist hate-think for generations, always voting in the most anti-American elected officials that ran for office. The chickens are now coming "home" to roost.

BLM has the collective IQ of a lima bean.

These people really need to get lives anymore. How about they start by making their own neighbors a better place to live by helping to stop the violence in their own communities and start helping clean up their areas especially Jamaica. Stop being such lowlives and look in the mirror. And less than half of nyc anymore is white. So technically whites are now the minority in nyc. So just leave people alone here and go about your own ways. Plus, most of the cop force in nyc is made up of "minorities" so just cut your bullshit! I'll be damned if someone comes in front of my house and does any of this shit. My family has lived in nyc for over 150 years. So I'll be dammed if any of these low lives come in front of my house and start any of their bullshit.

Melinda where are you? You are condoning this type of activity?

These people need to be rounded up and dealt with.

Paid for by George Soros.

BCLM started out being quite stupid but somehow they get more so with each passing day.

The bullhorn bullshitters. They've got a permit for this amplifier? If not, NYPD kindly confiscate. Thank you.

Call out the guard. Fire some volleys!
ENOUGH pussyfooting around!
Do the crime and serve some time!🇺🇸

"The bullhorn bullshitters. They've got a permit for this amplifier? If not, NYPD kindly confiscate. Thank you."

Why do they think it’s alright to steal peoples flags and then burn them? Horrible
These people are a nightmare

Evil bastards... they wouldn’t last a day in a communist country that they want us to be so bad.... “where’s my Netflix and iphone?” they’d be killed if they burned a flag like that... grow up

Very true. First they beat them with the help of a slapping robot. Then put them in waist deep ice cold water. Preferably in December. George Soros could pay them a million bucks/hr they wouldn't take it.

Melinda(sperm bucket for Curtis Sliwa) Katz is busy looking for cops putting their hands on someone to prosecute. She doesn't want the police to their jobs. You get what you vote for folks. Elections have consequences.

And welcome to 5th generation warfare. A war of demoralization through tech tyranny and oligarch sponsored street mobs.

The fact that something like "Bayside BLM" is actually a thing really boggles my mind. Bayside looks like what Jamaica used to look like. People live in Bayside (voluntarily) because low-iq, high testosterone mutants haven't destroyed it yet.

If Bayside BLM wishes to really aide in the great struggle I suggest they move to the source - Jamaica, Queens bridge, Lauralton. Or maybe go "all out" and visit Liberia or Rwanda.

My assumption is that Bayside BLM are not black people at all but emotional St. Francis Prep sophomore females who play with black sticks every weekend (as every single commercial, netflix and hulu program implores them to do).

If I'm wrong, and they are actual black people from that 4 square block neighborhood behind the old Keil Brothers then it should be pointed out that they have the highest standard of living of ANY sub-saharan black people at ANY time in world history.

They are just peaceful protesters getting their just "reparations" from those mean unjust businesses.

Who's breeds these thugs ?

Bayside Parents let their "Kids" run free and support BLM because they fear being called 'racist'!

Al Sharptons Wins ! Riots, looting and shoplifting is a pre-reparations act of solidarity with the #blm movement.

Anyone who didn't see this coming a decade or so ago wasn't paying attention.

BLM is Marxist and “Antifa is just an idea.” -Antifa member

Bayside BLM is organized by an angry dope. They even took down the affiliation with the event from their Instagram. “We’re back” LOL. FYI, Jessica and her friends fucked around and found out soon after in Manhattan and ended up getting arrested.

Like I always say don't like this country move on out.I will help u pack your bags.peaceful protesters my ass.just trouble makers.they don't even care what they are protesting about.we need a police state for Christ sakes.

If I ever seen a RACIST comment is this. White, pampered "liberal", "progressive" kids rioting, killing, looting in the name of black (resent the color labeling - they are Americans!) folks!

So Biden, the head of the Biden crime family is creating race war to win. At all cost.
With the MSM's help. Hey they benefit also - no regulations, little pedo affairs go away.
Add the Bush and Clinton crime families and we look really messed up as a country.

Obama was blackmailed. No hard feelings for the man, he was a victim also.

Now what's up with the generals who made a lot of money on senseless wars?


Bruce Lee said once focus on the big things, not the small distractions.

Have absolutely nothing against the Asians or any other race. What I do resent is the using of the races as weapons. Same thing happened here. Donald Manes and Queens DemocRAT machine may you all rot in Hell!