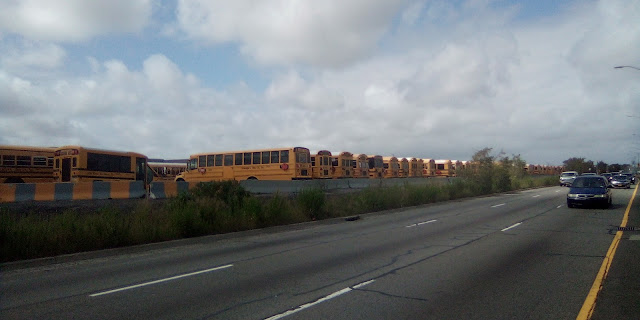 No kids? No problem!

The Department of Education is bailing out a school bus company owned by a major donor in one of Mayor Bill de Blasio’s biggest campaign finance scandals, agreeing to take over the firm for an undisclosed price.

Under the deal announced by City Hall on Tuesday, the DOE will take ownership of Reliant Transportation’s fleet of 1,000 school buses, other vehicles and related functions.

“This move raises all sorts of questions, including, how can the city afford it in the face of huge budget shortfalls?” said Leonie Haimson, a longtime parent advocate who heads the nonprofit Class Size Matters. “Why are they adding more city employees while threatening to lay off thousands of others?”

“And,” she added, “why move to acquire this company now, when we have no idea how long school buildings will remain open and whether any busing will actually be needed?”

Reliant’s current employees will all be offered new positions after the takeover at the city-established nonprofit formed to operate Reliant’s former business.

The nonprofit — New York City School Bus Umbrella Services, Inc. — will also be responsible for Reliant’s pension obligations, which a source in August pegged at $150 million.

Officials described the deal as “tentative” and refused to provide additional details as they spun the purchase as “a long-term investment in school bus transportation that will provide greater stability, flexibility, and oversight in school bus service in the years ahead.”

“We are doing everything we can to guarantee safe, fast, and reliable bus service for the students who need it most,” de Blasio claimed in a statement. “This agreement delivers on that promise and makes a lasting investment in our school communities for years to come.”

Reliant’s parent company is partially owned by Alex Lodde, a key donor to de Blasio’s failed 2014 effort to bankroll a Democratic majority in the state Senate, who was its longtime chief executive and remains on the firm’s board of directors.

Lodde gave $100,000 to an upstate Democratic county party in de Blasio’s effort to skirt campaign finance laws, which resulted in a probe and scalding report from state regulators.

The city Department of Education has signed a new deal with the city’s biggest school bus operator Reliant Transportation to acquire its 1,000-vehicle fleet and all related equipment in a contract city officials hailed as a “long-term investment.”

The amount of the contract was not revealed by the DOE, which said it’s a “tentative agreement.” It’s expected to be finalized in the first half of 2021.

The Daily News reported last year that Reliant Transportation had a $120 million annual contract in the last fiscal year, though the company has been beset by complaints of delays and bus breakdowns.

Put someone criminally insane in power and get criminality. Who could have expected that?

No worries. He is next. Rudy got them all :)

No wonder crooks like him and Hillary want a race war!
The rest of the delusional progressives (communists) are next.

Dalton from the UES said...

Eventually the city will be running its own school buses. That's how NYCDOT gradually took over the private bus lines like Green Bus. First they owned all of the buses, then they took control over the scheduling of the buses and then built new city owned facilities for other companies, then the MTA took over.

Who could have expected that?

The "commies", "socialists" who actually voted for him.

Gov. Coumo is not any better.

The Nazis did this, disarmed the Jewish population so they can kill millions.

Despicable and disgusting. Biden wants him AG if they win?

Hey hey, stop being so personal.
Have you noticed Kalifornia, Portland and other wonderful "Communist" run states and their happenings lately?

Does this mean that the Vallone family school bus company in Whitestone Queens will be purchased by the City, giving a windfall profit to this politically connected Vallo?