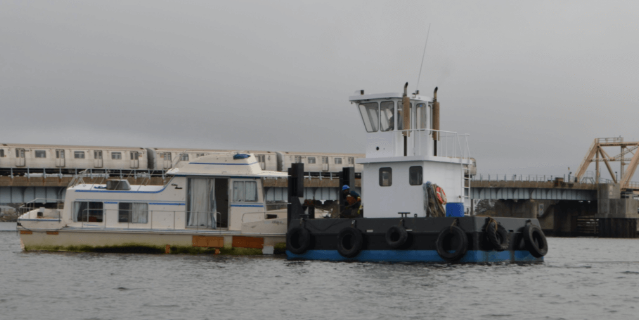 In the ongoing battle to clean up Jamaica Bay, Councilman Eric Ulrich joined members of the city’s Parks Department and the Jamaica Bay Ecowatchers for a demonstration that removed a derelict boat from its waters.

Earlier this year, Ulrich secured $55,000 in funding for a cleanup initiative that will remove abandoned vessels from the bay.

“Most people are not aware of just how widespread this problem is, especially in Jamaica Bay. Abandoned boats are one of the biggest problems in New YorkCity’s waterways,” Ulrich said. “Not only are they an eyesore, they present multiple ecological, transportation and safety hazards. I am proud to fund this cleanup initiative, which will target the most problematic areas in Jamaica Bay, a local treasure.”

Many vessels are abandoned when an owner can no longer afford to maintain them, and leave them adrift into Jamaica Bay instead of performing proper removal. Despite having removed about two dozen of these abandoned vessels from the waters and marshlands of Jamaica Bay over the past several years, the Parks Department estimates more than 100 abandoned boats remain in the city’s waterways.

Let the homeless live on them.