The city named a boulevard after Floyd Flake 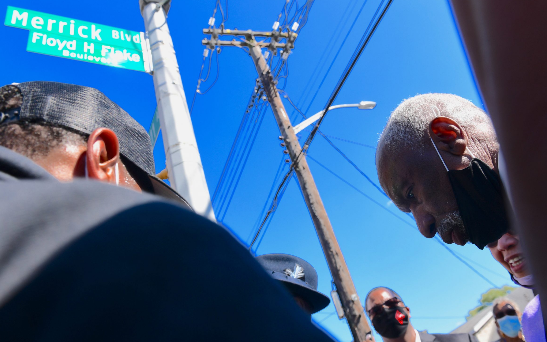 The name of Merrick Boulevard in Queens was taken from the word “Meroke” mean oyster bed. So a portion of it in St. Albans was appropriately renamed Saturday for what admirers say is the “pearl of the community,” in honor of the Rev. Dr. Floyd H. Flake. (Blech, what a write up)

Nearly a thousand residents and city elected officials jammed the streets near his beloved church, the Greater Allen African Methodist Episcopal (A.M.E.) Cathedral, on Oct. 3 for the dedication.

Elected officials and the community fully supported the renaming of the street “Floyd H. Flake Boulevard,” passed by the City Council and signed by Mayor Bill de Blasio to honor the former Congressman and civil rights activist. Saturday’s huge ceremony was full of speeches by top leaders and filled with the pomp of powerful gospel music and dancing that is the hallmark of his 23,000-member church.

A marching band led a long white limousine with his family to the open field where he was accompanied by his wife Margaret Elaine McCollins and his four children — his two sons Robert Rasheed, Harold Hasan and his two daughters Aliya and Nailah Flake-Brown — who held his arm right up to his seat.

The city is broke and taxpayer money was set aside for a ostentatious and undeserved parade for and lionization of a crooked politician. Also a ceremony of collective democrat establishment cognitive dissonance. 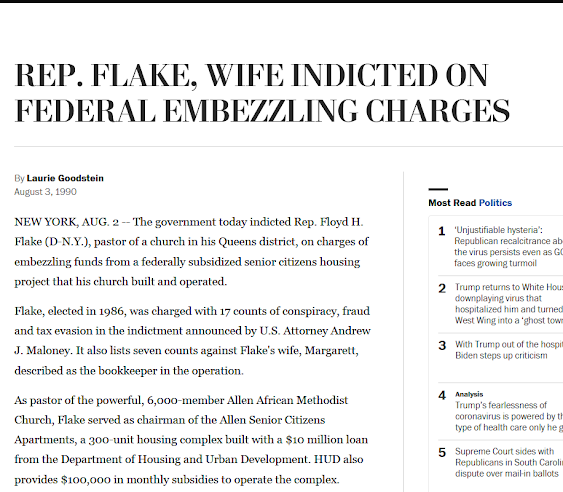 And don't forget that this city approved gathering was arranged and happened as schools and restaurants are closing in districts where covid cases rose and there's the arrogant defiant Floyd walking around with his mask under his nose and then off in close proximity with his adoring allies and fans. 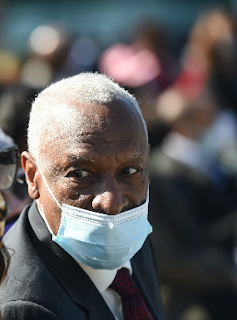 A commentator of a recent post brought up a story that makes this street renaming in the honor of Floyd more unjustified and reprehensible. Two men were involved in teenage sex trafficking, holding two girls hostage and pimping them out in a senior citizen residential building tied to the Allen Church where this dedication took place that was attended by the current mayor of New York City and New York State attorney general and the minority leader of the U.S. Senate.

Two Queens men have been arrested in separate cases in which they are accused of kidnapping teenage girls and forcing them to work as prostitutes.

According to the office of Queens District Attorney Richard Brown, Joseph Gilbert, 24, of St. Albans was indicted on an 87-count complaint charging him with holding a 15-year-old girl at a senior housing complex, which has been identified by the Daily News as the Greater Allen Cathedral Senior Residence.

Brown added that Gilbert is accused of threatening and beating the girl, and allegedly forcing her to take drugs to stay awake in order to bring in more money.

Church officials did not respond to a request for comment prior to the Chronicle’s deadline.

In a separate case, Reagan Conception, 28, of Jamaica, was arraigned on June 2 on a 76-count indictment accusing him of kidnapping and raping a 14-year-old girl and forcing her to work as a prostitute between September and November of last year.

“I want to stress that prostitution is not a victimless crime and that sex trafficking is an incessant act of brutality and degradation,” Brown said in a statement issued last Friday. “This teenage girl was finally freed but she will have to live with this horrible experience for the rest of her life.”

Our synagogues are being closed while other communities are allowed to have mass gatherings and it's celebrated by the same people criticizing us?

the arrogant defiant Floyd walking around with his mask under his nose and then off in close proximity with his adoring allies and fans.

Yes, the only thing worse would be if prior to the event Floyd had been informed that his closest aide had tested positive for COVID and then he chose to go there anyway without a mask or social distancing for an indoor event. Who would be that reckless or insane, especially for people he claims to love?

Yeah, this sounds about right for a Progtopia. Lionizing one of their criminal own is par for the course.

Waiting for the day when a dead end street will be named after Wilhelm the I-st.

georgetheatheist said...
This comment has been removed by the author.
Tuesday, October 06, 2020

Dear god what a piece of shit of an article, absolutely terrible on all counts, photography sucks especially. What do you expect from a Schneps Media outlet. Bush league all the way.... It's what is called in the trade as a puff piece.

I wish that the following was a state law. No street, bridge, tunnel, transit station, or other public structure built or maintained with tax payer money shall ever be named after a politician, living or dead.

Why do politicians deserve any extra adoration or honor? They chose to run for office, and most are greatly enriched while in office and afterwards.

If people are so keen to name things after other people, at least name them after local soldiers, police, and firefighters who lost their lives in the line of duty serving their community and country. There are plenty to choose from.

The first photo: what's the main subject? A telephone pole?

Flake wearing a Covid mask he looks like a bank robber, the perfect Halloween costume for him.

A crooked motherfucker who has Alzheimer's, god's gift to him for using his name to make money and do nothing with it to the community he has his mega shit church.

Flake. The name says it all. Next.

For the man who purposely ran for
Congress to finagle a $25m grant for his new church in Jamaica.