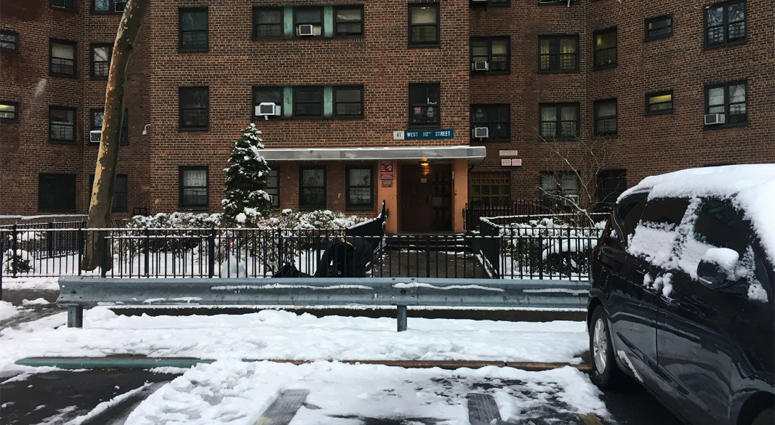 U.S. Rep. Alexandria Ocasio-Cortez (D-NY 14) has unveiled a green “New Deal” to “invest” up to $180 billion over ten (10) years in America’s public housing stock. The plan, unveiled two weeks ago, would offer public housing residents jobs in addition to funding capital repairs that have long been ignored by the Government. A central focus of the plan aims to reduce the carbon footprint of public housing, according to a report moved by the news Web site CityLab.


But there are concerns over the plan, according to public housing residents, who are advocating for a plan to fully-fund the Local public housing agency in New York City.

Although residents of public housing in New York City face immediate public health crises, like exposure to toxic mold and poisonous lead paint, high levels of lead in drinking water, and lack of adequate heat in the winter, U.S. Rep. Ocasio-Cortez’s green “New Deal” plan makes residents wait ten (10) years for full-funding, but that’s only after her plan becomes law and takes affect, something that is not assured.

In recent days, surrogates for U.S. Rep. Ocasio-Cortez have bristled whenever critics have noted that the green “New Deal” plan ignores the current the public health crises facing public housing residents. (On a recent Facebook post, U.S. Rep. Ocasio-Cortez’s supporters attacked a grassroots advocacy group for highlighting shortcomings in the green “New Deal” plan. A member of thegrassroots advocacy group is a staff member of Progress New York.) When coupled with the fact that U.S. Rep. Ocasio-Cortez’s legislative proposal ignores the stated plan by Mayor Bill de Blasio (D-New York City) to put one-third (1/3) of public housing into the hands of private landlords, there appears to be no urgency to the green “New Deal” plan. The Mayor’s intention is to demolish public housing apartments in order to rezone empty lots for 70-30 luxury rental buildings and to sell air rights owned by the Local public housing agency, the New York City Housing Authority, or NYCHA. Media reports have raised concerns about increased rent hikes, rescreenings, and higher eviction rates from the centerpiece to the Mayor’s plan, known as the Rental Assistance Demonstration, or RAD.

But the conditional nature of, and the years of waiting required by, U.S. Rep. Ocasio-Cortez’s green “New Deal” plan mean that the dangers public housing residents face as a result of public health crises and Mayor de Blasio’ on plans for NYCHA will not be countered by the ambitious environmental bill.

What they need to do first is reevaluate everyone who lives in those public houses because I'm sure that some of those people do not qualify to live there. Some of those people just got it from an older relative and do make money but refuse to move because it's almost free housing. Also, there are actually people who rent these places out on Airbnb which is ridiculous. Then they need to start moving the elderly people who live there alone into one bedroom apartments instead of their 2 or 3 bedroom apartments but they need to give them incentive to move like fixing up the one bedroom apartments really nice and good to make them want to move into them. Then they need to start renovating the place due to the fact that the buildings are very old and are filthy. The government shouldn't be putting up more infrastructure if they know that they cant upkeep it. They need to fix the buildings that are already there. They also need to assure that only actual citizens are living in these places because why should any newcomer foreigner or illegal get free housing?

The Ghost of Andy Warhol said...

This AOC. Doesn't she ever give it a rest? She's approaching her 15 minutes on the stage. Time to get the hook?

AOC is a Rock Star and has raised tons of money to get re-elected !

Tell Soros flatulence is not acceptable in Civil Society so good MBAs delegate it to cows.
We would rather die of a bullet or red meat heart attack than legume flatulating cancer or Alzheimer's with polysyllabic casuistry dignity. That is the glorious young turks of creative magog destruction of the Anarchic Tradition of the American Revolution to end the oppressive past-worshipping slavery of 'civilization'.

>This AOC. Doesn't she ever give it a rest? She's approaching her 15 minutes on the stage. Time to get the hook?

If only. She's raised more money for her reelection campaign than anyone else in Congress, even Nancy Pelosi. And 90% of it comes from out of the state. The rest of the country is very committed to keeping her as our problem.

What do you expect from a barmaid? She talks like she's back serving drinks working on a big tip from a lush that will listen.

These people are mentally disturbed. Same goes to the Global Warming cult, to the Global Cooling cult to all idiots and lowlifes that want to steal more money for their fucking scam!

Anonymous #1 got it right. Those things all need to be done, the sooner the better. And at less cost than a bazillion dollars.

So what are you going to do about it? She was elected because of low registered turn-out.Get off your asses and vote fer crissakes. But most of the sheeple in her district would rather watch daytime TV than get off their butts and vote.

> cult
Has anybody exposed Landmark's control of New York politicians?

Why would all them babymakers, brats and good for nothings getting free stuff and living 24-7 "Miller Time" and fiesta beans on the taxpayer dole want to give it up and go to work?
Them people workingin green technology's like solar, geo-thermal system no less?

This Cortez woman is crazy and hasn't a clue what it would take to make them tenements' energy efficient.
You would near need to knock them down and rebuild them with miles of geo-thermal tubing buried underneath and more miles plumbing logistics and HVAC to go with it for every 30 or so units to get even 20% more efficiency.

The amount of BTUs you can get of solar cells, a watt of electricity or a cubic foot of gas, foot of buried geo-thermal is finite and until Cortez can magically change the laws of physics she's just dreaming.
Also 200-300 years to pay off what would be obsolete in 20-30 years
Again, she's batshit crazy should take a new job on TV as comedy relief.

The idea of getting residents to work at public housing seems like a great idea. Those jobs for those peoples will curb unemployement,no?

""Those jobs for those peoples will curb unemployement,no?""

NO. Those peoples don't want to work, they only want the checks and free stuff.
Many are single moms with lots of kids with no known fathers for the government to go after. Since they are technically caregivers they ride free, as long they have a child under a certain age or pregnant.


Spot on my friend. That's why voting is nothing, but a charade. If voting would make any difference they would make it illegal. This way all get an illusion of choice.

Chuck Rat Batty is running
Shaniyat Chowdhury against Meeks.
Hear that Scherie Murray?
Run in your own back yard!

@ kapimap: No,it will not create real jobs, it ill create more taxes on the back of those who do real jobs in the private sector. The solution is that AOC checks with a psychiatrists, and the voters learn how actually economy works before casting a vote.