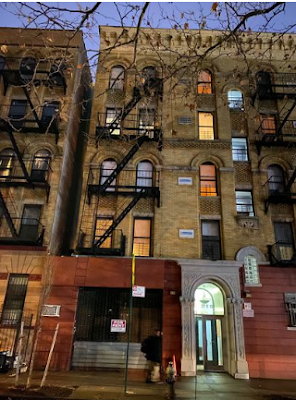 Ashley Taliercio and her two children have been in their Harlem apartment for three months, but it feels like years.

Each day they’re forced to walk a gauntlet of squalor: caved-in ceilings, used condoms, cigarette butts lining the stairways and constant cold inside their claustrophobic studio.

All of it has begun to numb the 30-year-old mother.

“There’s roaches, there’s fighting. There’s people doing drugs in the hallway,” she told the Daily News, her son crying in her arms, her daughter sitting stone-faced on the bed they share. “It’s not safe. But it is what it is.”

Taliercio lives at 148 W. 124 St., one of 14 buildings in Upper Manhattan and the Bronx the city is planning to buy from Mark Irgang, a landlord who already earns money from the city by housing homeless people in emergency “cluster-site” housing.

The land deal, which the city has treated as a closely guarded secret since announcing it in November, is the second part of its plan to phase out cluster housing by buying it and converting it into permanent affordable apartments.

The practice of housing people in cluster, or scatter-site, apartments has come under fire because the units cost the city a fortune to rent, and are often in a terrible state of disrepair.

Buying the Irgang’s 14 apartment buildings outright will also cost the city, however. Property records show the buildings are worth at least $41 million.


And it won’t just cost in terms of taxpayer money. Buying property from shady landlords does not happen without at least some political fallout. The purchase price in phase one of Mayor de Blasio’s cluster site conversion plan was a major headache for him both before and after the deal’s completion.

He came under fire earlier this year when The News revealed the city would be buying 17 buildings from notorious landlords, Jay and Stuart Podolsky. That was phase one of the plan. The brothers ultimately ended up making $173 million on the deal — despite one city appraisal that valued the properties at just $49 million. The city comptroller launched a probe into the appraisal process, which is ongoing.

Further complicating matters in phase two is that the controversial Acacia Network manages some of the Irgang properties.
Posted by JQ LLC at 5:40 AM

He'll have them thrown out on the street to become homeless and use your tax dollars to warehouse them in a shelter.

Oh affordable apartments like those in LIC that lay half empty because nobody can afford them?

Seedy slumlords come out on top, once again. You can run a place into the ground and the City will just buy it off of you. Sends a message to small LLs like me that doing the right thing isn't rewarded: doing the WRONG thing, however, absolutely is.

So Deblasio is rewarding people who deserve jail with taxpayer money? Well above and beyond their actual costs?
How did we let this con artist into Gracie Mansion?