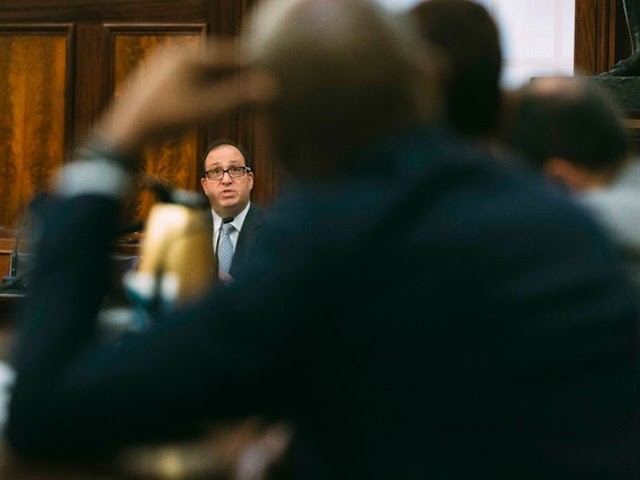 
In the basement of Laron Harmon's South Ozone Park home, no space went to waste. It was fully furnished, and Harmon kept all his clothing down there. It's where his daughter, who was back home from college for Thanksgiving, had put her clothes into the washing machine. His 10-year-old son's toys and bicycle were there too.

About 2:30 a.m. on Nov. 30, that basement started filling with waste. Harmon had gotten used to sewage and flooding issues in the three decades he'd lived there, and he cleaned out the sewer trap in his basement twice a year. But he had never seen anything like this.

"By nine o'clock in the morning, I had close to four feet of sewage in my basement," he said.
Harmon was one of four South Ozone Park residents who recounted tales of raw sewage flooding their homes that morning as part of a City Council oversight hearing Wednesday on how city officials dealt with the crisis, which affected an estimated 74 homes.

"I'm one of those families that had to sleep in their car, in my driveway with my children," Harmon said in his testimony.

Nearly two weeks later, residents like Harmon continue to grapple with the aftermath of the sewage that devastated their homes. Harmon said he still hasn't gone back home, where there's no heat or hot water. Instead, he's living in a hotel.

"I've never seen nothing like this before," he said. "This was a disaster."

City Council representatives lambasted the Department of Environmental Protection, which oversees the city's wastewater plants and sewer system, for being slow to respond to the crisis and promoting a narrative that blamed the backup on residents pouring grease down their drains.

"They certainly didn't deserve to be publicly shamed in the midst of a tragedy," City Council Member Adrienne Adams said.

Adams said her constituents' calls to 311, the city's emergency hotline, went unaddressed for hours and that it took the Department of Environmental Protection hours to arrive at the scene and start fixing the issue.

Department of Environmental Protection Commissioner Vincent Sapienza said crews had arrived that morning, hours before Adams claimed, but acknowledged that issues communicating with 311 representatives meant they were slow to realize all the flooding complaints were connected.


Some lost prized possessions, like clothes, toys and furniture. Others said they waded through knee-deep muck to try to stem the tide of raw sewage. One man questioned how he would ever get the stench of human waste out of his basement, where the wastewater rose more than four feet.

Inside the City Council chambers on Wednesday, South Ozone Park homeowners took turns describing the impact of the sewer backup that flooded dozens of basements during Thanksgiving weekend.

The wastewater affected about 80 houses in the early morning hours of Nov. 30, destroyed belongings and filling home with a lingering odor.

“It was almost like I was in a horror movie,” said Kari White, president of the 149 Street South Ozone Park Civic Association. White described moving from house to house in his neighborhood as wastewater filled neighbors’ basements. He said he refused to even enter one house because it was the stench was so foul.

Comptroller Scott Stringer, who is tasked for making sure these residents get compensated for their destroyed belongings, did not show up at the hearing.

It's a horror having 4 feet of sewage in your basement,it happened to me in bayside at least 6 times,then I had a check valve put in an it stopped,don't laugh it could be you next time as North East queens rents out every basement,attic,closet and garage for money to pay the bills
Global warming is a bunch of Bull crap but carbon footprint is real,
Where do you think all those diapers and such are going? So what are we doing about it,bringing millions over the boarder to tilt our nation in one direction then there is no turning back.

Now that you folks have got it off your chests, it'll be back to business as usual. Stop voting for democrats. When people keep making the same mistake over, and over, and over, it's a sure sign of insanity. Where are you, NYC?

These people need to nut up and get over themselves. Yeah it sucks but pick up the pieces and move on.

Past generations have lived two world wars a Great Depression the dust bowl and these people are crying over a little sewage.

If a republican was in office he would be branded a detached elitist racist if he responded to this emergency the same way warren wilhelm jr did.

Agreed.
Buddy on the job says the massive numbers of 3rd world illiterate immigrants toss anything that fits down the drain, toilet channel, beach, dock ets. Nobody will admit it in the press and forget about the city official telling the truth. All afraid to speak

Diapers, maxi pads, cooking grease (sometimes in plastic baggies) creating plugs the size of Ford Econoline vans.
The grease plugs at Rockaway Blvd were so large and viscous the guys working are now using WHALE FLENSING Knife poles and hook tools to cut them up.

Fuck emm...Let the democrats get what they keep asking for.

""Where are you, NYC?""
------------------------------
Going extinct from the Hudson river east.
The third world has been replacing real new Yorkers rapidly. Also almost every person under 30 has been educated (brainwashed) to vote democrat and socialist.
Remember the millions of native American Indians who died from disease the colonists brought from Europe.
Perhaps the Seneca tribes curse is real its our payback 10X fold

"The massive sewage spill that forced dozens of families out of their homes in Queens was caused by a catastrophic pipe collapse — and not a grease clog as city officials initially claimed, a new report reveals." New York Post