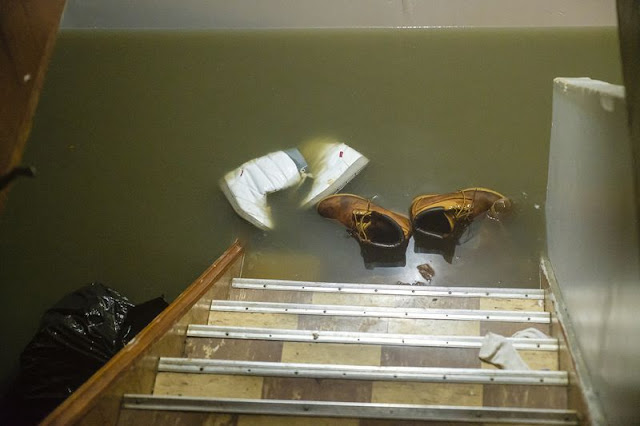 
Queens residents driven from their homes by a clogged sewer line demanded answers Sunday from city officials who said they weren’t sure when the problem would be fixed.
A jam in a sewer line serving 300 homes in a swath of South Jamaica just north of Kennedy Airport backed up raw, fetid sewage into about 80 residences on Saturday.


Officials from the Department of Environmental Protection, which runs the city sewer system, said they weren’t sure when flooded-out residents could return.


“We are alive and OK but everything is gone,” said Sani Lakudi, 50, an Uber driver who lives in the neighborhood. “My TV, printer, computer — they are ruined. We stayed up all night pumping water. We had to do what we had to do or the water would have destroyed everything.”

“Nobody from the city has come to me,” Lakudi added. “We are doing all the work ourselves.”


Streets were blocked off, including 133rd Ave. near Inwood St., as crews pumped out of the blocked sewer to keep the smelly, stinking waste from pouring back into homes across the 15-square block area affected by the crisis.


Residents were asked to turn off their heat, hot water and electricity while the problem was addressed.


City officials on Saturday said that 300 homes were affected by the sewage backup. On Sunday, Timbers said that figure was the total number of residences served by the affected sewer line, and that only about 80 of them were flooded.


“We don’t know when it will be fixed,” said Timbers. “People should contact their home insurance carrier. The DEP has been helping people fill out claim forms against the city.”

A bypass system to prevent further basement flooding was to be finished by Sunday evening, Timbers said.

A lot of this has been happening as Obama's shovel ready projects at prevailing wage put the new sewer lines at the wrong grade of elevation.

Here's a tip: Don't flush your shoes and boots, moron!

In The New York Post - DEP blames Thanksgiving for sewer back up !

The composition of the clog was unclear, but the DEP noted that “grease, fat and oil” — common by-products of last week’s Thanksgiving feasts — were the “No. 1 cause of sewer backups.”

"DEP officials are not sure why the sewer line clogged. The agency’s commissioner, Vincent Sapienza, said on Saturday that the clog appeared to be caused by people pouring grease down their drains on Thanksgiving, a comment that angered residents."

Grease from Thanksgiving????
What a fucking idiot. Typical of the boy mayors administration.

>A lot of this has been happening as Obama's shovel ready projects at prevailing wage put the new sewer lines at the wrong grade of elevation.

Hmm losing a tv computer living and in an illegal basement apartment???? Small price to pay for being stupid.

Pouring grease and garbage down your sink and toilet is a common thing in poor neighborhoods.
Almost everyone there does it--it's probably handed down from generation to generation.

The new homes by St Luke in Whitestone built the sewer too high and use a pump.
Before they were occupied, power failed and the basements flooded.