D.E.P. immediately blames 300 homeowners for the rivers of feces in their basements 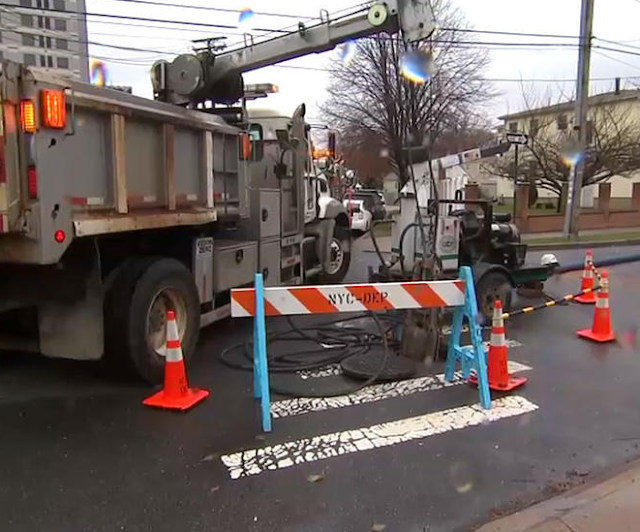 New York City residents are dealing with awful and vomit-inducing conditions days after a sewer backup forced them to leave their homes. Officials say the disruption pushed human waste into about 300 homes in Jamaica, Queens.

They think cooking grease poured down the drain might be the culprit. The city’s water agency says drinking water is safe and unaffected.

Cynthia McKenzie said she woke up around 3 a.m. Saturday to an odor she thought was a gas leak, only to realize that sewage water was rushing into her basement.

“When you open it, it just smells,” she said. “It makes you want to vomit. We have to pack up all the clothes.”

Raw sewage. There were worms coming out of the toilet. Sludge. Feces. All kinds of stuff," said South Ozone Park resident Gwen McElroy.

Why does the city (mainly the D.E.P.) think the residents are at fault and are sticking with that theory before they actually find the cause? This preemptive determination smells shittier than the stench and the gallons of biological waste they are hosing back out.
Posted by JQ LLC at 9:02 PM

There has been a lot of experience with these fat globs that can clog sewer lines. It is a repeating problem around holiday cooking times. This time the problem was large enough to clog entire line. Why harsh on DEP for the truth, they did t pour grease down the drains. I am sure a lot of those homeowners did not pour grease either but enough do to cause the problem.

I would ask every single person who's home is filled with shit who they voted for. I am willing to bet over 90 percent voted for the current batch of buffoons we have in office now. So you get what you voted for.

When you vote for politicians that are only concerned about the rights of criminals and illegals, and being politically correct and woke all day long this is what happens. They dont care about the working class of people and the actual real infrastructure issues of the city, and this is the result.

Could you imagine the outcry if this happened at Rikers or to a bunch of illegal immigrants? There would be protests and calls for accountibility all over the news. But it happened to a bunch of working class people who own homes, so no one cares other than to put it in some small article in the newspaper.

So enjoy your shit stained basements knowing that the politicians you elected care more about non citizens and criminals rights than your own, which you have been taxed out the ass for for all these years.

DEP shouldn't blame the residents per se. But it's obvious what the problem is - too many people - too little infrastructure. But what they heck - let's invite more and more people into our sanctuary city, let's look the other way at illegal basement apartments, let's close hospitals and firehouses, let's open more Starbucks and Internet Cafes, etc.

Cooking grease down the drain IS the culprit.
Yes, holiday cooking times are the worst for sewers. Stupid or lazy tired people don't put the pan grease in milk containers to throw out in the garbage
Add all the garbage in the streets
When the grease hits the cold water it turns, snowballs into a fat plug of soap like substances. When the water in the street line is high from all the holiday toilet flushing and water use these grease plugs backfloat into the sewer lines from the houses, jam check valves, etc.
Has anybody experiences the shit they cook and HOW they cook in that neighborhood ?
Drive past on a hot summer day with the windows are open and take a good wiff.

Its worse then the greasy curry cooking going on in Queens Village.

Grease clogs have been a problem in flushing for 40 years thanks to all the Asian restaurants. Why not Jamakeamehappy?

Well if the city knows this problem exists, why the dont flush,roto rooter or something as a preventative measure? I'm hoping the city or whoever will start to examine the other pipes in the boroughs.

If the clog is on the Upper East Side,they will fix it and reimburse everyone quickly. If it is in southern Queens, they blame the residents and stall.

Of course the homeowners are at fault. They use the system,no. The system should be serviced by dep, cause its they job.

Would imagine the dry leaves had alot to do with it ad wrll.

Grease usually gets trapped in the home, not out in the street.

A lot of residents where out of town during the holiday also. But the city did change it's narrative quick fast in a hurry.

AOC and all the Democratic Socialists will fix this. AND they will fix everything else as well. Just "look" confident.

"Grease usually gets trapped in the home, not out in the street"

No grease traps in those old houses.
Same in Ridgewood and most neighborhoods however these people are habitual cultural slobs, chicken fryers and 3rd world slobs with other horrible greasy cooking diets who never learn.
Some restaurants are required to have grease traps but that depends how grandfather coded they are.

If each family uses 1/2 gallon of cooking oil you will get at least 1500 gallons of the original cooking oil not including the animal fats and glycerin's added to it.
Its over 1/2 an oil delivery truck of used nasty high viscosity cooking grease!!!

I love holiday time in Queens, I get to buy another classic car thanks too all the idiots flushing grease and trying to "tune" their own oil burners.
I been thinking about a red or pearl Porsche 928 for knocking around

The pipes in downtown Flushing get clogged constantly because of the grease restaurant owners pour down drains and catch basins .

The citizens should get together and file a class action lawsuit against the city for damages and pain and suffering.


You mean the citizens should get together and take class education on healthier cooking!!
--AND why you DONT throw all the oil from frying chickens, lambs, goats, pork, collar greens, bread crumbs and dripping pan grease down the drains and toilets.
The city needs to impose a mandatory grease trap law and stupidity tax on these slobs.

The Italians cook some of the same crap but they don't throw grease down the drains and toilets. Likely because Italians usually have plumbers in the family and know the costly messy consequences.