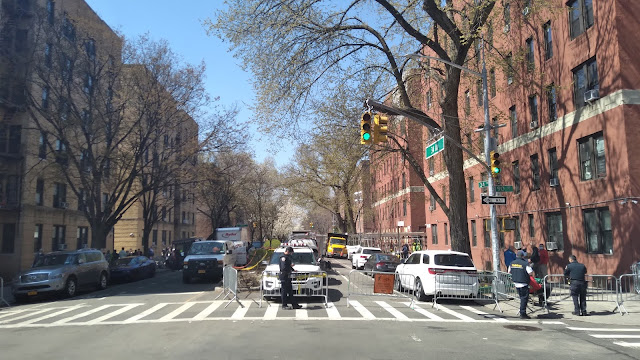 The City Council voted overwhelmingly on Thursday to make the Open Streets program, launched a year ago during the pandemic, permanent. There were only eight No votes.

The driving force — scratch that — the walking and biking force behind the program is Councilmember Carlina Rivera, who was the lead sponsor a year ago of the original bill creating the program. Council Speaker Corey Johnson was a co-sponsor. The initiative was approved last April with the stated purpose of increasing space for social distancing amid the coronavirus pandemic. At that time, it was said that Open Streets would affect 1 percent of the city’s roadways.

Though COVID is now on the wane, the Council’s vote on Thursday not only made the Open Streets pilot program permanent but expanded it in several ways.

With the legislation’s passage, the city’s Department of Transportation will now be required to operate a permanent program for Open Streets program, which will be managed either by D.O.T. or local community organizations.

Also, D.O.T. will now be required to conduct annual evaluations of existing Open Streets to determine whether to enact permanent design changes — such as transforming them into shared streets or pedestrian plazas, raising the street grade or removing parking.

According to a press release from Rivera, “D.O.T. will be required to annually evaluate and report on any existing Open Streets to determine if any could benefit from a permanent suite of street changes. These include but are not limited to conversions into a shared street or pedestrian plaza, the addition of bicycle parking, signage, street markings, installation of bollards or street barriers, tree plantings, parking removal, street furniture and accessibility improvements, including raising of the street grade.

“Any conversions to permanent shared street or pedestrian plazas would satisfy benchmarks established in the Streets Master Plan, allowing for a more effective, community-led transition to a more pedestrian-friendly city,” Rivera noted.

In addition, Open Streets operators will now have the ability, when they apply, to designate parking spaces that they want to use for programming or other uses instead of vehicle parking. These uses could include event space or “parklets,” for example.

The picture above is one of the alpha open streets that were approved during the pandemic in Jackson Heights. And it should look familiar because that's one of the open streets where an apartment building went on fire and displaced 400 people.

Thanks to lefty loon leaders that were voted in by the smart New Yorkers !
The war on cars continues...

I’m sure the over privileged car owners will throw a tantrum.

So says the whiny, privileged people who don't own cars or anything else except an iphone.
Rightttttt !
"Privileged car owners"= "Free parking, free to pollute and free to kill without penalty. Time for NYC car owners to start paying up $$$$ for their privilege"

We all know they are supported by developers who want to rid communities of single homes with a car parked at the curb and shoehorn every square inch with buildings.

City Council is out to lunch.

Someone needs to rein these bike nuts in. These kids of bullied New Yorkers enough and it's time we show them what happens when you get on the wrong side of real New Yorkers!

Is this is part of AOC's New Green Steal ?

The left hates cars almost as much as it hates guns and freedom.

Wait for the first car to bang into a 'shanty' full of diners and filled with people who will get killed and or seriously injured. That incident in Astoria foretells the future.

The lawsuits will be thick with three defenders:

The 'shacks' will vanish in a week or so.

"Cars are 2-ton weapons that can kill and we need to start treating them as such."
Mystery Man Gianaris

1.Umm, Mike does the restaurants (or should we say the money guys behind them) in your neighborhood make big donations to you?
2. Does this mean you are getting rid of your car and will bike everywhere?
3. Or is this a gambit to show how 'woke' you are?

- everyone is still thinking of how things would have been so different if you did not take away all those jobs and money from your stunt with Amazon. Why don't you come down to Hunters Pt Park this summer at night and hang out with their replacement crowd you put in there?

Car owners are leeches. Free parking, free concrete, free to pollute, free to kill, and still they whine about cyclists. What a bunch of cry baby’s.

Why don't you come down to Hunters Pt Park this summer at night and hang out with their replacement crowd you put in there?

Why should he? Mystery Man Mike did what he set out to do - his actions ensure that the local development boys have jobs.

If he couldn't do it they would make their donations to someone else who could.

Queens - the Wild East (the sound of a cracking a whip)

No one listens to Trans Alt but the politicians (and the media they control) because they know their controllers in development could build more and make more money while their shills and stooges in TranAlt make stupid comments about banning cars simply to lower the carbon footprint.

You and I both know that TA nitwits will not be riding bikes when they start families in the burbs or turn 50 or so.

"TA nitwits" are getting the Vanderbilt Motor Parkway repaved for my bike riding !
Just saying ...

Cmon man I need to ride my bike Fat !
Some Queens Crap readers hates bikes almost as much as the enviroment/fresh air and exercise.

The streetsblog assholes don't have the balls to leave NYC.

The TA nitwits aren't sucker punching women and old people on the streets and in subways !

And on tonight's episode of Why I have contracted the Commiecuntaphobia Virus in 2020-21 !

Blaming "The bike zealots" is fabricated outrage !
I own one car one suv and four bikes and pay taxes/reg fees/ car ins to use the streets when I ride my bikes or dive. How is that destroying NYC ? Explain please...