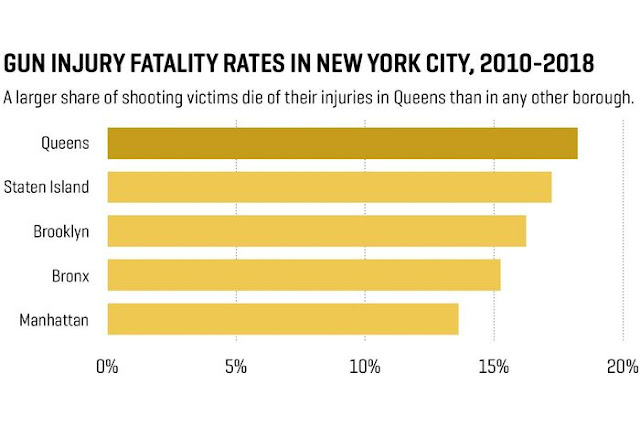 
During the first 2020 presidential debate in June, then-candidate Mayor Bill de Blasio touted New York City’s drop in crime. But even as the number of shootings has dramatically decreased across the city over the past decade, a troubling trend has emerged: The proportion of people dying from gunshots has been rising in some pockets.
Data obtained from the New York Police Department and analyzed by The Trace/Measure of America/THE CITY shows this problem has been most severe in Queens.
We mapped the 12,000-plus shootings recorded by the NYPD between 2010 and October 2018, and our analysis found that the further away someone was from a Level I or II trauma center when they were shot, the more likely they were to die.
Nowhere fared worse than neighborhoods in southern Queens, particularly those below Hillside Avenue, where more residents live further than three miles from a trauma center than anywhere else in the city.
There used to be more trauma coverage in the borough. But in February 2009, two hospitals closed, and one of them contained a Level I trauma center.
In the following two years, the gunshot fatality rate in Queens jumped from under 16% to more than 23%. That put the borough’s gunshot fatality rate 30% higher than in the rest of the city.
Since then, every year except for 2016, the death rate from gunshots in Queens has been higher than in the city as a whole.
“How well your trauma system works, and how good your care is across the country is a big mosaic, and where you are will determine your outcomes,” said Dr. Robert Winchell, the former chair of the trauma systems committee for the American College of Surgeons.
Today, most areas of New York City have access to multiple trauma centers while southern Queens has only one: Jamaica Hospital Medical Center. But financial documents, audits and state reports indicate the facility is ailing.
The hospital was in the red 12 of the 13 years between 2005 and 2017. It finished that year with a deficit of more than $66 million, according to IRS filings and an independent audit.
“I’m not sure how you keep the doors open with that,” said Winchell, who is also chief of New York-Presbyterian/Weill Cornell Medical Center’s trauma division.
I'm not sure you can either when the city would rather spend $11,000,000,000 on tower jails.

One big reason that we've lost a lot of hospitals is that they were financially bled out by having to treat illegals. Having no insurance or family doctor, the illegals use the hospital ERs as their family doctor, going there for every little thing. And the hospitals are not allowed (STUPIDLY) to ask if they are documented citizens; they HAVE to treat them. That's why you wait hours in an ER, taking your place in line behind the illegals clogging it up. And when nearby hospitals have to close, and you have a critical, life-threatening emergency, your ambulance has to go further to reach the next nearest hospital. Minutes really count if you've had a stroke, a heart attack, an accident, and people are dying because they don't have those extra minutes. Thanks, illegal scum and thanks, libtard politicians forcing us to provide people who don't even belong here all the services to which they are NOT entitled--even if it means citizens dying.

Besides lack of hospitals in the area, the BIG issue is why are these shootings rising and rising (along with other crime ) in the area. I mean what are all those career politicians in the area doing for all these years. Sure I don't expect to solve every social issue in that area, but what have they done to even slightly improve the area, even with just quality of life issues such as garbage dumps, garbage, illegal parking, double & triple parking, over development. Names that come to mind, Meeks and Comrie. And what about all those so-called church leaders. A community is only as good as the people in it.

It doesn't make sense why Queens Hospital is not filling the role of a level one trauma center. Also the gunshot rate is extremely low for a city of 8 million people,.01875 percent. But as for Queens, I would agree, one trauma center per 2 million people seems a bit sparse. Having two would double down on borough coverage and save some lives. Upgrade Queens Hospital!

Well since the city had to close a couple of hospitals, they could have had mary immaculate hospital in Jamaica but that hospital was terrible and it had to close. They also had st. John's hospital on queens blvd but that closed down. So east queens doesnt really have any hospitals left really. You have st John's Episcopal in the rockaways and queens hospital and flushing hospital. The majority of people though either go to queens hospital or LIJ and manhasset. Queens hospitals met their demise many years ago.

Look all these issues, often like someone with lots of medical problems, has one root cause.

The Queens Democratic Party has hollowed out government to suit their purposes. Your quality of life, your very existence, takes a back seat to building the Party and furthering their careers as well as the interests of their donors.

In other words, a bunch of fascists. Remember, Trump's first experience with politicians came from his home borough in ... Queens.

Woah, hold on a minute here!

Where are the screeches of "reeeeee" from the progs and liberals that could be heard from Proxima Centauri about the easy availability of guns and moar gun laws? Where's Andy Cuomo thundering a sermon from the podium about how many bullets can be in a gun or for more stringent red flag laws? All we get is some sheepish hand wringing about not enough hospitals and trauma centers.

Our ruling class is concerned about shootings among black people insofar as increasing homicide stats make them look bad, but only wounded, meh. And as long as it wasn't some white soo-premacist doing the shooting (which triggers the aforementioned shrieks of reeeee!), it's okay.

Besides, our Masters are concerned with far more important matters such as school children drinking too much chocolate milk in school or the need to ban meat from school lunches.

Ah, how our ruling class hates us plebs- all of us with no exceptions.

Perhaps the residents of Queens just have better aim.

They are better shots in SE Queens.

No one is screaming - take the unlicensed guns out of the hands of black career criminals.
Why is it okay for black & illegal alien criminals to have guns?

Amazing how the mayor seems to forget all about Queens when it comes to funding anything besides unwanted bike lanes and tower jails.