de Blasio and Banks exporting homeless crisis to other states 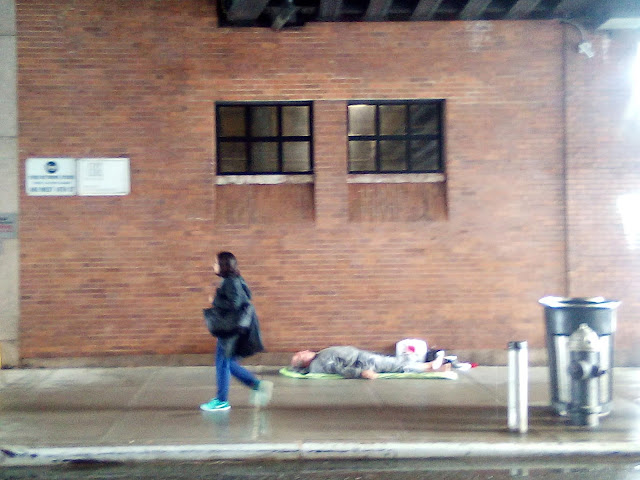 
New York City generously shares its homeless crisis with every corner of America.

From the tropical shores of Honolulu and Puerto Rico, to the badlands of Utah and backwaters of Louisiana, the Big Apple has sent local homeless families to 373 cities across the country with a full year of rent in their pockets as part of Mayor Bill de Blasio’s “Special One-Time Assistance Program.”  Usually, the receiving city knows nothing about it.

City taxpayers have spent $89 million on rent alone since the program’s August 2017 inception to export 5,074 homeless families — 12,482 individuals — to places as close as Newark and as far as the South Pacific, according to Department of Homeless Services data obtained by The Post. Families, who once lived in city shelters, decamped to 32 states and Puerto Rico.

The city also paid travel expenses, through a separate taxpayer-funded program called Project Reconnect, but would not divulge how much it spent. A Friday flight to Honolulu for four people would cost about $1,400. A bus ticket to Salt Lake City, Utah, for the same family would cost $800.

Add to the tab the cost of furnishings, which the city also did not disclose. One SOTA recipient said she received $1,000 for them.

DHS defends the stratospheric costs, saying it actually saves the city on shelter funding — which amounts to about $41,000 annually per family, as compared to the average yearly rent of $17,563 to house families elsewhere.

But critics says the “stop-gap solution” has been wrought with problems, and ultimately has failed to help curb the city’s homelessness.

Not only are officials in towns where the city’s homeless land up in arms, but hundreds of the homeless families are returning to the five boroughs — and some are even suing NYC over being abandoned in barely livable conditions. Multiple outside agencies and organizations have opened investigations into SOTA.

“We were initially seeing a lot of complaints about conditions. Now that the program has been in operation long enough that the SOTA subsidy is expiring, one of our main concerns is it might not be realistic for people to be entirely self-sufficient after that first year,” said Jacquelyn Simone, policy analyst at Coalition for the Homeless.

DHS said 224 SOTA families have ended up back in New York City shelters. The agency did not answer The Post’s repeated requests for the number of families who wind up in out-of-town shelters.

“We suggested that DHS reach out to people as their subsidy runs out to confirm they will be secure and not have to re-enter shelter, but the agency told us they have no plans to do that,” said Legal Aid lawyer Joshua Goldfein, whose firm represents SOTA families who say the city pressured them to move into New Jersey slums, then ignored calls for help.
Posted by JQ LLC at 5:18 AM

What we need is all states in the USA be right to shelter just like NY. If states don’t want it then charge them for taking care of the residents.

OOh good. So I can go to New York and get sent home free with a loaded EBT card for rent, food and new furniture. I was wondering how BeeBee & BoBo went to New York and came back with a new furnished rent free condo.

Another deBozo waste of our hard earned money. Stop wasting our tax dollars on this crap! Excessive free handouts to homeless, millions blown on a bogus mental health program (which has no measurable results), new PRISONS!!! Stop investing money in the bottom of the barrel of society. Invest more in schools, beautifying the city, etc. I can't help we have so many homeless here, it's damn expensive to live here and they need to go to cheaper places and try to start up, now I don't mind if we give them a bus ticket, but a year of rent is ridiculous! And of course, as the story points out, who is to stop them from coming back and now to sue the city, ha, the nerve! But that's what Bozo gets for getting involved, constantly opening cans of worms hoping he can get the scum of society to care about themselves, and we're the losers paying for his social experiments.

I dont think its such a horrible idea. That free tax payer money can go a long way somewhere else especially if the persons decide to go back to their home state where things might be alot cheaper. New York City cant become a sanctuary for all. We have other problems to deal with.

So, after a "free" one year fully pay vacation at another state, they are allow to come back for more and also sue for more free money..Can't wait to leave...

I Have One Word "WORKFARE" !

People need help getting their life in order...

The left: "It is immoral to deport illegals"
The left: "Let's Deport our homeless !"

SIMPLE SOLUTION NOT TALKED ABOUT:

Bring good paying jobs (including unions) back to the USA (including manufacturing), companies keeping up with salaries to reflect cost of living/inflation and STOP with the over-inflated housing costs. I mean what do you expect when all three of the things happen for decades.

Mayor Fugazio just doin' what you folks elected him to do. Waste your money. Destroy your city. You all elected him, so deal with it.

Send em to Los Angeles. At least it's warm and they like em.

Idiotic thinking, just the kind of thinking that puts an even bigger idiot, trump, in the White House. Democrats really need to stay away from these really dump policies that cause voters to vote elsewhere. Democrats need to go back to what they once was, the work class people and the middle class, not the dumb twitter crowd (which makes up very small percentage of the population), the idiot "woke" crowd and every small marginal group. AND enough with the identity politics and the flavor of the month. This is killing Democrats, who I still feel is better than the new republican party or the Party of Putin/trump.

The Democratic Party is the party of has beens. Some of you just haven't got the message yet.

Anonymous said...
The Democratic Party is the party of has beens. Some of you just haven't got the message yet.

AND do tell what is the Republican Party, certainly not the Republican party I grew up with. These new clowns, thanks to lil' clown Putin puppet trump are as usual for the mega rich, majority are mo longer patriotic because they side with Putin/Russia and they don't care about the working class or middle class (but for decades they never really did, but at least put on a game face).

The problem in this country is the two party system. A parliamentary party is what is needed, since the two party pretty much just splits people down the middle and most people are not just black and white, so they end up voting for the lesser of two evils. Both parties need to find their way back since they have both gotten off track and do nothing for the people anymore or the damn infrastructure, which that should be a win win. You fix a falling apart infrastructure, you create plenty of good paying jobs for the middle and lower class, people then have money to spend, improve their lives and pitch into the economy. THAT s how the whole middle class started to begin with. Everything else is just bullshit.

Good I'm glad they bus them elsewhere. Half of our homeless dont even come from here anyway. They should be sent back to their own states or countries.

Every city does this and always has. The real story was when DeBlasio took office and canceled the existing program. Which, IIRC, was just giving them one way bus fare, not actually paying their rent.