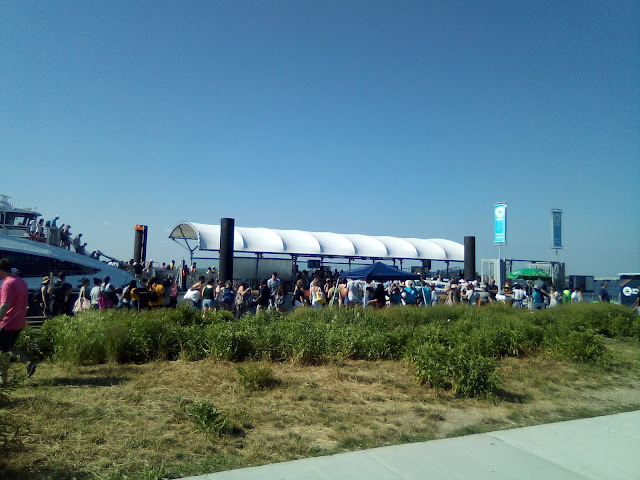 
Riders of Mayor Bill de Blasio's subsidy-soaked ferry system are significantly richer and whiter than their mass transit counterparts, according to new data reluctantly released by the city.

The long-sought figures reveal that 64 percent of ferry riders are white, with a median income ranging between $75,000 and $100,000. By comparison, studies have shown that two-thirds of subway riders and three-quarters of bus riders are people of color, with median incomes at around $40,000 and $29,000, respectively.

The disparities are likely to intensify criticism of the troubled transit project, which will cost New York City taxpayers more than $600 million over the next three years. In order to keep the price of a trip equal to a subway swipe, the system currently benefits from a per-rider subsidy of about $10, set to jump to nearly $25 on some newly-expanded routes, according to an analysis from the Citizen Budget Commission.

Faced with questions over the ballooning price-tag, de Blasio has repeatedly championed the service as an antidote to transit inequality, part of his broader agenda to make New York the "fairest big city." A spokesperson for the Mayor's Office did not respond to inquiries about whether this new breakdown in ridership would force him to reevaluate that position.

The Economic Development Corporation, the quasi-public agency that operates the system, previously declined to provide data to back up that claim. The results of three previous rider surveys were not made public, and the agency has ignored multiple freedom of information requests sent by
Gothamist and other media outlets.

The new demographics were shared with the media in a slideshow marked "not for distribution," which has not yet been posted online. An EDC spokesperson would not say why the slideshow was being withheld from the public.

Is anybody going to factor the $10 subsidy per rider with the free shuttle buses the NYC Ferry provides? 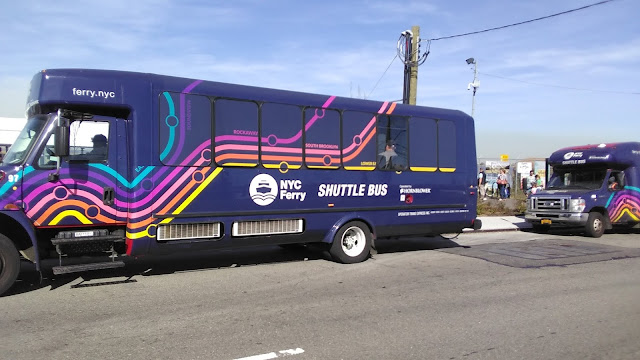 In April, The Post demanded the statistics compiled by the Economic Development Corporation about the $637 million NYC Ferry system’s ridership under the state’s Freedom of Information Law — only to be repeatedly rebuffed and told the search for the records was still ongoing.
However, EDC revealed the existence of the data by leaking a presentation summarizing its findings to another newspaper Monday night.

“It violates the Freedom of Information Law,” said John Kaehny, an open-records expert who runs the good-government group Reinvent Albany. “It’s really unacceptable — and particularly lame.”
The Post filed the FOIL request on April 15 asking for “the results of the demographic survey of boat riders, by line and by stop, if available,” as well as for contracts and other related documents.

The agency confirmed it received the records request on April 22 and later released the contract and some supporting paperwork, but never provided the crucial ridership data.
Instead, it claimed in letters dated May 20, July 5, Aug. 2 and Sept. 6 that agency officials were “continuing to search for additional documents.”

However, EDC’s 13-page presentation summary reveals that as it stonewalled The Post and others, it had already conducted at least three surveys of its ridership.

“This is the 4th onboard survey conducted in NYC Ferry’s 2 years of service,” it disclosed on the second page of the presentation.

The document shows that the previous surveys covered summer 2017, winter 2018 and summer 2018. The most recent survey covered in the memo examined ridership from this summer.

“This is really not acceptable conduct by any government agency,” said Susan Lerner, the head of watchdog group Common Cause New York. “The data is subject to FOIL, there is no excuse for playing games.”

“Certainly the spirit of the law has been violated,” she added. “This sort of game-playing should not be countenanced.”

Recall that Mayor de Blasio broke the "spirit of the law" with his illicit pay to play Campaign For New York PAC he ran in City Hall and still avoided indictments from Attorney General Cy Vance and acting Southern District Attorney that replaced Preet Bharara. So whatever the spirit of the law entails is pretty much dead.

So what do the non-white ferry riders make? Incomplete article?

So white, so what!

This is news? I lived in NYC for decades and this has always been the town's hidden secret. Closet racism!

Socialism at it's finest.

The ferries, or at least the Far Rockaway ferry, is/are great. Weird that the agitators are absurdly trying to make a racial thing out of it, but if they're right, well, it's nice that DeBlasio did at least one thing for the 'white' community of NYC.

Thanks for finally talking about >"NYC Ferry so white"
<Loved it!

In other news rich people get off the subway on the upper east and upper west side and poor people get off in the south Bronx, what’s the point of this ,rich people buy condos by the waterfront you needed a study for that

Re the Astoria ferry specifically, this would be surprising, as the ferry is next to the Astoria houses, which have a large minority population. In this case, the ferry lives up to the promise of providing convenient transit for people who previously had a long indirect trek to Manhattan. For most Astoria houses tenants, it previously involved a bus to the train or a very long walk to the train. The ferry is a major improvement, and the deBlasio bashing can be held for the other issues that he can legitimately be bashed for.

You know what the point of this is? The point is that the city was so concerned about the optics of the predominant ferry commuters that they withheld info from FOIL's for 5 months.

de Blasio and especially the EDC deserves repeated bashing for this. Especially the latter whose members have conflicts of interest involved with the NYC Ferry.

So you are demanding racial quotas for ferries.We should study how much the non white people are getting from the government and see if adds up to the $9 subsidy that the workers probably pay in taxes

The point is that the deBlasio adminstration claims to be progressive and the savior of minorities, but in reality that is far from the truth. Looks at environmental racism in this city where all the garbage dumps are located, look at the deteriorating conditions of some neighborhoods (some the fault of the people, most the fault of this administration for doing very little), look at where most of the homeless shelters are located and on and on and on.

The Left will complain about EVERYTHING.

Quite frankly, This ferry is basically a ship of fools. It's mostly being utilized by the hipster gentrifiers in Astoria/Long Island City to get to their summer breeding ground in the Far Rockaways. Is the ferry doing anything to relieve the overcrowding on the trains? What is the return on investment? The observation about the ferries being so "white" is just that. Duly noted. The bigger issue is the cost, and the lack of transparency.

The ferry is clearly racist. We must cease all operations until we can find ferry passages to South Jamaica, Brownsville, Wakefield, etc to have diverse, inclusive ferry transport for all New Yorkers.

Surely, those towns you mentioned would be content with more buses. Which the mayor has ignored while allocating money for these gentry boats and BQX studies.

Re "Anonymous Anonymous said...
The point is that the deBlasio adminstration claims to be progressive and the savior of minorities, but in reality that is far from the truth. Looks at environmental racism in this city where all the garbage dumps are located, look at the deteriorating conditions of some neighborhoods (some the fault of the people, most the fault of this administration for doing very little), look at where most of the homeless shelters are located and on and on and on'

I totally agree that garbage facilities, drug treatment centers, homeless housing, sewage treatment etc. etc. are clearly not distributed equitably among the neighborhoods. But this has been this way since 1900 (or the dawn of modern history). DeBlasio is no worse than his predecessors in protecting high income areas from whatever might offend them.

What color do they think people who live in the suburbs are?

Are there many minority dominant suburbs?

Are they going to complain next that the train cars from the end of the lines are often predominantly minority?

Stupidest article in a while.

Oh boy, who comes up with these articles. If you mad cause someone is doing better than you go better yourself. These people always want some pity. Screw you, you want to have a ferry commute come live near where the ferry service is at. What about all those central park west residents or other areas who take the same train as your petty self. #peopleneedlifes