Architects and engineers have a way to save Rikers plus provide it with ferry service. 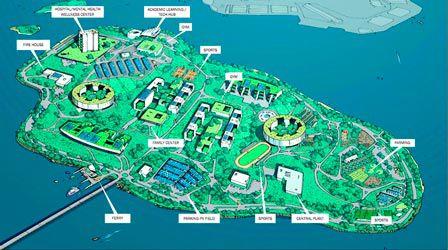 
Can ferry boats be the way to stop a bruising battle over New York City’s jail problem?

A group of designers and engineers who live and work in Downtown Manhattan unveiled a plan last week that outlines in detail how to rebuild Rikers Island and use secure buses aboard ferries to transport prisoners to and from court.

It is one of the first specific, workable alternatives put forward by opponents to Mayor de Blasio’s sweeping plan to replace Rikers with four borough-based jails, including one in Kew Gardens behind the Queens Criminal Court building.

The City Council has scheduled a crucial vote on the mayor’s jail plan for next Thursday.

At bottom, the 49-page ferry proposal was drawn to upend the mayor’s $11-billion plan — $9 billion for the jails, plus $2 billion to repurpose Rikers as a multiuse city facility — that would take a decade to complete.

Local groups are bitterly opposed to the proposal that calls for the new jails in largely residential neighborhoods, as are criminal-justice reformers who want to see Rikers closed but oppose constructing new lockups.

The reimagining of Rikers calls for the city to demolish “every building” on the island and build a series of smaller, low-rise jails — each with a different level of security.

Renderings for a reconfigured Rikers include open spaces, sports facilities, a family center and a small farm.

Connecting a rebuilt island jail system with the boroughs by ferry “liberates Rikers” from the necessity of moving hundreds of prisoners being held on charges before conviction each day on long bus rides through city streets to the courts, said architect Bill Bialosky, a spokesman for the group.

A group of about a dozen volunteer architects and engineers has been working on the plan for about a month, meeting regularly at the Lin Sing Association, the century-old Chinese-American organization on Mott Street, with community leaders.

Ferries, said Bialosky, are “the answer to the problem.”

Ferries would also be a good commuting alternative for the families and friends of prisoners.

Why didn't de Blasio and his bullshit city Economic Development Conspirators provide a ferry pier at Rikers in the first place? Well now you know.
Posted by JQ LLC at 4:05 PM

Why not just build a courthouse on rikers island then instead? I agree with just trying to Build a ferry service if that's what the real problem is and if they dont want to put a court on rikers island. I dont think that the court issue is the problem. The problem is we have an idiot mayor who wants to line his pockets with money from developers. As soon as these open, these newly built buildings we all know will be apartments that nobody can afford. He really is a huge shit, so dont give him that much credit.

The issue is tgat island is prime real estate for other tgings. City is looking to make a buck.De Blasio is an underhanded piece of crap .

Skype is cheap for court proceedings, but there is no graft in that

There is already a garden maintained by inmates at Rikers. There is a lot at Rikers that they have not explained to us.

The rendering looks great and offers different options for security and even recreation which seems more "humane" as Bozo was going for but this plan was already shelved as Bozo and that wacko Corey Johnson are content on destroying neighborhoods with wasteful hi rise prisons. By the way, when that Johnson wacko runs for mayor, please please please get out the word to NOT vote for him. He is on board with all the Bozo crap and would be an extension of the nightmare we are living now.

there is a pier at rikers

No shit. Someone tell the NYC Economic Development Conspirators.

Actually, build above all corresponding court houses. If the can build on air rights in the city, they can do it elsewhere...

Lawyers make lots of $$/hr.
If they had to travel to Rikers it would cost them money.

BUILDING ATOP OF COURT HOUSES MAKES ALOT OF SENSE. I'M SURE TRUMP WOULD LIKE TO MAKE THAT HAPPEN ONCE HE GETS IMPEACHED AND HAS TO GO BACK TO DOING REAL ESTATE.

Chip & tattoo and deport all the illegals in it and would be plenty more room. Toss them in tents citys with suicide pills out in the Sonoran desert if they come back.
1/2 the problem's will be solved in this city.

3/4s of the killers, violent inmates and gang members in Rikers are not from this country.

and I wonder how much money Bialosky gets out of this?

Why not just build a courthouse on rikers island then instead?
----
Oh that is easy - all you machine loving socialist leaning Dimmicracks need to live next to the problems created by the jerks you mechanically reelect into office.

Lets put the jails and all the folk spawned by your elected officials programs and social policies right smack dab into the middle of your communities.

You make it. You live with it.

No fucking lawyers !
Half 1/2 these criminal's in Rikers are not citizens and should not be entitled to sanctuary protections, new jail towers & lawyers on our dime.
Hang or deport them all back to the shitholes of Somalia, Mexico and Central America where violence, and murder is the norm!
Domesticating wild animals into a civilized society cannot be done
Liberal bleeding heart shitheads are sinking all the country's city's faster then the Titanic.

Why not just build jails next to the courts?

de Bozo just don't get it. We don't want it to be easy for folks to get to and off Riker's, that's why we put it right in the twirling vortex of Hells Gate

"Why not just build a courthouse on rikers island then instead?"

HOLY CRAP!! I NEVER THOUGHT OF THAT BUT IT MAKES FUCKING SENSE.

"Why not just build jails next to the courts?"
Because they (Crooked elected Dems) can make more money off the tax payer !

Here is what voting is about according to Tammany Hall v2.0:

They want to make a ferry service so when Deniro & his Hollywood elite pals build their studio on half of the 11 acres of Steinway Piano factory they wont have to see uncivilized animals In There Neck of the woods now. Wake Up!

There's nothing to save. It worked perfectly as a prison. The Dems are just trying to sell pie in the sky as usual and screw the neighborhoods of NYC.

Finally,. some sense, a plan that acknowledges how horrible things are on Riker's Island without wanting to import those horrors into residential communities.

Of course, with this clownshow of an administration, nothing like this was ever considered. Would have been nice if these experts had put forth this plan months or years ago, instead of on the week of the vote.

It was once Berny Kirik Island untill he got arrested and sentanced.
Then it went back to Rikers