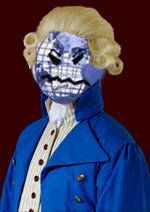 Posted by Queens Crapper at 3:42 AM

May the crap always run free!

who's face was there before?

Time to throw the lazy asses out of office.

Maybe Queens Crap will be the next Broadway blockbuster, on par with "Hamilton". Crappy makes me happy...

The collapse of western civilization is inevitable.

Happy 4th of July to all

May Crappy and all of the loyal QC readers continue to hold the idiots in public office accountable.

"I have always been among those who believed that the greatest freedom of speech was the greatest safety, because if a man is a fool, the best thing to do is to encourage him to advertise the fact by speaking. It cannot be so easily discovered if you allow him to remain silent and look wise, but if you let him speak, the secret is out and the world knows that he is a fool." - Woodrow Wilson, May 10, 1919, speaking in Paris

The Declaration of Independence

The unanimous Declaration of the thirteen united States of America,

When in the Course of human events, it becomes necessary for one people to dissolve the political bands which have connected them with another, and to assume among the powers of the earth, the separate and equal station to which the Laws of Nature and of Nature's God entitle them, a decent respect to the opinions of mankind requires that they should declare the causes which impel them to the separation.

We hold these truths to be self-evident, that all men are created equal, that they are endowed by their Creator with certain unalienable Rights, that among these are Life, Liberty and the pursuit of Happiness.--That to secure these rights, Governments are instituted among Men, deriving their just powers from the consent of the governed, --That whenever any Form of Government becomes destructive of these ends, it is the Right of the People to alter or to abolish it, and to institute new Government, laying its foundation on such principles and organizing its powers in such form, as to them shall seem most likely to effect their Safety and Happiness. Prudence, indeed, will dictate that Governments long established should not be changed for light and transient causes; and accordingly all experience hath shewn, that mankind are more disposed to suffer, while evils are sufferable, than to right themselves by abolishing the forms to which they are accustomed. But when a long train of abuses and usurpations, pursuing invariably the same Object evinces a design to reduce them under absolute Despotism, it is their right, it is their duty, to throw off such Government, and to provide new Guards for their future security.--Such has been the patient sufferance of these Colonies; and such is now the necessity which constrains them to alter their former Systems of Government. The history of the present King of Great Britain is a history of repeated injuries and usurpations, all having in direct object the establishment of an absolute Tyranny over these States. To prove this, let Facts be submitted to a candid world.

In every stage of these Oppressions We have Petitioned for Redress in the most humble terms: Our repeated Petitions have been answered only by repeated injury. A Prince whose character is thus marked by every act which may define a Tyrant, is unfit to be the ruler of a free people....

....and by Authority of the good People of these Colonies, solemnly publish and declare, That these United Colonies are, and of Right ought to be Free and Independent States; that they are Absolved from all Allegiance to the British Crown, and that all political connection between them and the State of Great Britain, is and ought to be totally dissolved; and that as Free and Independent States, they have full Power to levy War, conclude Peace, contract Alliances, establish Commerce, and to do all other Acts and Things which Independent States may of right do. And for the support of this Declaration, with a firm reliance on the protection of divine Providence, we mutually pledge to each other our Lives, our Fortunes and our sacred Honor.

People do not learn that if you do not remember history you will be DAMMED to repeat it...

My history lessons taught that the founding fathers were brave, brilliant men. Current history lessons say they were just a bunch of old white European slave owners who screwed the Indians. I think I'll go with my teachers rather than the current crop of teachers who only got their job because they are bilingual.

it is amazing how many 15-40 year olds do not know who FRANCIS LEWIS BLVD. was named for ? see wiki& NARA

Have you ever wondered what happened to the 56 men who signed the Declaration of Independence?

Five signers were captured by the British as traitors, and tortured before they died.

Twelve had their homes ransacked and burned.

Two lost their sons serving in the Revolutionary Army; another had two sons captured.

Nine of the 56 fought and died from wounds or hardships of the Revolutionary War.

They signed and they pledged their lives, their fortunes, and their sacred honor.

What kind of men were they?

Twenty-four were lawyers and jurists. Eleven were merchants, nine were farmers and large plantation owners; men of means, well educated.

But they signed the Declaration of Independence knowing full well that the penalty would be death if they were captured.

Carter Braxton of Virginia, a wealthy planter and trader, saw his ships swept from the seas by the British Navy. He sold his home and properties to pay his debts, and died in rags.

Thomas McKeam was so hounded by the British that he was forced to move his family almost constantly. He served in the Congress without pay, and his family was kept in hiding. His possessions were taken from him, and poverty was his reward.

At the battle of Yorktown, Thomas Nelson Jr., noted that the British General Cornwallis had taken over the Nelson home for his headquarters. He quietly urged General George Washington to open fire. The home was destroyed, and Nelson died bankrupt.

Francis Lewis had his home and properties destroyed. The enemy jailed his wife, and she died within a few months.

John Hart was driven from his wife's bedside as she was dying. Their 13 children fled for their lives. His fields and his gristmill were laid to waste. For more than a year he lived in forests and caves, returning home to find his wife dead and his children vanished. A few weeks later he died from exhaustion and a broken heart.

Such were the stories and sacrifices of the American Revolution. These were not wild-eyed, rabble rousing ruffians. They were soft-spoken men of means and education. They had security, but they valued liberty more. Standing tall, straight, and unwavering, they pledged: "For the support of this declaration, with firm reliance on the protection of the divine providence, we mutually pledge to each other, our lives, our fortunes, and our sacred honor."

They gave you and me a free and independent America. The history books never told you a lot about what happened in the Revolutionary War. We didn't fight just the British. We were British subjects at that time and we fought our own government!

Some of us take these liberties so much for granted, but we shouldn't. So, take a few minutes while enjoying your 4th of July holiday and silently thank these patriots. It's not much to ask for the price they paid.

Remember: freedom is never free and patriotism is NOT a sin, and the Fourth of July has more to it than beer, picnics, and baseball games.

I now see the meaning of freedom is never free and how it's been abused by the most jingoistic people and opportunist politicians since 9/11.

I Like to add that the holiday is not about blowing up m80's and ostentatious dept. store fireworks shows.