Paul Vallone is hiding something everything 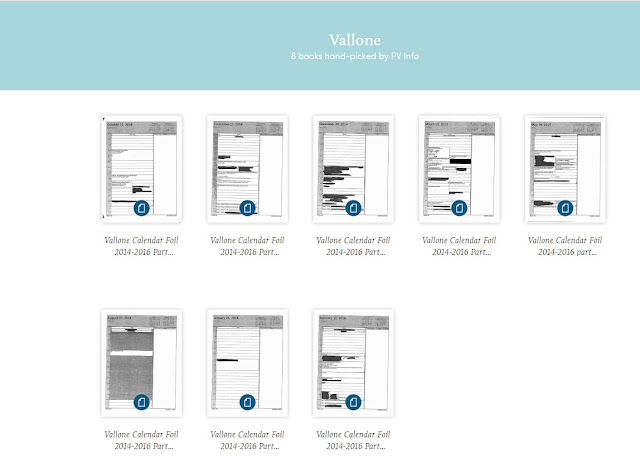 A constituent of Paul Vallone FOILed his schedule from the last couple of years and found that he doesn't want you to know who he is meeting with most days.
Posted by Queens Crapper at 12:00 AM

Good ol Stinky.Spends his days checking up on Hollerin Halloran, Al Centola and The HANAC Senior Center up in da Pernt.

So typical of Vallone. sneaky

I hope I'm not to optimistic, but there must be an ongoing federal probe of this turd also.

It's no secret that Paul "Vallone-y baloney" lobbies for developers.
You know,....these are the SOBs that ruin your neighborhoods.
DUMP VALLONE and improve our quality of life!

Why is this not surprising? It looks like over half of his "meetings" are redacted. If they're not related to his work, what the heck is he doing all day? We know the answer, unfortunately..

Coincidence? I think not...

There IS no hope for the City and State of New York---it's been 'Hijacked-And-Held-Hostage' by corporate fascism (just like everywhere else!), as vile, government bought, cradle-to-grave, sycophantic thugs like Paul Vallone (and all other politically worthless 'slugs-'n-thugs' within his dynastic fiefdom!), all of whom continue to behave like the hyper-corrupt, dishonest, dishonorable, disloyal, derelict betrayers of all public trust, ethics and integrity that they have ALWAYS embodies and represented--BUT, now they do it with impunity--and, OPENLY practiced!

But, one cringing look at what the monstrously failed face of disgraced leadership looks like at City Hall (for the past 2.5 years--and, beyond to the previous-and-lawless administration), should be enough for all residents of this ravaged city to never expect to see any and all honest, ethical, INCLUSIONARY, NOT FOR SALE leadership (that leads by example), before the end of their natural life spans, ever again--exactly how these voracious thieves of epic, humanitarian (and ecological) fail like it!

Only one more year until we have the opportunity to dump Stinky. Please, I beg any Democrats that want to run against him in the Primary to unify around one candidate and avoid splitting the vote and allowing him to be nominated, as happened last time. And let's hope the Republicans can come up with a viable candidate, too. No one party should take NE Queens for granted.

Sarc...peddle your nonsense elsewhere. Stick to the local subject.
Vote for whom you wish in the national presidential election, but get off of you soapbox RE Hillary or Trump.
Uh, that's Hillary with an "a" not an "e" BTW.

The local dummies will re-elect Vallone anyway.
He's the brand of beans that everybody recognizes on their supermarket shelves.
Who the fuck is going to run against him that is capable of unseating him?
Fighting an incumbent, with loads of cash and soldiers, is near impossible.
LOL!
Maybe Bernie Sanders might consider it.

The Republican Party regainng northeast Queens?
LMAO!
Are you daft, man?
Those days are done! We live in the vast Democratic Dictatorship of Queens!
"Virginia" Joe Crowley runs the show!
The clubhouse rules.

I am sure that the is some white knight thinking they can unseat Vallone.
Yawn! Lots of luck.

Al Centola needs to run against him.

Rumor has it ultra liberal Steve Behar is planing to take on stinky.
Behar may be an ultra left wing nut that will destroy the very fabric of District 19 but he is in good with the parkside group asn thats where the money flows. Should make for fun times.

But isn't Vallone a tool of the developers? Or he's just tight with the non-Parkside ones?

Me, I'm waiting for Paul Graziano.

Centola unseat Vallone?
Somebody is on happy juice.
Don't get me wrong, Al is a great civic leader.
But a match for Vallone?
I think not.

No onr is a match. The REBNY money.

As a first term councilmember, Stinky hasn't had too much time to spread the money around his district, and has probably been taking more into his pockets than giving out to neighborhood pet projects. If the opposition could coalesce around one solid candidate, that person can give him a run for his (or REBNY's) money.

HE is a PHONY.

Wow, this post is good, my younger sister is analyzing these
things, thus I am going to convey her.

I employed the wall to keep myself from falling.