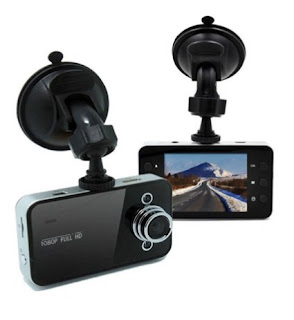 State Senator Jose Peralta and Assemblymember Alicia Hyndman introduced legislation Thursday that would give drivers of non-commercial vehicles insurance discounts if they install and operate a dashboard camera.

They say it is part of an effort to promote greater safety for drivers and pedestrians.

In a statement, Senator Peralta said that devices capturing road footage can provide visual evidence and protection for drivers and pedestrians in case of accidents.

“We must ensure that we use available technologies to promote safety,” Peralta said. “With a dashboard camera installed in your car, you can provide footage in case of hit-and-runs and accidents. You can also fight a ticket, and you can even capture footage of unrelated events as you drive.”

If the proposed bill becomes law, New York would be the first U.S. state to require car insurance premium reduction for vehicles that have an operating dashboard camera.
Posted by Queens Crapper at 5:51 AM

More big Brother taking our personal freedoms away !
Hey why not give discounts to parents of small children who put chips in their kids ?
When will technology stop taking away our liberties ?
EZPass-Cell Phones- Lo-Jack-Credit Card Chips and on and on it goes...
That dashcam will be used to help the police and insurance companies screw you in court.

The people who drive aggressively and fail to follow traffic laws probably won't sign up for this. It should be mandated for all commercial drivers. That might finally change some of the ridiculous behavior.

Disgusting. Most of the people I see with dash cams now are the ones that are already up to no good, or looking for trouble.

I'll probably get a dashcam to protect against negligent and reckless walkers/bicyclists/drivers and an increasingly corrupt and fraud-riddled system. I don't really need extra incentive, my premiums are high enough and I'll do what I can to keep them from going even higher. I'm already fearful enough I'll hit a jaywalker, wrong-way cyclist, or non-local turning on red that I'd like to have solid evidence in the form of camera footage.

I'd expect widespread use of dashcams would keep premiums down anyways - it would, for example, help resolve liability and track down uninsured/underinsured hit and runs.

Anon #1, even if you don't have E-Z Pass or your own dashcam, Big Brother uses ANPR (license plate reading) and face recognition on street and intersection cameras, toll plazas, and in those camera boxes mounted on the trunks of police vehicles, so they're already following you closely.

You previous posters don't appreciate the issue: dash cams are opt in. If you don't want one, don't get one. They aren't going to capture your face in any significant detail in a moving vehicle. Conscientious drivers are the MOST LIKELY to sign up for this: dash cam users are typically people who've been victimized or nearly so by reckless drivers in the insurance estimate or court system and aren't taking any more chances with the "he said she said" of an accident. Go look up "Russian dash cam videos" to see what kind of scum bags are out there just looking to shake down innocent people and the public at large. Driving is the highest liability activity most of you will do in life, and one stupid pedestrian or daredevil cyclist could be calamitous for you in an accident when the cops come to the scene and you're the one who was operating a multi-ton steel cage. If you think it works against you in a particular case, take it off the dash, pull out the chip, and destroy it. You aren't required to offer that information.

A picture is worth a thousand words.

Anon #1 is right ! We are losing our liberties one by one. The indubitably fact is big government is not taking them away we the people are giving them away. NYC is a liberal cesspool with all the regulations and taxes put on the middle class while the rich and poor get away with murder.

Well put 100% correct,
One stupid pedestrian, daredevil cyclist or lousy driver can cost you your home and future earnings when some jackass get crippled and the lawyers come.
I have a dash cam its saved my $1000's every time some lousy driver backed up on my Corvette hood (wile in with the car) and still claims they didn't do it. (The cops no longer show up unless somebody's hurt) These cameras are not on a network they just loop record on a SD card.
Too many lousy drivers and especially this tsunami of immigrant accident scammers who have learned how to work the system. You need to cover your ass these days.
I'm adding a rear camera next week.

I don't drive like an asshole, I own and value my classic GMC Jimmy, Thunderbird & Vette

Anything with 30 frames per second in 1080p is sufficient. (Fast enough to capture clear motion, and detailed enough to capture a license plate if the bum drives off.) They can be had for about $50 - $100 on amazon. Get the biggest capacity SD card the camera supports - storage is cheap.

RE: "Joe,what's a good dash cam ?"
I have the DBPOWER 2.7" 1080P ($30-50 bucks on ebay, $80 at Sears)
Low profile hides easy under mirror and uses up to a standard 32 gig SD card,
it also has a Supports Night Vision, Motion Detection, G sensor so if your hit or have an accident it stops & saves the recording so not to loop over.

Hint. Instead of powering with cigarette lighter plug wire it direct to the fusebox or tap power from a vanity light on the bottom of the rear view mirror.It will sense the voltage increase from you alternator when the engine starts (13.6 volts) and turn on and off automatically.
You can also hit manual record or motion detect record if the engine isn't on (parking)
These are the basic features you need, as with everything you need to do a little homework to tweak you needs.

YES ---refresh rate of 30 frames per second in 1080p IS A MUST !!!!
I cant stress this necessity more !
However keep in mind at that refresh rate in 1080P you will chew near a gigabyte a minute.

Get a BlackBox G1W for about $40 and a 32GB card and you're good. If you're worried about getting rear-ended, get one for the back window too.