The wheel no one wanted 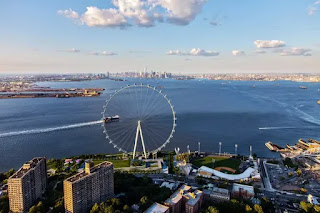 Developers behind Staten Island’s ambitious New York Wheel have officially pulled the plug on the project, ending months of speculation about its future. Staten Island Advance broke the news of the development, which is a startling turn of events for a project that was once touted to usher a renaissance for the North Shore section of Staten Island.

For over a year now, the observation wheel project has been beset by infighting, construction woes, and more recently, legal troubles. The developer, New York Wheel LLC, was battling its former contractor Mammoet-Starneth on ownership of some of the Wheel’s parts, and last month a court granted the developers an extension to hire a new contractor and show that it had enough funds to procure those parts.

However, two of the lead investors in the development—Lloyd Goldman and Jeffrey Feil—later expressed skepticism about the project moving forward without significant city funding. Both mayor de Blasio and the city’s Economic Development Corporation had previously stated that project didn’t seem like a sound investment for city funds.
Posted by Queens Crapper at 12:13 AM

Why not put a local prison in it's place?

Stupid idea to begin with. I went to go on the eye in Florida which was pretty cool but it was located right next to a bunch of other attractions like a madam tussauds and the aquarium. Nobody is going to drive all the way to staten island just for a ferris wheel without no other attractions around it.

I told you this Wheel would never see the light of day or a super storm surge.

Yup, never understood the whole point. Nevertheless, my tax money wasted. I'm sure it's not dead dead-right? Nothing like this ever is (Moynihan Station, right?). In a few days or a week another "developer" will come forward to strike some kind of deal, and this will linger on for another 5 years.

A new subway line to alleviate street traffic would have been a much better idea than a ferris wheel. Staten Island is lacking when it comes to public transportation. If they wanted to build an amusement park i would have been for it just as long as it were built way south away from densely populated areas.

This giant hamster wheel is a perfect allegory for the typical, legal, working class Queens resident.

This is the kind of stupid shit the powers that be always focus on, but not on luxury frivolous things like fixing the worst subway system in the world, roads, sidewalks, affordable housing, homelessness, traffic congestion, corrupt agencies, illegal apartments, flooding, etc. No stick with Ferris Wheels, trolleys, wifi in the subways, statues and every other conceivable bullshit. If you are living on the street, you don't buy a 60 inch Smart TV.

James Oddo is more worried about this wheel than hate crimes being committed in his district and hate speech being used by his supporters.

Finally this idea has been put to rest...now maybe we can concentrate on some things that actually need to be taken care of, like the subway, the state of disrepair of streets and sidewalks, the increasing problem of homelessness. Oh who am I kidding.