DeBlasio's kicking the can down the road on homelessness 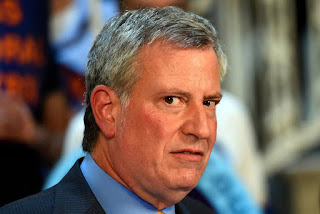 The lie began in 2014, when Bill de Blasio campaigned for Mayor on the platform of ending the “tale of two cities.” He said he would end inequality in our City. He said he would help the most vulnerable.

The lie continued in 2017 when he was reelected, and he said he would create the “fairest big city in America.”

Meanwhile, today we still have over 61,000 people living in shelters in New York City. The impacts of this cannot be understated: homeless people’s lives are endangered, their physical and mental health deteriorates, kids miss school, working people lose their jobs, and so much more. No one should ever have to face these spiraling circumstances.

Since he took office, Mayor de Blasio has continued to praise his administration for dealing with a homelessness crisis of record proportions. He’s made half-hearted attempts to deal with the immediate crisis of homelessness by issuing rental assistance vouchers that don’t cover average rents in our city. When people are able to find housing with these below-market rent vouchers, they are relegated to few far-flung neighborhoods where the housing is often in poor conditions. Seeing this lackluster attempt to help homeless people find housing, City Councilmember Steve Levin introduced a bill in January to raise voucher values to meet fair-market rent and to guarantee that voucher recipients continue to receive the assistance as long as they meet eligibility requirements.

But beyond providing New Yorkers with subpar vouchers to find housing, de Blasio has a bigger stain on his record when it comes to housing the homeless: his Housing New York 2.0 plan. Out of the 300,000 units of affordable housing in his plan, the mayor has committed only 15,000 units—five percent—for the homeless.
Posted by Queens Crapper at 12:38 AM

Did you see the video of DeBlaz being harassed at the gym by the 'homeless advocate'? Just looking at her it was clear she wasn't there to work out yet she can walk right up to him and talk to him? Where was his security?

Ladies and gentleman, the mayor of your city...

(Apologies for linking and promoting my social media account)

It'd be so much cheaper and faster to kick de BLASS-hole in one of those invasive cans that this empowered, intensely incompetent idiot (of epic, humanitarian-and-ecological fail), thinks that he can impose on residential neighborhoods with impunity.

But, before We, the People start to riot for his long overdue impeachment, followed by mandatory jail sentencing (not like fellow Shithead Shelly Silver, that maggot malignancy), let us SO ORDER restitution from his de facto, deputy mayor wife, Chirlane, and her two payroll lackeys that continue to cost hardworking taxpayers' more than $300K a year, for which there was never any public referendum, much less an actual civil service title held by 'Lesbo MacCray' in order to justify two paid, personal (Black) lackeys in the FIRST F**KING PLACE!

"Government is a disease masquerading as its own cure." -Robert LeFavre

And how many of these 61,000 people are legal citizens and longtime residents of NYC? We have illegals and ne'er-do-wells from every corner of the country flooding into NYC to take advantage of the ridiculous"right to housing" law. There doesn't seem to be any residence requirement, so people from West Virginia, Mississippi, or other high poverty states can show up, claim to be homeless, and immediately go on the rolls. Why on earth should my tax dollars go toward supporting people who don't even belong here, let alone getting big time benefits, or people who have been NYC "residents" for 30 seconds putting their hand out for benefits? With the boom in the economy since Trump, it seems that jobs should be much more plentiful and "homeless" rolls should be shrinking. And, if you're on the public dime for being "homeless", you better not be pumping out 6 kids by 6 different men.

There are not enough homeless people in the city. We need more.

There are thousands of migrant homeless and of course mentally ill (because there are less hospitals) but there are more working poor people, elderly and families that have been subjected to the shelters because of the meteoric cost of living in your city.

As for harassment accusation. That woman was very nice and de Faustio immediately blew her off and a cop dressed like a secret service agent manhandled her making room for the dope to scurry away. Besides, constituents should be able to confront elected officials, after all, we hire them every 2 to 4 years on the second Tuesday in November. It's called accountability.