Joe Crowley trying to get back in the game 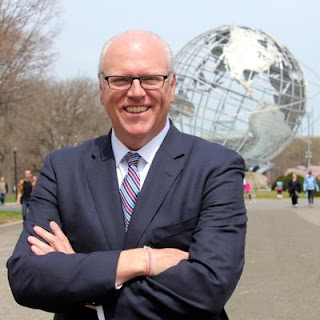 Veteran Rep. Joseph Crowley, defeated by newcomer Alexandria Ocasio-Cortez in a primary election that shocked the political world, is laying the groundwork for a comeback.

Crowley has formed a state campaign committee “Joe for NY,” and is holding a fundraiser Oct. 29 at the Fitzpatrick Grand Central Hotel in Manhattan, where the maximum suggested donation is $10,000.

According to an email sent to “Irish Americans & Friends Crowley” by Walter Swett of the firm Dynamic SRG, who is the Crowley committee’s campaign treasurer, the group was “established to position Joe for future opportunities in public service.”
Posted by Queens Crapper at 12:40 AM

I don't see why he isn't campaigning on the Working Families Party line. He would win this election. Why is he giving up?

He needs to get out there and go door to door!

He would beat that idiot ex-barista!

Will he challenge Meng in two years? Will he run for mayor in three? Or will he go after the Queens BP job if Katz moves on to the DA spot in a year?


Wonder if he is ever going to move back to Queens?

Should be "Joe For Virginny"!!!

Joe has no interest in Washington any more. He will get rich lobbying. He should just retire. His district is in trouble with the socialist. A ton of money and influence has just left the district.

Rumor is he will make on last push for a local seat then pass the baton to someone else.

Long time political hack needs a paycheck from the government.

Well he's fundraising for a state committee, not a city committee, so he is probably thinking of a state office. I don't see him going back to the Assembly or State Senate, so maybe he has higher ambitions (Governor, Comptroller, etc). 10,000 a pop, he's definitely not running for dog catcher

Quotes in the article hint he's thinking about a statewide seat. Is he thinking of challenging John Liu in a "most corrupt man in Queens" faceoff in two years?

is this a ploy to protect reich, sweeney & bolz

Joe has no interest in Washington any more. He will get rich lobbying. He should just retire. His district is in trouble with the socialist. A ton of money and influence has just left the district.

money and influence for whom? people like him made queens an ignorant backwater. when that vallonia crowd now in their 80s moves on we can start to all breath again.

Virginia Joe has no business running for anything in New York. He's already destroyed Queens and its political system. Why can't he wreak havoc in Virginia? I guess being a public servant is lucrative. Too much money to be made off the backs of the taxpayers. Wish he would just go away.

He doesn't want to be a lobbyist, he wants his congressional seat back, where he was more of a lobbyist and fundraiser than he was a legislator. He wasn't the no. 4 most influential member of Congress for nothing.

And a lot of the hack neolib democrats want him back there too, including the two shitheads that are running and ruining our city and state de Faustio and Mario's son.

This move to raise state funding was just a cunning stunt so he can raise more money legally (there's something Mario's son or maybe and hopefully Molinaro or Hawkins can take on), that's all he's adept to do, that's all these congressional huers in general know how to do.

Even if he loses he will reappear again despite being unwanted and loathed by the constituency. He's the Pennywise of Queens.

With the Democrats lurch to the Left, he has no future with the party. In truth, his is really a closet Republican, which, because of their disgust with the welfare state, want nothing to do with him as their ranks are growing daily with real Red-Dog Republicans.

Politics and be cruel, even to the mighty. He still has a place, at least until his 80 year old base dies off, but the boy, as his world of the Machine in the world of the Internet, has no future.

They're shitting in their pants. Reich, Sweeney, and Bolz have stocked up on Depends.

We're done with you. No one wants or cares about having you around anymore. Take your dirty ass machine goons down to hillbilly country while you're at it.

Crowley is just like any other white politician that is left in the Democratic party. Namely, he screws over his Caucasian consituents by pandering to minorities and the loony left while he himself lives in a gated all-white community completely immune to the havoc he helps to create.

Judge the last party chair election, the clubby world of Queens Democrat politics is coming to an end. The polyglot society that the Dems created is going to upset the whole apple cart. The Barbarians are at the Gate and they don't want no stinkin' old white folks keeping all the power. Crowley lost in this cycle due to sheer arrogance at County. But the writing is on the wall-it would have happened in the next few cycles anyway.

Catz running for Da? I hope Queens will vote for Greg Lasak.

"Catz running for Da? I hope Queens will vote for Greg Lasak."

Lasak is the only qualified candidate. Lancman and Katz are politicians first, lawyers second. Lasak should win, if only the Dems do the right thing in the primary.

"the herds of sheep voting from aging Vallonia"
If you look at where Ocasio's votes came from, they came from the herds of hipster sheep in Vallonia... It's all over for the old machine.

>If you look at where Ocasio's votes came from, they came from the herds of hipster sheep in Vallonia... It's all over for the old machine.

It's funny how that works. It's not the poor, hard working immigrants voting for socialism - it's rich white trust fund kiddies from the MidWest.

Sad. It was a great community at one time. Look what the Machine did to it.

If he holds both houses, Trump will pardon Dan Halloran and Brian McLaughlin