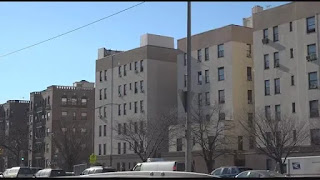 As the city phases out a controversial program that placed homeless people in often subpar private housing, a crucial question found its way to state Supreme Court in Brooklyn: Once the de Blasio administration stops paying rent for an apartment, are its residents entitled to lease it themselves?

Wednesday a state judge said no.

The jurist found that participants in the cluster-site program were not tenants in the apartments they occupied and thus have no right to a rent-regulated lease.

Unless the decision is overturned by a higher court, the ruling is likely to discourage future lawsuits by homeless people and to bolster the position of landlords, who did not want to be forced into an agreement with tenants who might have trouble paying rent.

Posted by Queens Crapper at 7:02 AM

They mean the market rate rents

WE DO NOT HAVE ENOUGH HOMELESS PEOPLE IN THIS CITY!!!!

I agree with the judge here, the city is the tenant on record for the landlords, the city is able to pay the bill. Why should the lease transfer to someone that is unable to foot the bill. That's not how it works for regular citizens right now why should it be any different for cluster apartments if they are private landlords/owner.

Non profit agencies are the tenant of record and their clients are what's called Licensee's. Typically those non profits do very little for their clients, who are left to fend for themselves. I lived next door to what's called Scatter site or cluster site housing. A developmentally disabled Haitian man lived in one of the apartments along with multiple other clients of this agency. They squeeze in quite a few people, who don't have their own room.

This means the non profit agency is their social security disability and food stamp payee. The client gets a very small allowance about $20 a month. The non profit gets government funding to function.
Haitian man sat on the stoop for many months and said hello to people. He wore a suit. Bothered no one.

Fast forward about five or six months and Haitian man, the licensee, got some new friends in the neighborhood. He began drinking and smoking crack with them, moving his location to the near by avenue in front of stores where he begged for money. This money was used for beer and crack.

I would not want him as a tenant. He could set the place on fire accidentally while smoking crack or while drunk. Or he could overdose in the premises. Either way he's a liability, as are many of the Scatter site tenants.

In my neighborhood, there are multiple subsidized housing apartment buildings,an enormous swath of NYCHA projects, assisted living centers, three quarter houses, half way houses and then the usual Section 8, Link Advantage and Link Work Advantage housing voucher subsidies with irresponsible tenants who pay less than 30% of a monthly rent. There's been rumors of a push to gentrification.
All it will do is raise the rents for the normal working people who aren't on the government gravy train but pay for it.

They should re open Creedmore for all these people or build another one. They can upgrade it and it would be wonderful for everyone. It would create jobs.

The Haitian Man was left alone to become a crack head and the non profit could care less. I haven't seen him in a very long time. For all I know, he's dead.

NYC is NOT the landlord in these situation. While the City may provide services , the tenant is an agency that aids disabled and blind populations. The agency clients are licensees who are not allowed to communicate with the landlord regarding conditions or rent. Licensees do not have the same protections are rent stablized or rent controlled tenants. They're at the mercy of the agency who has their case.