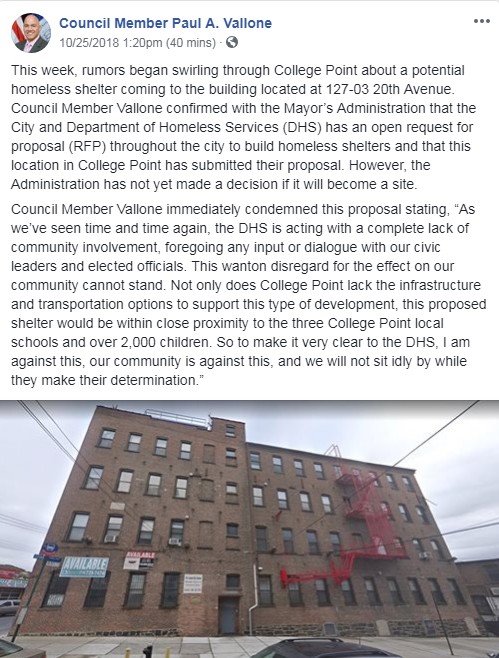 All our communities and residents need to come together and sue this administration.
The mega shelters are not helping these people and while wanting to house them is great, please NYC buy some space upstate and send them there. The land is cheaper and maybe they can find somewhere to work that mores affordable.

NYC is too expensive to expect these people to get back on their feet here, if they do not have any family or friend support to where they've landed on the streets or in shelters. They are a constant drain on the system. If the middle class is fighting to stay in their homes how do you expect those in shelters to recover?

These people should not have to just show residency in NYC - I've read articles about people having letters mailed to their friends to establish residency so they can start the process. They should have to show that they've earned income in NYC for at least a few years before falling on hard times to qualify for services. We have people from every state setting themselves up here.

I don't know what the solution is but shoving these shelters down hardworking taxpayers throats and telling them to accept that there quality of life will change is pathetic. Start coming up with plans that don't make one class of people suffer to help those who don't want to help themselves.

Let's see if Paul Vallone and Paul Graziano can stand together against this monstrosity.

And you believe Vallone? Pull your head out! If Vallone says he's against development of anything, it means you're gonna get it.

Is there any residential area in NYC that isn't in close proximity of schools?

The democrats are committed to mmaking life as difficult as possible for these communities that exhibit wrongthink.

And by democrats, of course im talking about white women.. Ya know the new base of the party. Ya know, the inhabirants of the luxury buildings that will replace your after REBNY levels the neighborhood.

The leftists know the unions and environment alists can no longer be the partys base. They must shill to sexually amoral young women.

The Truth is no community really wants a homeless shelter, whether out of mere self interest or selfishness or even just cruelness (since some people like to feel superior that way). Regardless, the best way to prevent the propagation of homeless shelters would be to encourage affordable housing by slashing property taxes for land owners willing to put up the required infrastructure to put a dent in the numbers. You know what, instead of giving tax breaks to luxury developers, give them to people who participate in Section 8, LINC - that whole process is a giant PITA and hardly worth most LL's time, from experience...but if it's a social necessity, at least TRY to grease the wheels with something approaching reasonable incentivization.

Lowering population won't happen, so it's that or being on the streets because of greed, neither is feasible.