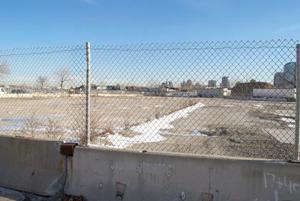 
Ever since Mayor de Blasio last February announced that six acres of Willets Point would be getting developed with 1,100 affordable housing units and a 450-seat elementary school, observers wondered what would become of the other 17 acres of Iron Triangle land owned or controlled by the city.

Four months ago, a task force came up with recommended scenarios about what should be built on the 17 acres that, according to the city Economic Development Corp., “will serve as a basis for further discussion with the community and guide principles for development of” the land.


And last week, the EDC released an illustrative proposal for each of the two scenarios.
One of them features an up-to-25,000-seat soccer stadium directly adjacent to Citi Field, which it would share parking spaces with.

A possible mixed-use district in the 17 acres is outlined in the other design. It would mainly be made up of housing units with a range of affordability and some on-site parking, though it also features space for a health center, retail and a high school.

Any concrete plan for the land in question would be formed after negotiations between the EDC and the project’s contractor, the Queens Development Group, which is a joint venture of the Related Companies and the Mets-controlled Sterling Equities.
Posted by JQ LLC at 7:01 AM

Stadiums for everyone! Let's take stock:
Barkley's Arena, Brooklyn
The Long Island Coliseum (newly renovated)
The hockey arena they want at Belmont Park
Citi field
Yankee Stadium
All those over in Jersey (4 or 5?)
Now this one...

Who knew the region could support so many? Guess they're better than crap housing and homeless hotels.

" It would mainly be made up of housing units with a range of affordability..."

This translates into Another NYC ghetto surrounded by decrepit parkland and sports stadiums.

Does the Wilpon family, owners of The Mets, care?
Hell no!
They will build it, make another fortune, then sell the Mets and get out of the future mess that they and the incompetent egotistical politicians created.

REMEMBER: The Mets are actually a real estate deal masquerading as a baseball team.

Sorry MOYA not gonna happen.If they put this idea up for a community vote or referendum it's a NO GO!!

Stop with the soccer stadium already. Stadium projects (think Giants Stadium, USTA) are used a few days a year and sit empty 90% of the time. What a waste. There are fifty more important uses for land in Queens. There is also a stadium in Flushing already--I believe it is called Citifield. It is large enough for soccer. There's another also in the Bronx.

>force dozens of businesses out of Willets Point, throw thousands of people out of work
>build affordable housing so those now-unemployed people have somewhere they can afford to live

Brilliant, par for the course with this administration

How's about offering up some land back to industrial, but with working sewage?

A college campus is a good plan as well,with a mixed use athletic fields.

A high school could be a good idea, but leaving a bunch of crazy teens to roam the area is a problem of its own.

This translates into Another NYC ghetto surrounded by decrepit parkland and sports stadiums.


Yep. It will be just like the Tennis. After the game/match is over get the fuck out as soon as possible.

So copy the Bland apts on the other side of the bridge and throw in a stadium? Sounds like a great plan for a sustainable, livable area.

Can someone tell me the purpose Icahn Stadium on Randalls Is.? Track and Field, I know of. That's it?

Socialists need to assemble to stay enthusiastic to the Cause.

The area is plenty affordable.
You can rent a bed & breakfast tent in the guys yard for $30, it includes a BBQ pit shower and bathroom. Great Mexican restaurant, catch a Lemon ice then head out for some drinks and have a good time.
July 4th is especially good, you can take the 7 train and walk up Greenpoint ave for the best view of the Macys fireworks in the city. Afterward you come back, sip some wine and watch the local populate literally set the street a fire with imported personal fireworks and nobody gives a shit. -including the cops.
Last year we set up the drums, amps & sound system and did a full band in the yard. Played some B-52s, Santana, Quiero Mas Dinero. Everybody even the all Spanish people on the block had fun without having to have blown a buttload of money.
I know this sounds a bit extreme to many but you gotta have fun and release time to time to keep your sanity in this city.

This woman (Katz) should leave things alone.
BTW:Soccer fans are the worst, she must be crazy wanting to draw this kind of vile nasty clientele into Queens. 2 weeks of USTA invasion is bad enough, MONTHS of drunken violent soccer fans brawling, puking, pissing all over the place would be pure hell. The police would be overwhelmed, the cost of overtime payouts (including MTA & property damage)would be more then a soccer stadium worth.
Think about it.

These bed and breakfast tents sound like modern day hoovervilles.

I suppose Hoovervills is what you get when you allow foreign money to coming in and jack everybody atop an already 20% lodging tax. Add some socialist maniacs inviting every freeloader, bum & illegal to your city.

What regular person has $250-$375 for a crap 8X12 average hotel room for an overnight sleep where they want you out by 10AM. Include the dirty sheets, carpets, chair and bad or no securiety.

One is much better off in a tent in their own clean sleeping bag. Wifi, your car 50 feet away, owner keeping an eye out with a baseball bat and machete. Actually the tents are pretty nice. No different then the Maho bay ones in St.John Virgin Islands @ $300 a nigh. Same design only smaller with no mosquito's, stove or fridge.

A good thing about Corona -Willets Point is the surrounding water and marshland is so toxic you have no mosquito's or worse GREEN FLYS.

What regular person has $250-$375 for a crap 8X12 average hotel room for an overnight sleep where they want you out by 10AM. Include the dirty sheets, carpets, chair and bad or no securiety."

A lot of people. According to the yearly tourist population which rivals the resident population. And foreign money is definitely being invested in Airbnb accounts that include van and tent rentals.