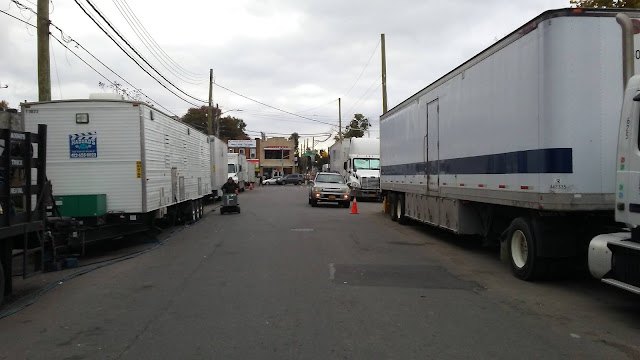 
The smile on Gov. Andrew Cuomo’s face stretched from ear to ear as he and Ben Stiller traded compliments at a Manhattan bill-signing Thursday, where the movie star thanked the governor for the state’s film tax breaks.

“The governor stood by the film and television industry over the last eight years, supporting tax breaks and creating a lot of jobs — hundreds of thousands of jobs — for people in the film industry,” Stiller said, while seated next to Cuomo.

The comedian-turned-director recently filmed a cable miniseries about the infamous 2015 jailbreak at the Dannemora prison, which features Michael Imperioli playing Cuomo, a turn of events that Cuomo has frequently joked about in recent weeks.


The Showtime drama was filmed on location upstate, which means the tax credit program Stiller lauded will reimburse the producers for 40 percent of the production’s costs. Shoots inside New York
City have 30 percent of their costs covered.

The Empire State Development agency and governor’s office were not immediately able to provide details on how much money Stiller’s production might get back.

New York spends $420 million a year on subsidizing film and television productions in the state, a program that critics blast as a waste since New York television staples like “Saturday Night Live” benefit from the program, too.

I would consider voting for the person who would rescind the tax break for SNL in the hopes that the irrelevant unfunny show would move or end because of it.

Famous people don't want to pay their fair share of taxes? What a shock!

Wasn't there a study that showed it really didn't bring in the revenue they thought it would? They have their own caterers and hire their own people, not local people and businesses?

Time to let this plan sunset. No more tax breaks for millionaires!

They should be paying taxes not getting breaks from them. All they do is inconvience neighborhoods by taking over blocks of needed parking all day when they film.

End snl? Are you anti American? What a pos.

The film industry keeps the world wanting to come to NYC, billing it the best city in the world.

This tourism thing,boosted by film and arts,is what keeps NYC economy growing.

So let's find a way to keep those jobs for NY residents only.

Why does this industry need ANY tax breaks? They are rolling in dough!

Hundreds of thousands of jobs?

I Luv it. Suckers

What dose our "Progressive" city council say about this ?
What dose Congresswomen Occassional Cortex think about this ?
Tax breaks for the "tippy top earners" in a all Blue state !
NY has turned into a real joke and the joke is on the Tax payers.
Many years ago there was a man from Long Island who rented airplane adds that I would read while laying on the beaches of Long Island It said
"Get Out of New York Before it's too late!"
Well it's too late now !

Hating SNL is anti-American, Kap? The show is awful and really unnecessary since reality has become a parody. Reading and watching the news it's hard to tell the difference between what's a legit story or something from the (old)Daily Show and the Onion.

The movie industry practically started here and it should remain here.

Creating alot of jobs my ass.

You need to be a catering, trucking "whatever" company on the mayors list or in the closed IATSE union to work in film or TV in the 30 mile zone of New York City.
You also need to be a democrat or in some kind of "club" or participate in some kind of cause so they can verify you,--and they will.
The Stiller's and all them SNL people are friends of the Governor from East Hampton.

SNL does suck and WORSE, I worked on that show.
It was a "clubhouse" reserved for gay writers, liberals, activists and propagandists. All had summer hangouts in East Hampton and Amagansett.
I was an production engineer placed in thumbscrews and eventually forced out for "not getting along with the family" including refusing to bow and clap for Al Gore in the hallway. Those shitheads made every dam person who wasn't "with them" life miserable.

Dam shame how Ben Stiller is licking the governors ass for this filthy corrupt industry, I guess Mr.Stiller still needs top billing work.
The f_ck with Silvercup, Kaufman, Stiller, Alec, all of SNL and the governor Gargoyle crew.

Isn't this a bit hypocritical?
The entertainment industry is blatantly and relentlessly liberal and the overwhelming majority hate President Trump and his policies. They especially decry his tax cuts.
But when a leftist democrat governor gives them tax cuts it's all great and wonderful.
And the claim of "hundreds of thousands of jobs" is hilarious.
Must be the new math.

"Happy 70th Birthday to John Belushi."
Ain't mothing happy about cutting off your young life via a drug overdose.

I get the subsidies, but they should be pulling in taxes in other forms on the industry - it certainly rakes in enough moolah, unquestionably! Or allow the subsidies only for smaller firms or start-ups that have zero ties to larger production partners. I have to drive around these idiots from LIC/Green point (thanks, Haddads!) constantly blocking small side-streets to film another precious episode of Blue Bloods or Person of Interest.

Andy likes celebrities, and wants to be one too.

I was waiting for Joe, formerly of NBC, to write something about this

All the points here about these celebrity crony socialists that have no problem with these tax cuts but yell and insult Stronghead Trump are 100.

The picture on the post is from a film shoot in Richmond Hill last autumn, the plates on those vehicles were from Jersey and Pennslyvania. They had catering even though there are tons of restaurants and take out joints on Liberty Ave. The city actually poured new asphalt on the street for these hacks.

When I had the House in Mattituck these SOBs would take over the whole dam street,(Love Lane) to shoot "Royal Pains".
The actors would come in by limo and hit the wardrobe trailer. The only thing the cast, crew and extras bought from a local was 6 ice cream cones from Lickety-split.
All the catering including the food truck and coffee machine was brought in from New Jersey.
I bitched in the hardware store "what is this shit, what the hell all this, Did all the idiots & nerds decide to come out this morning? Duded wearing spats and striped hospital slippers. What's the F_ is wrong with these people. Henry "Fonzie" Wrinkler turned around cracking up "its a TV show that takes place in the Hamptons" "we shoot out here because its closer". The Hamptons traffic would make time and costs impossible.

Hell--Even the cars and water bottles were towed in.
The clothing they were putting the cast and extras was ridicules, nobody wore the crap not even in the Hamptons.

Sad to see Mr.Stiller become another Hollywood asswipe, butt licking brown-noser, teacher’s pet suck up shithead bowing to a commie socialist to hold paying work.
Cuomo II, deBlasio and movie and television industry is the worst thing to happen to New York since Boss Tweed. (I now believe worse at this point after my last views from the 7 train last summer)

>>>No more tax breaks for millionaires<<<
You mean Billionaires and Conglomerate Mega Billionaires making most the $$ on these operations as we lose our streets, parking and pay for this shit.
-Amazon included.

The Governor is schmoozing these media people because he needs all of them to make a successful grab for president. --Just wait and see !!
Should be fun to see all these Communists and Socialists like Alexa Cortez, Alec Baldwin, Colonel Sanders, Cuomo, Pelosi and the deBlasios go at each others throats in 12 months.
Cortez already driving all them nuts

Ocasio Cortez is speaking at SUNY Maritime on Monday....proof that she is clueless...SUNY Maritime is military style school and I am sure that the majority of the kids parents are republican...will be interesting to watch.