Councilman Ulrich, one of 24 candidates running for Public Advocate, targets the Dope From Park Slope on his platform. 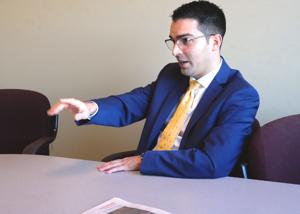 The field of candidates running for public advocate next month is starting to resemble the start of the New York City marathon. So Eric Ulrich, the three-term Council member from Ozone Park, has found a simple message to stand out.

“If people love Mayor de Blasio, if they think he’s doing a great job and think the city is headed in the right direction, then they have 20 other candidates to pick from,” he said in an interview this week with the Queens Chronicle.

“If someone is looking for someone to be a public advocate [who] is not afraid to be independent of the mayor, then I’m their candidate. That’s why I’m running.


Ulrich, who turns 34 two weeks before the special election February 26, is a popular figure in his South Queens Council district after his surprise victory in a 2009 special election and then winning re-election three times in an area that is overwhelmingly Democratic.

He is barred by term limits from running for City Council again when his current term expires in 2021.

I personally think this position is redundant, after all the majority of these candidates are already in city council, so they are already advocates for the public.
Posted by JQ LLC at 6:56 PM

Welcome back, Crappy - you were missed.

What's most troubling about the "Public Advocate" is that he/she would take over if the Mayor resigned or was otherwise expelled from office - and the latter is still a distinct possibility with The Dope from Park Slope, since two people have admitted in court that they bribed him, yet he acts like the Teflon Don.

Ulrich has a ceiling of about 20%. He could win if he raises some money. I see him and Blake (only candidate from Bronx) as candidates with natural bases that can approach 20%. Many Hispanic candidates hurts Mark-Viverito's chances, and many Brooklyn candidates hurts Williams' chances. Dawn Smalls has raised some money and could be a contender, but I don't see her base at this point. Put all this together with a February election where turnout should be about 10% and anything can happen. What makes the election so unpredictable is that there won't be polls so support is not likely to consolidate easily. That's why I see Ulrich or Blake as the most likely winners.

Curtis Sliwa is running for Public Advocate, with the pledge to abolish this worthless office.

Did Eric become a Democrat? Cuz he can't win a citywide race as a Republican. Just saying, no one can.

Thanks for this post. Now I have a reason to vote!

He's young, bright, a fellow Baruch alum, and was born and raised in the community he represents. good enough for now to track.

So happy you’re back Crappy!!
Everyone knows that the Public Advocate position is a useless waste of money. AND, everyone knows that it’s a great way to make a name for yourself if you want to run for Mayor. If we the voters can’t abolish this stupid elected position at least one of the very few few Republican elected officials in this city should be elected to it. Maybe Eric Ulrich could become Mayor. I’ve met him a few times and think he’s great!!

Not going to win.

Uhlrich persistently backstabbed Gallagher while he worked for him
Ragusa backed Uhrich over Ricotta, then Uhlrich screwed Ragusa.
Uhlric then stabbed Turner in the back.
Like Giuliani and Stalin, Uhlrich is a former seminarian. Hitler was an altar boy.
The funny part is Uhlrich probably ratted out Haggerty. He was the only one who knew.

I like Nomiki Konst. Not for public advocate, I think she's cute.

As I stated in the post, there should be no public advocate office, because voters elect candidates to be advocates for them. Maybe the office should be known as Voters Advocate?

Anyway, I, meaning my handle, is running for public advocate. Write in JQ LLC if the option on the ballot is there. Because this election is a joke.

I heard Curtis Sliwa is running on the same platform to end the position too.

Yea, and Gallagher used to make fun of Serf behind his back - literally, in the same room