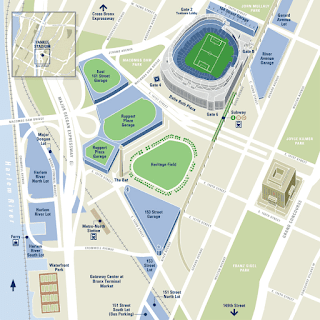 The city is owed more than $100 million in unpaid rent, taxes and interest on parking lots at Yankee Stadium constructed nearly a decade ago — with no payment in sight, documents show.

Bronx Parking Development Corp., which runs the facilities, has lost at least $28 million a year in each of the past three years because not enough Yankee fans are willing to pay as much as $45 to park there for a single game.

“It was definitely a boondoggle from a former administration, but what now?” said Geoffrey Croft, president of NYC Park Advocates, who has been monitoring the deal because it displaced acres of Bronx parkland. “At some point, the city needs to take responsibility for this horrible deal because the bill keeps going up.”

The Yankees insisted they needed thousands of additional parking spots for fans when the new stadium was built, so about 9,100 spaces were created or preserved in 2010.
Posted by Queens Crapper at 12:39 AM

Maybe since the city isn't getting paid it should foreclose on the garages , raze them and build some real affordable housing.

WTF????
Yankee Stadium with a soccer field imprint?
This is a Peccatum Mortale!

Yeah, this was a big mistake that evidently no one saw coming. With multiple subway lines, a metro north station, worse traffic every week, and an overall decline in baseball attendance, only a fool drives to Yankee Stadium anymore. Knock down SOME of the parking, and make parkland out of it. End of story.

Thank you anon 1 - 100% I agree, millions of dollars owed and not foreclosed on??
if this was a homeowner owing 1 year worth of taxes they would already be trying to get your house. It's sickening the corruption that is going on.

Could a (much needed) Queens soccer stadium be next?

Give each Yankee player a 10% paycut and send the money to Mayor Fugazio.

I take the train to the game. Also, there are plenty of bike lanes and bike racks near the stadium.

Why go to a Yankee Game when you can get yourself a Big A** Flat Screen !

Another reason to hate the Yankees; LETS GO METS!

Anonymous Anonymous said...
Why go to a Yankee Game when you can get yourself a Big A** Flat Screen !

THIS!
Last time I went to a Yankee game, a vendor stood in the aisle beside me blocking most of my view for THREE WHOLE INNINGS. After an inning of this, I politely asked him to shift up a few steps and he ignored me. Then there were the fools behind me that got up every few minutes to chat with friends seated a few rows up. They weren't even watching the game - they were playing games or watching a movie, audio on high, on their cell phones. None of this ever happens in my living room, and if I need to use the bathroom or get a drink, I hit the pause button on the DVR. Sad, but watching a live ballgame has lost most of its cachet unless, I suppose, you're in one of the expensive box seats or luxury suites.

Get seats in the bleachers next time, the intensity is contagious and they'd lynch anyone who was watching non-baseball videos.