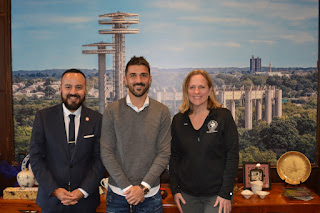 From the Queens Eagle:

A caption crafted by the press office and sent to media outlets for publication said that Moya, Katz and Villa met to “discuss the future of ‘The Beautiful Game’ in ‘The World’s Borough.’”

“One option that was discussed is a proposal to build a 10,000 to 25,000-seat soccer stadium in the Willets Point redevelopment area that would serve as home for the Queensboro Football Club, a proposed new team that would play in the United Soccer League, a second division professional league,” the statement said.

The proposal for a soccer-specific stadium in Willets Point is nothing new. Katz and Moya even formed a task force to study Willets Point stadium proposals in 2017 and Katz reiterated her support earlier this year.

“I have not made it a secret that I support a stadium there,” Katz told Crain’s in February. “I think it would be a great thing for the constituents of the borough of Queens.”

But the press statement generated significant attention among die-hard soccer fans who had never heard of a proposed “Queensboro Football Club” that would play in the United Soccer League, a 33-team professional league that is considered the second-tier of the American soccer pyramid after Major League Soccer.

The proposed club name was first reported by the website SoccerInNYC.com (full disclosure: the site is operated by Eagle managing editor David Brand).

Soccer writer Chris Kivlehan saw the post about the proposed Queensboro Football Club on SoccerInNYC.com and dug deeper into the proposal.

As of press time, Katz’ office did not respond to request for comment. On Tuesday, a spokesperson for Moya said he would get back to the Eagle with more information about the meeting.

On Tuesday night, Kivlehan shared more about what he had heard about the soccer club proposal in a post on the NYCFC subreddit.

“I made contact with a person at DV7 soccer who confirmed to me that it was something they looked at but said it was not currently an active project,” Kivlehan wrote. “This chat was in early Sept. Clearly with Villa, Katz and Moya meeting it indeed appears to be active. I heard stadium was more like 10k. I can’t see them building more than 15k for anything but NYCFC.”
Posted by Queens Crapper at 12:23 AM

But does Katz really think her immigrant family constituents could afford a $100 soccer game ticket ? This is NOT GOOD FOR QUEENS BECAUSE IT'S NOT GOOD FOR FAMILIES!

Anything to gentrify Queens hu?

Yet one more stadium? Why can't they share the Mets' Citi Field or one of the USTA stadiums?

People can watch multiple soccer games at Flushing Meadows every day. The constituency there doesn't need it and certainly they'll object to this.


Anon 2 is right, this is just another conquest by the gentrification industrial complex, for the only people that will patronize this arena when it's built will be stupid ass hipsters and yuppies. This is totally unnecessary but Katz and Moya are just starstruck idiots when they meet up with some knuckleheaded oligarch like every other hack official.

Please, it will be decades before this very boring game replaces such sports as football here, so why keep pushing this bland sport. I guess if you grew up on it, fine, but watching it, it looks like some little kids game where they just kick a ball around. What is with Katz and her constant cow towing to immigrant families, OH YEAH, votes. Otherwise she does not give a shit about them, the conditions some of them live in (illegal apartments), etc. I love far left white liberals who are always carrying a a sign, but yet do not live in immigrant communities, communities of color and really have no clue about living in them. Pretty much the equivalent of armchair sports enthusiast, that have no idea what it is like to have a baseball coming at you at 90mph.

I have reached out to Mr. Moya several times about the rise in crime in and other quality of life issues in Corona but I guess he is too busy with other things like BUILDING A SOCCER STADIUM IN QUEENS. Another case of not having your priorities straight and forgetting the needs of your constituents.

I saw this Moya guy in junctionblvd station handing out fliers during his last campaign. A dude passed by and looked at him and just kept on walking upstairs to take the train. That was the most awkward thing I have seen in a while. I thought the guy was going to do something.He doesnt have the respect he thinks he does. i wonder why .

No plans to bring the Jets back to queens - have they forgotten the Jets are a NY team playing in NJ. Why build another stadium for Soccer - the Tennis Center is under-utilized. They should have expanded the seating and planned to use that building for more than just 2 weeks in the summer. Jokers, all of them.

I guarantee that any proposed stadium will involve taking park land. USTA established the precedent. No problem, it's Queens.

Now soccer to bring in more idiots into Queens, are they nuts?
It may be a boon for hotels but not the people who live here thats for sure.

Soccer fans are idiots. Or, to rephrase that sentence using less incendiary language: when it comes to soccer, intelligent people act stupid. And yes, that probably includes some people here.
After all, soccer fans remain hooked on a sport that has become as competitive and boring as F1 warm-up laps while at the same time taking ever-larger chunks out of your salary. Smart people would stand up to such exploitation. Soccer fans prefer to revel in their "hardcore" commitment.
Even if a match is shunted to some unholy hour to accommodate such shit in Queens, many think nothing of traveling hundreds of miles to sit in a stadium with all the atmosphere of a wake, to show loyalty to your club and get loaded. The same club that's always thinking of ingenious new ways to bleed you dry.
Some fans will accept all the above, but defend themselves with the greatest idiocy of all.

Why build an expensive stadium to cater to immigrant tastes? If they want to play soccer, they have all those grassy areas in Flushing Meadow Park, which they currently use. Soccer is not yet so popular here that we need to spend big bucks on a stadium for it. This is just Katz's version of opium. It's like Marx viewed religion---the "Opiate of the Masses", something to distract people from larger issues and keep them happy. I'd be willing to bet that a very large number of those soccer players in Flushing Meadow Park are illegals. I don't see why we need to spend money pleasing people who don't even belong here.

I agree with alot of people on this thread. Citifield is definitely big enough to host soccer matches and given the fact that the most diverse Latino population lives in Queens anyways, its a no brainer !!!

MLS is a fourth tier league at best. This team has to be the bottom of the bottom.

I am for this but the Women's Pro League has been looking for a NYC home for a long time. US Women's soccer is way more popular then their male counterparts. Just sad that this could draw a lot of interest from the hundreds of new girl soccer clubs and make a nice profit as well.

I find football, basketball, and baseball to be boring. Yet soccer is by far the most profitable sport internationally without a close second. I can point to the insane parents at youth football games. But to call soccer fans stupid just shows your ignorance and racism. I guess all Europeans are morons too. Football is a violent thug sport with many of its players behaving with low class and living an appalling lifestyle. No one sees how ridiculous football has become? Americans love barbaric sports like football, boxing, and MMA. But we forget the toll it has on its participants.

Boring is a taste and preference but the Atlanta MLS soccer team sells more tickets per game than the Atlanta Falcons. Do you hear stories of numerous soccer players being thugs and criminals? Look at the colleges and their players and compare the soccer players to the football and basketball players. Academically it is not even close.

Melinda looks hotter than ever. Seems fully recovered from her cancer way back.