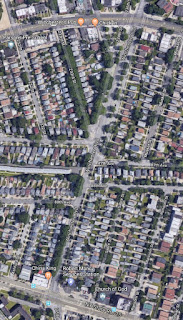 Gremlins with teeny-tiny drills are burrowing their way underneath Winchester Boulevard in Queens Village and creating pinholes in copper pipes leading from water mains to the houses between Braddock and Hillside avenues.

It’s as good an answer as the ones homeowners on Winchester are getting for why connector pipes are failing at an alarming rate; so often — on multiple occasions for individual homes in some cases — the company that used to insure the pipes has stopped doing so along that part of the street.

Tom Garrett, who has owned his home for 40 years, said pipes began failing in about spring 2015.

“My neighbor had to get his pipes replaced,” he said. “Then a woman down the street. We didn’t think anything of it.”

By the time his pipe had to be replaced for the first time, people were becoming suspicious.

He now estimates that more than 20 replacements have had to take place, including one neighbor who has required it six or seven times.

“Plumbers who’ve been doing the replacements say it’s being caused by electrolysis. Electricity leaking from somewhere causing pinhole leaks in the pipes,” he said.
Posted by Queens Crapper at 12:26 AM

One of the candidates for the area, Joe Cuncanon, was working hard on this problem two years ago.

I never heard about this situation again after the election, I thought he had fixed it?

What was he able to do?

Lack of necessary maintenance, repair, replacement of aging joints. Basic neglect because the Queens Village neighborhood is not in Manhattan!!

Exactly the same as the subway, roads, sidewalks and the rest of NYC infrastructure. No regular maintenance, skimpy on quality material, over crowding, misuse of funding, no accountability and the funneling of money to bullshit crap like a trolley. In other words, business as usual in this fucked up city.

Is the company that stopped insuring the pipes the DEP approved American Water Resources company which sends applications every few months offering coverage of pipes? So now that there's a problem they stopped offering insurance in the area. Shocking.

All the trucks from expanding JFK cargo & freight operations as the plains get bigger. Now add the population jump, all the rice, curry cooking, greasy long dish washing so much water is being pumped out the ground its now sinking & stretching pipes.
All its takes is 1 or 2 millimeters, the sewer pipes have small cracks as well but they are gravity fed and not under pressure to notice until the gap become wide enough to fill with dirt, clog and create a surprise inside the house.

The problem is not Trump but the shitty city allowing 15, 25 people in 1 & 2 family homes. These Asians, Indians and Paki's have no problem living 8 people per room or more working & living around "sleeping shift" schedules.

Another asshole Anon Queens Crapper commentator hiding as usual and stating something that was never said. While of course you idiot, Trump is not to blame for this, but he already has a long list of shit that he can be blamed for. Do some of you assholes on here just make up shit because that is what your little poisoned minds create. But keep on hiding to not "reveal" yourselves and show what utter asses some of you are.

@ Joe Moretti said...
"Trump is not to blame for this, but he already has a long list of shit that he can be blamed for."
So why not back it up Joe and give us "your" Trump list !
I'm a Independent voter Joe I put God , Family and Country first not the Party.

"Trump derangement syndrome (TDS) is a neologism describing a reaction to United States President Donald Trump by liberals, progressives, who are said to respond to Trump's statements and political actions irrationally and with little regard to Trump's actual position or action taken"

----------------
That is a laugh considering the lewd, vulgar and decisive language Trump has used and he is the President. Did you send President Trump a tweet in regard to his lewd and vulgar comments, DID YOU?

And for the other hiding behind ANON, who said he put God, family and Country first, not the party, neither do I (I have voted for Democrats and Republicans), but as an atheist, I don't put a fake idol (god) in the mix. I don't vote party, I vote for who I think will do the better job.

While there are some things Trump has done right (although he has never focused on an infrastructure bill that he talked about so much on the campaign trail), he, like others before him have done crap things, but his whining, constant childish tweeting and awful rhetoric and hateful statements, undermine anything good he has done.

1. Huge tax cut that pretty much just benefited the mega rich. AND it does benefit the rich, a fact.
2. His constant attack of the FBI is undermining and an insult to the majority who are good and honorable patriots, something he knows nothing about.
3. He dismissed the Russian cyber attacks, which have been proven.
4. He stuck up for a child molester, the despicable Roy Moore.
5. His constant criticism of the media and journalism and the whole "fake news", which again undermines democracy. It is only Fake News when he is called out on something he does not like. Remember, countries taken over by dictators have always condemned the press and then put in place a "state media". This is dangerous in the long run.
6. His constant ridiculous tweeting (and most of it is childish), overshadows any progress he does make, since he only focuses on this childish behavior.
7. His thug behavior as a President of the USA is appalling and sets a very bad precedent and example to all.
8. He has enacted things that make an already poisonous environment worse. This is the only planet we can live on at the moment and near future.

If he can let his ego get out of the way and his awful rhetoric and actually focus, he could be decent, but he cannot help himself being such a narcissist.

Joe Moretti said..."he "Trump" could be decent, but he cannot help himself being such a
narcissist."
Joe, Here is a list of things I think you should know that #Potus 45 has accomplished in less than two years !

►Move the U.S. Embassy in Israel to Jerusalem.

►Pull the United States out of the Iranian nuclear deal.

►Stand up to NATO countries for not ponying up enough money to cover the organization’s expenses and their own defense costs.

►Take on the news media and not back down, exposing bias and agenda-driven journalism intended to run him out of office.

►Put an intense focus on immigration, the importance of border security and the cost of illegal immigration, including U.S. citizens killed by the undocumented.

►Begin a dialogue with North Korea about ending its nuclear weapons program.

►Focus attention on Rust Belt states and give respect to white working-class voters, overlooked by the elites on both coasts.

►Challenge elitism and question what it means to be “elite.”

►Create millions of new jobs (the White House claims as many as 3 million) and bring unemployment down to 3.9 percent, the lowest since 2000.

►Focus national attention on the opiod crisis, including a look at doctors who overprescribe pain pills.

►Pull out of the Paris Agreement on climate change and defy global warming alarmists.

►Refocus immigration debate by ending DACA (Deferred Action for Childhood Arrivals) and trying to force Congress to confront the thorny issue of what to do with "Dreamers," who were brought to the USA illegally when they were kids.

►Shake up both the Republican and Democratic establishments and remain independent from the Washington cartel.

►Make politics more accessible to people who have rarely voted or cared about it, and widen the door of civic engagement.

Anyhow, I got roped with this American Water Resources thing...it'll be fun to ever learn if they do indeed cough up when required. I mostly hate having to carry insurance...not because of its necessity, but because of its inevitable abuse.

Never heard of "electrolysis" but some basic Internet sleuthing seems to turn legitimate responses from apparent experts, so maybe it's just the level of moisture in the water-table, or the particular material the contractors who first laid the connections used in their pipes.

DAMN, are you grasping at straws. It seems you took most of this crap off of some right wing conservative sight and few of your bullshit items are not even accomplishments. AND by the way, TRUMP is an elitist, the worse kind at that. AND independent, he is Putin's fucking bitch.