Hotel oversaturation about to hit its peak 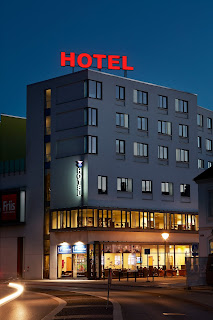 New York City’s hotel-building boom has led to an oversupply of rooms — and enticing deals for aggressive acquirers who believe prices have finally hit a bottom.

It seems we're going to have a major hotel-to-shelter conversion happening come 2020 when the city decides to bailout this industry. How many of these projects got zoning changes and variances for something the city doesn't need?
Posted by Queens Crapper at 6:29 AM

So this should mean Air BNB should be banned?

It's all good! The homeless deserve a good place to stay just like everybody else.

I think its time for government to step in and put a halt to hotel construction citywide. Also while they are it, they should also stop the construction of these cheap brick boxes with windows (a.k.a 'FEDDERS' buildings) that pop up out of nowhere.

How about converting them to middle-income apartments? Lord knows the City could use a whole lot more.

All part of the plan, Crapper.

This is exactly right--these hotels, very frequently built in areas no sane tourist would go near, were meant to convert to lucrative homeless shelters about 5 minutes after they open. They were "built to fail" on purpose so that the owners could then throw up their hands in a well-acted pose and then file to use their structure as a homeless shelter, bringing in far more income to them than the hotel rates would have ever done. And, then they don't have to leave mints on the pillows.

How about converting them to middle-income apartments? Lord knows the City could use a whole lot more.

Not really. The middle class is almost extinct in NYC.

>Not really. The middle class is almost extinct in NYC.

And this is a large part of why.

>Not really. The middle class is almost extinct in NYC.

And this is a large part of why.

Building apartment buildings is not the answer. The illegal conversions will just stay as illegal conversions and house either more illegals or more people from another state. What will put the middle class back into NYC is to stop illegal immigration, and end foreign property buying power. Our land gets sold to foreigners and our population is way out of control anymore. Only after these two things happen, then the middle class will start coming back to NYC because home and rents will stabilize and NYC will still make money off of its tourist population like it used to be. We also need to get rid of all the welfare suckers who dont even come from this state or this country. But none of this will ever happen because of the corrupt government who gets big payoffs from "human rights" groups and developers. It's nothing but a huge marketing scheme.