A disservice to parents, teachers and children 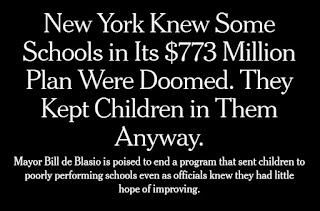 Mayor Bill de Blasio promised to “shake the foundations of New York City education” in 2014 with a new program called Renewal, a signature effort to improve the city’s 94 poorest-performing schools by showering them with millions of dollars in social services and teacher training.

A year later, aides raised a confidential alarm: About a third of those schools were likely to fail. The schools were not meeting goals that the city set for higher test scores, increased graduation rates and other academic measures — and probably never would, staff members in the Department of Education warned in an internal memo prepared for the mayor.

“In order for these schools to reach their targets for 2017, the interventions would need to produce truly exceptional improvements,” read the December 2015 memo, a copy of which was obtained by The New York Times. “Historically, it has been quite rare for schools to improve that much in two years.”

Mr. de Blasio kept most of the schools open. Now, after sending thousands of children into classrooms that staff members suspected were doomed from the start, the administration appears ready to give up on Renewal. Its cost: $773 million by the end of this school year.
Posted by Queens Crapper at 12:30 AM

This is exactly why de Faustio and that 350,000 grand a year stooge Carranza keeps deflecting with that admissions test controversy. Everything Mayor Big Slow touches turns to shit. He is still distracted with the folly of promoting himself as a "progressive" "leader".

I had a friend who was a second grade teacher and he quit because the school heads wanted him to teach kids (who barely spoke a word of English) to learn to read at a 2nd grade level by the end of the school year but he said they were barely even reading at a kindergarten level no matter how hard he tried. It would make life alot easier if they made these parents pay for their children to learn English before they send them into public schools. So not everything should be blamed on the staff. They need to look at the children too. Children are not going to do everything you ask them to do, some just don't care because their parents dont care enough. And heaven forbid if you say one wrong thing to a kid. Then you will be disciplined for it even though the kid had it coming to them. Look at the lack of discipline in the homes instead first. Maybe if you had more respectful kids then Maybe the employees in the schools would start caring more.

The answer is something everybody knows to be true but is afraid to say in public - America's educational woes too often reflect the demographic mix of students. Schools today are filled with millions of youngsters, too many of whom struggle with the English language or simply have mediocre intellectual ability. Their lackluster performances are probably impervious to the current reform prescriptions regardless of the remedy's ideological derivation. Making matters worse, retention of students in school is embraced as a philosophy even if it impedes the learning of other students. Most of America's educational woes would vanish if indifferent, troublesome students were permitted to leave when they had absorbed as much as they could learn; they would quickly be replaced by learning-hungry students, including many new immigrants from other countries.

Eventually the the govt needs to step in and say sorry kids your parents don't give a shit about you and are incapable of caring for you so your going off to boot camp to learn remedial skills and social graces.

Not sure if I'm serious or not.

As soon as a school is labeled a Renewal School or any other designation signaling it's in trouble, do you think that bright capable students' parents will want their child in such a school? They would fight tooth and nail to keep their kid out of such a school, and rightly so. First that fiend Bloomberg and now the colossal imbecile DumblASSio have tried to play this game: redesignate a school and you "fix" it. Nope. Doesn't work that way. Renewal schools are full of non-English-speaking students who are also functionally illiterate in their native language, students with severe discipline problems, students who just aren't that bright, students with parents who are apathetic about education, etc. Not a population one could reasonably expect to perform well academically, no matter how much coaching and schmoaching and whatever is done. Yet teachers unfortunate enough to be stuck in such a school are nevertheless held to the same standard as teachers assigned to better schools. It's like being chained to a rock and then tossed into the ocean. So there is a great amount of teacher turnover in Renewal schools, as teachers transfer out in order to save their careers. Classes in these schools are frequently interrupted by disciplinary issues. There is an incredible amount of student absenteeism. Students are not motivated to turn in required work, knowing that the TEACHER is the one who will be blamed and penalized if they fail, so most are undeservingly socially promoted. If they can't do the work in the 3rd grade, what makes you think they will be able to do 4th grade work? Or if they fail most of their classes in the 9th grade, why would you expect them to undergo some miraculous change and pass enough classes in subsequent grades to graduate? They not only have to make up the work they failed, but then deal with the other grades' required work. Have you read about the horrendous attendance rates for summer school? Renewal schools are just a morass of language handicaps (not the school's fault), apathy, violence--you name it--a sticky swamp sucking all life down with them.

Not Bad students - I'd assume they are missing parents who are investing little in their kid's education. Lately I spend an hour after a days work getting home at 7 to help my child with his homework - and he's only in second grade. The importance of education has to start from your home life. I also remember when I was in school in the early 90s kids were separated by performance. For example for a second grade class 2-1 was the best scoring kids, 2-2 was the average, 2-3 were the kids that needed more help and 2-4 was ESL(English second language) now from what I see in schools all kids are in the same class with the administration hoping that the kids who get it will help the kids that don't. I really don't know how this is working out. There are also ESL kids in the standard classes that get pulled out for English lessons, how can that really work if the child truly doesn't understand what's going on in the classroom?

Sanctuary Schools Program does not seem to be working, Mayor Fugazio.

Just lower the standards until results appear to be "improving".

NYC education standard is already so low that a student doesn't even have to show up for class and still get a 50% for anything, and as long he magically attended one class then he gets a 60% (pass). Total joke.

What is so hard to understand? The problem are the type and race of students, not the schools, ask yourself, if you can buy a place, will you buy at Park Avenue or at Mott Haven. This is not racist,it is reality.