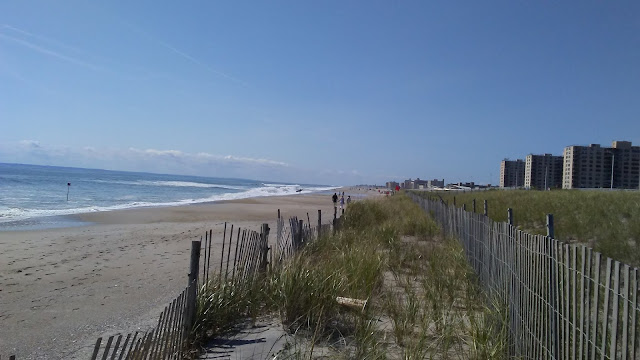 A popular strip of Rockaway Beach that was closed off last summer will reopen in time for beach season this year.

The city will reopen 11 blocks of Rockaway Beach between Beach 91st Street and Beach 102nd Street as part of a $7 million project to clean out the East Rockaway Inlet, U.S. Senator Charles Schumer announced Monday.

"Let there be sand – on Rockaway Beach!" Schumer said in a statement. "Kudos to Mayor de Blasio and the Army Corps for working together in a way that provides a critical positive fix for this situation. No one wanted to have another partial beach shutdown again this summer."

The U.S. Army Corps of Engineers will dredge the inlet and use the sand they gather to replenish parts of Rockaway Beach that had eroded, prompting safety concerns ahead of beach season last year.

"Rockaway Beach defines summer in New York City," said Mayor de Blasio. "Reopening this beach means a lot to this community and families all over the city. We've worked months with the Army Corps and our federal partners on a solution to get it done."

Only 7 million dollars. Yet no new jetties or groins that will actually remediate erosion. This is just an incremental, temporary and cheap fix.
Posted by JQ LLC at 6:23 AM

Can't they get some "Used" sand and save a couple of bucks?

Why waste the money when Rockaway is going to be under 5 feet of water within 12 years if we do not spend 93 trillion dollars on Green New Deal? According to AOC.

Congratulations to Mayor Deblasio and Army Corps of Engineers?

LOL, for what. For figuring out that maintaining sand, on the only ocean facing beaches in New York City, is a good thing?

Wow, it just seems that in today's NYC our government can't even get the basics straight any longer.
The Army Corps of Engineers for all their wisdom, has been "studying" this problem of coastal erosion for decades apparently. It seems they couldn't figure out what to do in Rockaway even though they have more than enough case studies from beaches on long island like Fire Island, Robert Moses state park and Long Beach.
Hummmmm, apparently rock jetties help to maintain sand from being washed away during Nor'easters that frequent the East coast.

So in Rockaway, they pumped millions of cubic yards onto the beach following Sandy at the cost of millions and millions of dollars (not the first time mind you), only to watch the ocean move the sand West over to Breezy Point during the course of 6 years.
Sound of someone slapping their forehead with their palm....."we forgot to order the rocks for jetties in Rockaway!!!"
I guess the town administrators in Long Beach are just smarter, because they got their beaches and their jetties back in order within a year after Sandy.

Meanwhile, back in Palookaville (Queens) we're jumping for joy because the Mayor is gonna spend more millions and millions to put more sand back again...but no jetties until who knows when!

If they could only do something about the sex trafficking and drug dealing on Beach 96th Street, that would be fabulous. Like get rid of them.

See those fenced in sea reeds?
They should be five times more and three times taller to prevent erosion.

This is going to keep happening unless a jetty is built and while they are at it how about a seawall.The dunes they made are no match for the ocean. After Sandy I remember driving from Jones Beach to Captree and the well established dunes with trees and shrubs were all gone.

Now you can focus on getting rid of the crack dealers on Beach 96th Street and while you're at it, get rid of the bums selling nutcrackers - alcohol laced fruit punch and weed on the beach.