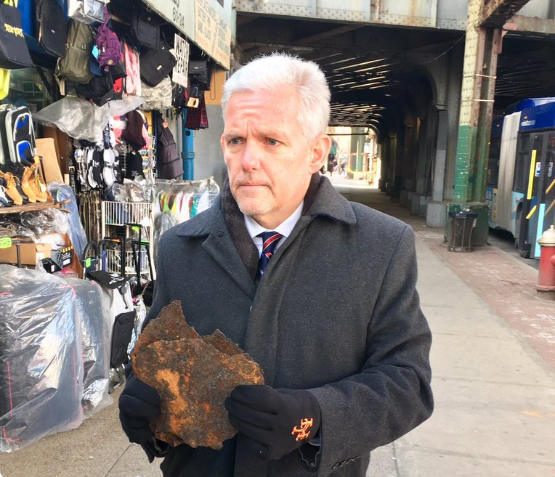 
A piece of debris from the elevated 7-train tracks crashed down onto a vehicle for the second time in two weeks Wednesday, prompting a Queens lawmaker to blast the MTA for the “public safety threat.”

Councilman Jimmy Van Bramer pointed out the incident on Twitter, firing off a photo of the roughly one-pound, 10-inch wide metal piece of debris and a cracked car windshield on Roosevelt Avenue — just blocks away from where a similar incident occurred last month.

“What the hell is going on here?! For the second time in two weeks a piece of debris has come crashing down on a vehicle Below tracks on Roosevelt Ave., this time at 62nd street,” Van Bramer tweeted.

“The car was occupied and moving,” the pol tweeted. “No one injured but someone is going to get killed here @MTA!”


About a dozen MTA workers using a cherry picker were spotted Wednesday afternoon cutting out chunks of rusted metal from the underside of the main stairwell at the entrance to the Woodside/61st St. Station, where local merchant Esmat Elmarakei, 57, the owner of T-Shirts & More on Roosevelt Avenue, said garbage and debris routinely falls from the tracks.

“It hit the back of my husband’s car and broke his back window a few years ago,” Elmarakei said.

Last month wood from the elevated train tracks crashed into the windshield of a black Chevy Tahoe underneath the tracks on Roosevelt Avenue near the Woodside/61st St. Station.

After that incident, MTA officials promised to inspect all of the city’s elevated train tracks.

“We will begin to inspect the rest of the elevated lines that run through Queens, The Bronx, and Brooklyn to…make sure some anomaly like this doesn’t exist anymore,” the MTA’s Chief Safety Office Patrick Warren told reporters.

Debris falling in the same area during a busy weekday afternoon ceases to become an anomaly. The MTA should focus their damage control efforts on clearing out their garbage and improving transit service instead of spinning b.s. to the media.

The only crap in that picture is Jimmy Van Jobkiller

Agreed.
What was that gray haired piece of crap doing on the elevated tracks in the first place.

This isn't going to be fixed by next week-- anywhwere in the city. Avoid driving under Els as best you can. That's all you can do.

Mta just spent a few years doing signal work. How did they miss the rusty steel?

The elevator has been repaired,how they missed the rust?

The stair case landing shakes and rattles,how can they not know?

Very good thing there were no injuries.

Jimmy holding a piece of his political future.

Jimmy is sad because it didn't fall on a Maragos voter. (Maragos ran against Jimmy for City Council in 2009)

I took a bite out of it. That's when I realized it wasn't a chocolate covered matzoh. Is there any bird seed for me to munch on?

He looks a lot older since he blew up the Amazon deal. Just an observation.