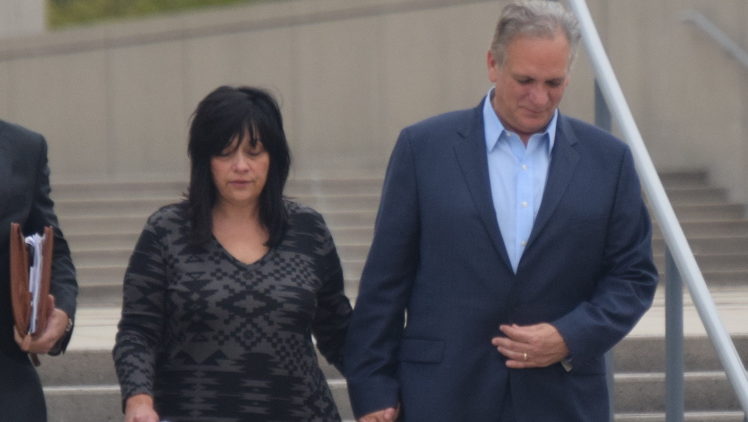 
Former Nassau County Executive Edward Mangano and his wife, Linda, have been found guilty at their seven-week corruption retrial on Long Island — and each now faces as much as 20 years prison.

In a late-morning split verdict Friday, a jury found Mangano guilty of accepting hundreds of thousands of dollars in bribes from ex-restaurant owner Harendra Singh in exchange for the once powerful pol’s help in securing more than $20 million in loans.


Ed was cleared of a single count of extortion. He was also cleared of charges that alleged he swung to Singh a lucrative contract to provide bread and rolls to the county jail, and a second contract to feed the county’s emergency workers after Hurricane Sandy.

But he could still go to prison for two decades under the one top-count conviction.
The same jury found Linda guilty of four of the five counts against her: two for obstructing justice and two for making false statements, all to cover up the bribe scheme. Ed was also convicted of a single obstruction charge.

She, too, faces a potential two-decade prison term.

The two are maintaining their innocence, and said they will appeal the verdicts in the case, which proved an embarrassment for Mayor de Blasio.

At both this trial and last year’s mistrial, Singh testified under a cooperation agreement that he was a big donor and had the mayor at his beck-and-call.

This may be why the co-mayors went to South Carolina this weekend. Bill took a lot more from Singh and he has also anointed his wife with a plum job running the Advance for New York fund and the funding government void THRIVE mental health program.

Singh --Didn't he (or brother) also own that joint atop Corona Park where Estelle Cooper held all her lunches, benefits, fundraisers. Oh and that so called "Fundraiser" for the NYS Pavilion. Benefits, luncheons and dinners where anybody who asked questions (like myself) were forced into the elevator and booted at police gunpoint.

How has di Blasio continued to be Mayor while these two shnooks are facing jail?

I understand that Singh threw parties and galas that were attended by many Long Island judges, including the self-righteous Joy Watson. I guess they were just hungry for a meal.

Whata you want to bet that nobody goes to jail?