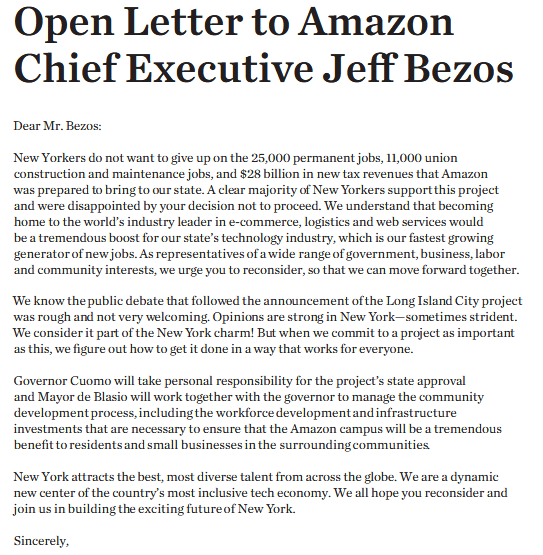 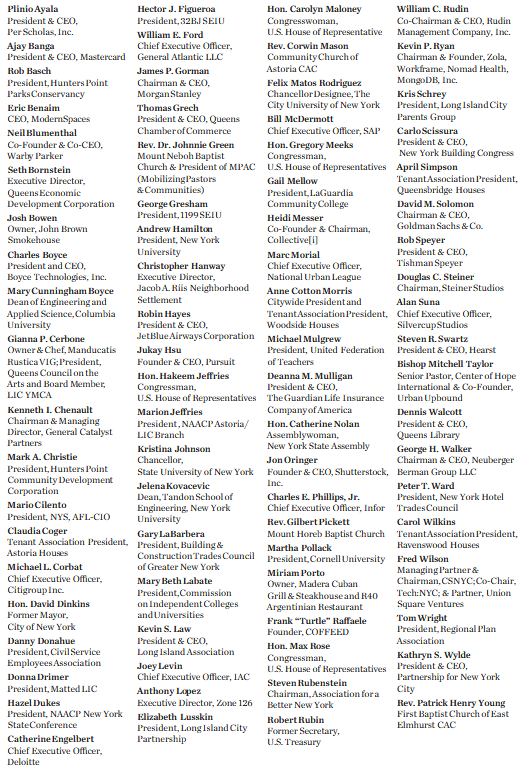 Just pathetic. And all these people actually were willing to put their names and reputations on this.

What, no mention of Gianaris removal from Public Authorities Control Board?

"Come back Mr. Bezos! We got rid of Gianaris! Please baby come back!"

In a stunning offer to get the Amazon deal back on track, Governor Andrew Cuomo joined dozens of business leaders, unions, and elected officials who published an open letter in the New York Times asking the retail giant to give the Big Apple a second chance.

Even though Jeff Bezos and co. may have landed a Valentine’s Day sucker punch, Iron Mike Tyson Cuomo isn’t close to throwing in the towel. He’s launched an all out campaign to woo the company back to Long Island City.

“You punch until you hear the bell, and the bell hasn’t sounded,” the governor said. “Until somebody rings the bell, I’m going to keep pushing.”

“At this point they are irrelevant because there are other ways that the state can get it done, and I told Amazon that,” Cuomo said.

I presume Andrew Amazon told them that in those initial secret meetings and Bezos still abandoned the city and notably the entire HQ2.

Well, well, well. There it is, Queens. The governor doesn't give a shit about the state senator and the city councilman's constituents. Which also happen to be his constituents too. This should show why the subways and highways are the way they are and how they got worse under Mario's arrogant son.

The Governor is delusional! Who the hell is this "Clear Majority" of New Yorker's that supports this?

Q: Where in legal writing is Amazons guarantee of employment for 25,000 New Yorker's?
A: Nothing in writing because its a bullshit shill!!
This is all about Amazon getting into the local real estate, then buying up and monopolizing all the local food stores like King Kullen, Walbaums, Whole foods and every dam thing else. Then sell us the same shit back at a higher cost, including housing.

Yea, Make landlords rich and leave everybody else living in the area with 2 fucking choices
A- Become $3000+ a month renter slaves
B- Move

Not that long ago, liberals hated corporations and the bigger they were the more they hated them.

How many of those people that signed the letter, RISIDE IN or WORK IN Or even pass through the AREA on a regular basis?

"The governor doesn't give a shit about the state senator and the city councilman's constituents."

Lets all share a little secret with you - those local electeds you mentioned feel that way about their own constituents .... or you and the rest of us would not be here.

This pack of Halloween Hitlers masquerading as we the peoples representation us will be back! And more will follow if the get away with ramming this down our throats.

I wasn't sympathizing with Gianaris or Jimmmy. I was pointing out Andy Autocrat's brazen contempt for all citizens of New York.

New York City is on it way to becoming a modern spinoff of Chairman Mao’s Communist China.

Many people like to watch movies or read novels as a way to relax and get away from work and other stresses of day-to-day life. Recently on a shitty days I have been reading about China’s history. It is easily one of the most interesting cultures, with thousands of years of dynasties, warlords, communism, capitalism, wars and atrocities.
And this is what I learned: Mao went to work on taking land away from landowners and giving it to special interest. Done differently, but with the same end goal, New York’s blend of fascism and socialism. All the same shit that’s been decimating renters, small home owners, middle class through regulations, taxes and even armed raids, ending up with large corporations and foreign money owning more and more of the land and commercial property.
Shit whats next?
In Shanghai during Mao’s time, suicide by jumping from tall buildings became so commonplace that residents avoided walking on the pavement near skyscrapers for fear that suicides might land on them.
All of all the same atrocities Mao Zedong’s vision for “The Great Leap Forward.” parallels deBlaios words of “progress” —as in ONLY those in government and those sanctioned by government can prosper.

Isn’t all this very similar (or exact) to what is happening now or is it my imagination ?

That's pretty good. It's the bastardization of the latter to bolster the rise of the former.

I would add it's also those who buy the government too. Which now includes the tech industries that plunder and monetize all our personal information and our habits.

It's hyper-crony socialism and hyper-crony capitalism at work. Hopefully someone will come up with a term or a portmanteau for this.

Where was this letter, and these people, when all the communists were on TV hourly shouting for Amazon to go away? A little too late, aren't we guys?

Because HQ2 was a hoax, and these elites refuse to see it because they were played, as well as the other 50 cities from that year long amazon pageant tour, by a sociopath hundred plus billionaire.

By the way and in my humble opinion, Amazon is communist.