Two busy exits on the Van Wyck expressway will be eliminated in Gov. Cuomo's redesign. 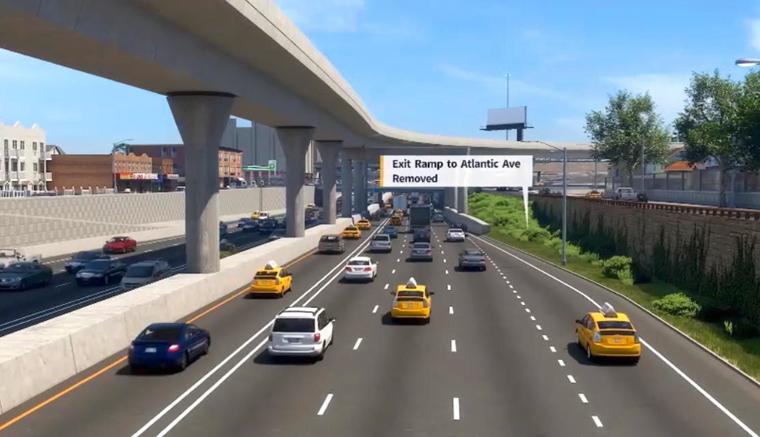 
Buried in a preliminary report on Gov. Cuomo’s plan to rebuild the Van Wyck Expressway is news that two on-off ramps on the chronically congested highway will be permanently closed.

The northbound off ramp at Atlantic Avenue and the southbound entrance ramp at Liberty Avenue have been eliminated in the redesign, according to the state’s latest presentation.

The state Department of Transportation is in the process of finalizing its $1.2 billion plan to add two new high-occupancy vehicle lanes to the Van Wyck to speed up traffic to and from JFK International Airport, which is also undergoing a major renovation.

The new lanes will be constructed down the center of the existing expressway. They will be open only to vehicles with three or more passengers, taxis and buses.

The new lanes will essentially be limited-access express lanes with only limited chances to get off the highway before arriving at the airport going south or the Kew Gardens Interchange heading north.
In a video posted on YouTube about the changes in store for the Van Wyck, the DOT revealed that the two ramps on the Van Wyck will be closed permanently along the notoriously overloaded stretch between Jamaica Avenue and Linden Boulevard.

JFK-bound vehicles may not feel the change, but it promises to be one of the more disconcerting pieces of the project for local drivers.

Under the new design, drivers who get on the highway at Liberty Avenue will have to use the on-ramps at either 101st Avenue or Linden Boulevard instead.

tHIS ACTUALLY MAKES SENSE. THEY NEED TO DO THE SAME ON THE GRAND CENTRAL PARKWAY OR EXPAND IT BY ONE LANE IN BOTH DIRECTIONS.

Cuomo is the state's chief engineer.

Why would they do this? Is their secret plan to make the Van Wyck less crowded by making it less useful?

Why haven't prosecutors closed Governor Cuomo's lane of never-ending corruption, graft and greed by indicting him the way his pals, Sheldon Silver and Dean Skelos (and son, Adam), will soon be heading to federal lockup, I shouldn't wonder?

'Gargoyle Andy' Cuomo has flagrantly abused a lifetime of unearned and undeserved power, privilege and UNJUST ENRICHMENT that was never within his purview (as a purported public servant), to exploit in the first place.

Alas, New York State government is so completely hyper-corrupt, entrenched and establishment-rigged (from the top on down), that the endless trail of monstrously self-serving corruption can be seen from outer space! And, when will We, the People see that slimy swamp creature, Shelly Silver, behind fortified bars of long term lockup? That feckless hustler is STILL awaiting appeal on the OUTSIDE, when men have been hanged for LESS (likewise, Cuomo)!

Too many cars in NYC. What ever happened to building mass transit systems.

I just like the "stupid" tag applied to this post. I hope the next governor adds them back.

Eliminate Coumo at the next election.