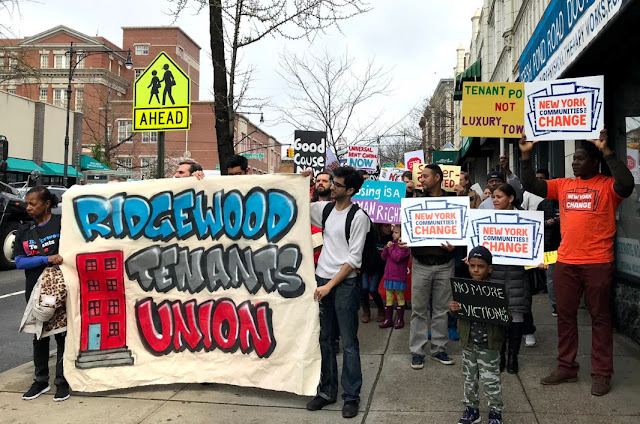 Queens Eagle
Dozens of Ridgewood renters marched through their neighborhood Saturday to denounce a property owner routinely featured on the New York City public advocate’s annual Worst Landlord List. Their chants of “Fight Fight Fight, Housing is Right” prompted nods from passersby, supportive honks from an FDNY fire truck driving along Myrtle Avenue and words of encouragement from local elected officials.
The Ridgewood Tenants Union’s demonstration against Silvershore Properties attracted renters from Ridgewood and neighboring Bushwick who said they have been harassed by landlords who go to extreme measures to evict or wear down their tenants in order to jack up rents, especially in rent-stabilized apartments.
Silvershore’s former owner, Jonathan Cohen, was named the city’s worst landlord in 2017 by former Public Advocate Letitia James. The company owns nearly 100 buildings and continues the conduct that Cohen instituted, tenants say.
Gloria Nieves, a tenant leader at 1708 Summerfield St., described how Silvershore neglected tenants who went without heat or hot water and had to perform their own building maintenance.
“The people who run Silvershore Properties will say that they are good people and that we are the bad guys but to leave an entire building without any heat and oftentimes hot water during some of the coldest days of winter is not something a good person does,” Nieves said. “They have made our lives impossible and that is why we need landlords like them and all the other landlords in our neighborhood to understand that they cannot take advantage of us in this way.”
The demonstration began in front of 61-20 Madison Ave., a Silvershore Properties building, before community members marched down Fresh Pond Road and Myrtle Avenue, the neighborhood’s two bustling commercial strips. The event ended in front of 1708 Summerfield St., where at least one senior tenant watched from her apartment before heading outside to join the rally.
Several tenants told the Eagle about the bad experiences they have had with landlords — abusive companies with large property portfolios as well as opportunistic single building owners — who tried to drive long-term tenants out of their buildings.
Eugenio Vasquez said the owner of his Bushwick apartment building sold the property to a new landlord who immediately raised rent and took him to housing court to try to evict him.
Ahtziri Campos, a 15-year-old volunteer organizer, said her landlord has tried to drive her immigrant family out of the building for five years so that he can raise the rent and attract wealthier tenants amid Ridgewood’s gentrification.
“He only bothered us,” Campos said. “We are the minority in the building and he made us afraid of getting displaced.”
Posted by JQ LLC at 4:33 AM

Housing is not a right. Sorry if that sounds cruel but no one should be forced to provide shelter to another. Not to say this slumlord isn’t an a-hole , but I fear the slippery slope when the word “right” gets tossed around too loosely.

ridgewood union tenants my ass. If not your property, find yourself another place.