Politco journalist gives props to this blog on social media 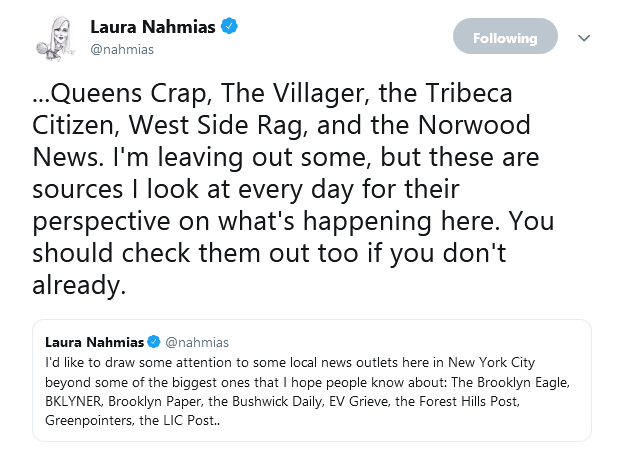 I check your page every day too! Thanks for all you do!

Nice to be appreciated but shes still a journalist, always excited when in the presence of Hillary Clinton, always on WNYC (NYPR), not even from New York City.
WNYC, that stinkin den of rat packing liberals sipping tea down in Tribeca with the likes of DeBlasio, DeNiro and every other Socialist, Marxist, Communist, Pinko, LGBTQ-TG. Include almost every other Columbia University Crackpot with a degree in liberal arts or journalism.

New York Public Radio is independent from the City my ass :(
I suppose this comment will be banned or censored too.

No it won't AQR. Not here

Stay angry. The mayor wants to build a 40 story jail in Queens.

I check here every day, too, but I'd love to know why comments usually take several days to appear when a new story appears. That's something new. I love Queens Crap, it's such a good way to keep up with what's what in Queens and the City. Hey, AQR, I'm with you, buddy.

@ JQ LLC said...
There are many more "AQR" people who will be moving out of this shithole city.
Why stay angry ? If you can make a living and move go live in a place where the policticians work for the voters. We the Sheeple are doomed in this City !

"No it won't AQR. Not here" Sorry but that's Bull Shite !!!
You are in a Echo Chamber QC ! Google can end this blog anytime they choose to !
Accounts on the Internet are being ban by Muti National Companies every day !
Liberals don't have a problem with this ?
The suppression of YouTubers,Twitter accounts, books, films, news, etc. that's a real threat to our Freedom !

Your comment and AQR are here so I'm not doing it. I am 100 against censorship. Even with comments I don't agree with.

No argument here about jetting. But like Howard Beale said, you got to get mad.

Hey in defense of JQ LLC, it's a dirty job, someone's got to do it. Am assuming JQ LLC has to go make money once in a while and sleep. What does JQ LLC stand for? Crappy, Jr?

"Politco journalist gives props to this blog on social media"

Why suddenly now? Hasn't Laura been around and aware near 10 years ?
Why does she only post photos with democrat politicians and socialists or god forbid a guest like Ted Nugent, a Conservative, a Constitutionalist or NRA president ?
The Mayor or one of "the pack" are likely trying to end this blog right now. Google just needs a reason. I cant speak for JQ LLC but I personally would never never trust the intent of any journalist involved with the very same people who ruined our city, especially one educated by the same liberals that brainwashed our kids. The very same people who fund WNYC (aka NYPR) and NYCTV

This mess in New York and Queens is what leftist and Democrat policies gets you. I say it like New Yorker without no NYU or Columbia University degree:
**This is all a warning that leftist policies are garbage just like the condition of LA & San Fran. Two massive shitholes where people crap in the street, illegals & homeless camps at all the beaches, crap, piss, needles, diapers in the sand. A massive oozing sore so bad they steal your front gates and pry the steel bars off your windows for $2 bux scrap metal.

I wasn't aware of how long Laura has been around nor who she prefers to mingle with. My response to her is nothing more than gratitude for the acknowledgement and being compared with other well-known local sites.

I did criticize Laura for including EV Grieve, a blog I contributed comments to for a year until I criticized Michelle Obama when she show up at a girls club in the East Village. It wasn't even vulgar and the mod wouldn't publish my comments after that. So fuck 'em.

The Q is for Queens, the J is for J, and the LLC is a mockery of all the conglomerates that are taking over properties and signifies that I am corporation as well as a person.

About our Google overlords, I understand where you are coming from but the crapper is still here for now. I don't think this is on their radar like zerohedge or telesur, but I think they understand this is still America and not China.

JC LLC, excuse me but isn't The Crapper capitalized?

That photo is taken in front of the lovely old church that had a mysterious fire on New Year's Eve of 2008? or 2007. Still not renovated. These churches always have fires at night. The building awning across the street used to be Shah grocery, now it's a 99 cent store and the building was co-oped.

Maybe someone can go into the Station Bar with a hidden camera like Help Me Howard. Although the MTA drivers might claim they are simply using the bathroom. You got to catch them at the bar with the beer in their hand. Can't the bus drivers use the employee bathroom in the LIRR station across the street?

61st Street, while safe at night and early morning hours is turning more dreadful, dirty and littered as the years go by. I agree with the poster that it's a dangerous intersection.

NPR stinks. I got sick of hearing how awful and dreadful all white people are and how they all should be eliminated by any means possible as soon as possible to make way for the money hungry refugees. Pure propaganda machine.

Thanks for everything you do JQ LLC - so happy you're an LLC :)

I don't get paid for this so it's definitely not capitalized. I would sure as hell like to though.

NPR hasn't been that good lately, but I don't see the anti-white slant you allege.