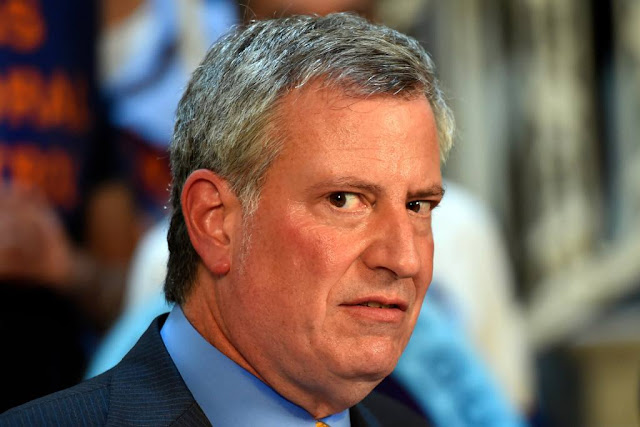 A new ethical firestorm is engulfing Mayor de Blasio as questions are being raised about where he’s getting all the money to fund his cross-country presidential campaign trips.

It’s deja vu all over again for “On The Road Bill,” the mail-it-in mayor of New York City who has been galloping all over the country to test the presidential waters with a suspicious campaign cash box that’s raising lots of eyebrows.

“To me, that’s a real no-no,” Betsy Gotbaum of the Citizens Union said.

Gotbaum is questioning how de Blasio is raising money for his “Fairness PAC” – the political action committee that is allowing the mayor to dream about running the country.

“Is it the appearance of something wrong?” CBS2’s Marcia Kramer asked the government watchdog’s executive.

“I think it is something wrong. I think you do not take money from people who are doing business with or who want to do business with the city. I’m shocked,” Gotbaum replied.

The mayor, who has already been the subject of an investigation into an earlier political action committee, is now being asked to explain two new issues.

One is a fundraiser held in Boston on Friday by John Fish of Suffolk Construction.

The company is apparently so keen to expand into New York City that it hired disgraced former NYCHA chair Shola Olatoye, who de Blasio shockingly kept praising even after she was forced out in the agency’s lead paint scandal.


City Comptroller Scott Stringer subpoenaed the records because the buildings were first appraised at just $50 million – less than a third of the deal’s final price tag.

“When I feel that things are being done in secret, that we don’t get the data, when you have a huge purchase of $173 million… we use the power of subpoena to get the documents,” Stringer explained.

This time, instead of obfuscating his spirit of the law breaking, this dumbass and his greedy benefactors are doing all this in plain sight.
Posted by JQ LLC at 10:42 AM

Rolling-on-the-floor-laughing-my-ass-off [I just had to spell it out.]:

Also, this dick wad is committing the same offenses that got him subpoenaed by the southern district attorney general the first time.

This Podolsky gifting reeks worse than the Rivington House scandal too.

Don't laugh, be afraid, be very afraid.It could happen, it depends on how he's perceived by the rest of the nations democrats. For the most part he gets good press outside NYC.

Only in the Washington Post, that paper publicized de Blasio's bullshit health care program before the local papers go to it.

As for outside positive coverage, highly unlikely.

Let the Boy run- Let him spend spend spend his Ill gotten money - a couple of people will have jobs for a while - they‘ll catch up on their bills, buy some new shoes and put some thing else on their resume
Politicians may be cheap but politics is not- money makes the machinery run.
The rest of the country doesn’t know who Deblahblah is
Look at the mess wifey made of the mental health program- Shame on her for stealing that money