Mayor de Blasio, the man who gave us Vision Zero, was a passenger in a car crash that was caused by his NYPD security team and covered up by their commanding officer 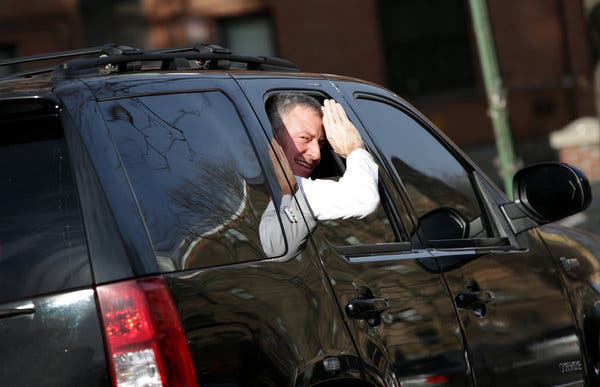 On a Saturday morning in August 2015, Mayor de Blasio was in the back seat of a black NYPD Chevy Tahoe bound for an event in Harlem when a driver changing lanes slammed into his ride.
No one was hurt, but the commanding officer of the mayor’s executive protection unit, Howard Redmond, was furious. Text messages obtained by the Daily News show he immediately ordered the incident be covered up to protect de Blasio’s image.


“As per CO [the commanding officer] no one is to know about this,” Sgt. Jerry Ioveno texted members of the unit, referring to Redmond. “Not even the other teams.”


Text messages obtained by The News reveal that Redmond frantically covered up the Aug. 22, 2015, car crash due to concerns about “optics.” The previously unreported crash offers insight into the powerful commanding officer’s critical role covering up embarrassing episodes involving the mayor. It also hints at why Redmond remains in his post despite turmoil in the unit. The News has previously reported on allegations that Redmond covered up the case of an executive protection unit lieutenant accused of roughing up a sergeant at Gracie Mansion.


No report on the crash is publicly available in state Department of Motor Vehicles records. Redmond allegedly ordered that the cop behind the wheel, Detective Edgar Robles, be officially listed as the driver of a backup SUV, text messages show. That way, the unit could more plausibly claim the mayor wasn’t in the vehicle involved in the collision, a source close to the executive protection unit said.


The crash was covered up in part because of de Blasio’s Vision Zero initiative, which seeks to reduce pedestrian and traffic deaths through stricter enforcement, according to multiple sources close to the executive protection unit. The Vision Zero site proclaims: “The City of New York must no longer regard traffic crashes as mere ‘accidents,’ but rather as preventable incidents that can be systematically addressed.”


State law requires all occupants of vehicles involved in accidents to stay at the scene. But a retired member of the executive protection unit said it wasn’t unusual for a VIP under the unit’s protection to be taken away as long as there was no serious injury.

“Everything about how an accident is handled is the responsibility of the NYPD. I don’t know enough about their protocols. That’s something to ask them,” de Blasio said.

The aloof mayor was also uninterested in the apparent cover-up of the collision. Texts showed EPU members telling each other “no one is to know.”


“I don’t accept the notion that anything was done one way or another because I’m not familiar with what was done," de Blasio said, apparently ignorant of The News’s front page story and coverage it received from other news outlets.

Mayor Fugazio pulled the Sgt Schultz routine. "I know nothing, NOTHING!"

Wasn't one of his campaign promises Transparency in Government?

Hmmm.... covering up an accident? Isn't it a crime? Vision Zero? Of course, DeBozo the clown has no vision.

Leaving the scene of an accident is also a crime.

I bet the cause of this crash occurred because Mayor Big Slow was late to an event and his diva ass ordered his driver to step on it. Which is probably what also happened with co-mayor Chirlie's crash too.

Isn't it funny this incident provoked Billy Blob Villain to run against Biden?

Stupid suck ass detectives. Why do these politicians have detectives drive them? Can't a cop do it,can't they take an Uber or a yellow cab. I forgot,they're better than us.