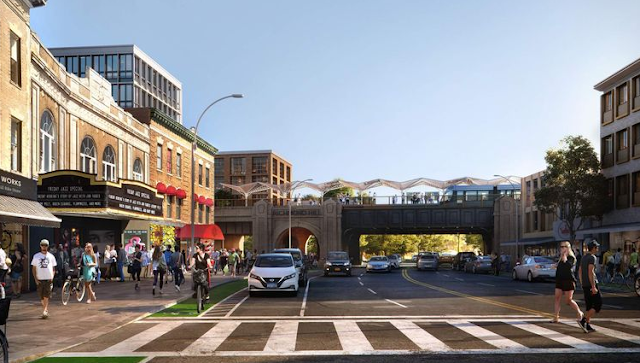 NY Daily News
A little-used stretch of train tracks in Queens could be the key to filling transit deserts in the borough, community leaders say.

The Long Island Railroad’s Lower Montauk branch, which runs 8.5 miles between Long Island City and Jamaica, could be used to bring new passenger rail service to communities like Maspeth and Glendale, which do not have subway stops.


The LIRR ran commuter trains along the line until 1998, when the Metropolitan Transportation Authority closed its stops due in part to low ridership. Now, the tracks service freight trains and are used as an extra storage space for Sunnyside Yard.


The chief advocate of the project, dubbed the QNS, is former Councilwoman Elizabeth Crowley (D-Queens). She commissioned an independent feasibility study in 2017, which was completed shortly after she left office in early 2018.


Crowley has recently renewed her push for the line — she hosted an event Friday to begin assembling a non-profit to stump for the project.

Her proposal would bring nine stops to the stretch, and would cost an estimated $2.2 billion to pull off. The 2018 study projects that it would serve roughly 21,000 weekday riders.

Community leaders and advocates of the project disagree with that assessment, noting that the areas it will serve expect to boom in the coming years.


“Look at the growth in Long Island City and the growth in the Jamaica downtown area and at JFK Airport,” said longtime transportation consultant Philippa Karteron, an advocate of the project. “If we could put something like this together, the corridor could be an economic development corridor, bringing in businesses, bringing in jobs.”


Unlike the BQX, another Queens-oriented transit project, Crowley’s idea isn’t supported by real estate developers — she says she’s working to form a grassroots campaign that has community boards involved from the get-go.

This actually isn't a bad idea considering the severe and desperate need for transit in this overcrowded and overburdened city but that rendering of Hillside Ave. in Richmond Hill is a hysterically inaccurate depiction of the citizenry in that area. And very racist in it's prescience of what the designers think it will look like if the station is built there.

It makes no sense
The line has no track-tunnel connection to Penn Station. Who in a decent state of mind is willing to ride only to get off and switch to the filthy overcrowded 7 train.

The woman proposing this is deranged

Jeezus will this oxygen thief EVER leave us alone?

Former NYC Councilmember Elizabeth Crowley's idea to restore transit service on the old Long Island Rail Road Lower Montauk branch via light rail for $2.2 billion is nothing new.
MTA NYC Transit in 1983 conducted a Queens Subway Options feasibility study for potential conversion of this LIRR branch to a subway on the ground. Intense community opposition killed the project before it progressed beyond a planning study. The same will be true once again as community opposition still exists for restoration of any active passenger service.
No neighborhood will want to host a maintenance, operations and storage yard. Queens elected officials, transit riders and transit advocacy groups all have their own transportation priority projects which are cheaper, more cost effective, move more people and are a higher priority. The MTA will not be providing any funding under the upcoming 2020-2024 capital program. Same is true for the next 2020- 2021 city budget.

(Larry Penner is a transportation historian and advocate who previously worked 31 years for the US Department of Transportation Federal Transit Administration Region 2. This included the development, review, approval and oversight for grants supporting billions in capital projects and programs on behalf of the MTA, NYC Transit, Long Island Rail Road, Metro North Rail Road, MTA Bus, New Jersey Transit, NYC Department of Transportation and over thirty other transit operators in New York State)..

That would be a good thing, and can we also bring back the LIRR Rockaway branch before we lose it forever if they turn it into a Queens version of the High-Line?

Hillside ave in Richmond Hill once looked like that when it had better stock of citizenry.

I've walked the track a few times. The west half of that span is pretty much all industrial, even a great deal of the eastern part as well. But .... it'd be cool to get places like Maspeth and Middle Village some train traffic, wouldn't it? The station and platforms in Richmond Hill (a second LIRR for Kew Gardens!) are already there. Pretty much all that is needed is to open up the gates, then import all the people in that picture. Has anyone asked the residents if they want this?

Who are they kidding? I'm going to call foul on the Daily News' mention that real-estate developers aren't interested, and that it's grass-roots only. Besides the greedy thoughts of populating Blissville and Laurel Hill with condos (hah, great river views of Newtown Creek), how is this entire project not a grab for a massive Queens-to-Manhattan hub just for the people in new high-priced development in Queens Plaza and those huge condos thrown up over the last 5 years? Look at that map on DN's site. Those lines don't meet in LIC and go to Manhattan like that. Yet.

I am not sure what you mean by racist. I live in Richmond Hill (not a newbie) and that looks like the nice mix of culture we have here.

This looks pretty good tbh. A real reason to vote for a Crowley.
Let's see what Costa and Richards pitch as their big plan.

Too expensive for the limited area it will serve. Where will the stations be? Will the city use eminent domain to take land/property to put the stations in. Will they hire more cops to patrol this new line? Where will they put the storage yard and mechanical shop to repair / maintain?
I’ll take a piece of pie in the sky with my coffee...

Feels like every year we hear calls for reopening the LIRR's Lower Montauk Branch or Port Washington Queens branches (Elmhurst, Maspeth, Middle Village, etc.)...some of these stations were open only 20 years back. It's wasteful and useless to leave them fallow. I'll believe it when I see it...

Note also that there are no elderly or middle aged people in that rendering too. So it's also ageist

There was a reason to close that line in the first place - no people were using the train. Nothing's changed since 1998 to call this a good idea.

Didn't someone propose this back in 2015?? There was some debate over making a Queens High Line-style park or restoring train tracks for mass transit use. I'm all in favor for more transit. We in Queens need it so badly. Especially in areas where you need to take a bus just to get to a train to go into Manhattan. Also, more transit that gets you from point a to point b in Queens would be great too - it's hard to rely just on the buses.

Also, thank you for calling out racism, especially on the part of developers.