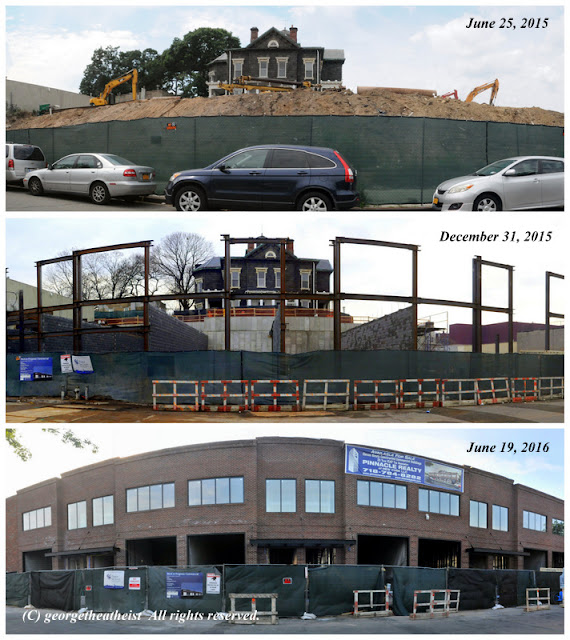 Photos from George the Atheist 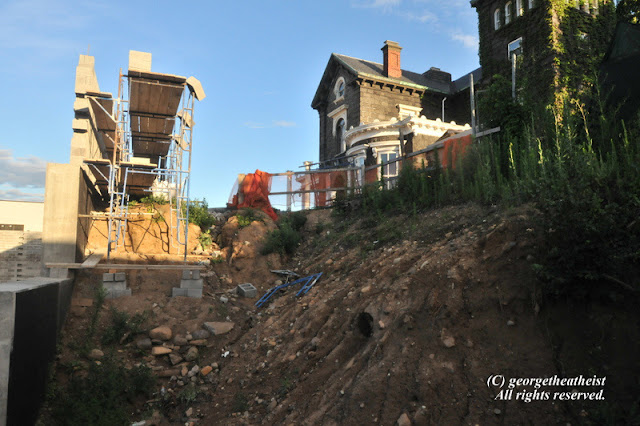 Posted by Queens Crapper at 6:46 AM

The future occupants have the ability to walk about unclothed, regardless of the existence or condition of any window treatments.

However, it does remove much of the thrill and excitement...

Folks, why have a landmark when you can't even see it?

Crapper's post shows the 42nd Street side of the Mansion. Completely obliterated from view.

Now the remaining main entrance facade, the more photogenic side of the Mansion - on 41st Street - is currently being hidden from view with ongoing masonry work.

Check that out HERE.

Folks, in 7-10 days, just the chimneys and tower will be visible from the 41st Street side. Get the kids and bring your cameras. Bye-bye the Steinway Mansion. This historic and most beautiful building of Queens.


I have many years of architectural studies and experience in two countries and this is one of the biggest architectural "sins" I have ever had the distaste to see.

Even if you serve your client, the public and the environment comes first.

This architect totally lacks common sense, taste and professional and personal ethics. He or she should be banned from practice.

This is your shameful Queens.

A Land of Aesthetic Ignorance and Ignominy.

Alas, I feel wounded by the arrogance and political worthlessness that has completely obliterated the entire borough of Queens County. Greed has always been an incurable illness--and, now it has entrenched the establishment-rigged system so completely, that it DEVALUES all honesty, ethics and integrity itself!

watch out for the next tragic occurrence it will probably be a fire where the whole house gets torched and of course it will have full insurance coverage.Whats the use of having a landmark when no one can see it wheres the rational to that.

This is the poster star of Queens Crap. So many old and important Queens houses and buildings are torn down in Queens without regard to the cultural loss. The Landmarks Commission values only the architectural legacy of Manhattan and Brooklyn. When it comes to Queens they say "where".

At least they could have made it less hideously ugly?

On the 41st street view: the Mansion's characteristic columns and the rotunda are no longer visible.

You can thank the "architect"for this: GERALD CALIENDO.

Believe it or not, Caliendo is on the Land Use & Zoning Committee of Coummunity Board 1 - the CB of the Steinway Mansion. AND Caliendo is the Chairman of the Board of Directors of the historic King Manor in Jamaica.

You would think he would know better. Alas , he is "Queens" through and through - schooled and domiciled in this shameful borough.

Do something people instead of hand ringing and bitching. Look at the joke that Childs Restaurant will be going through, look at St James, Neirs, Richmond Hill etc etc etc.

Time to get angry and DO SOMETHING instead of just wringing your hands like a bunch if ninnies.

You get Paulson and Durst in there and those warehouses are toast!

"We welcome you to come see what our firm can do for you."

This is quite the disgrace, and the way this was done might be unprecedented but was surely evil.

Really, talk about creative thinking. If you can't demolish it, hide it in a box. The people with power, money, and influence can safely assume they will not be stopped, especially in light of Mayor Teflon Big Slow's recent slap on the wrist from the CFB, of which he appointed half his members.

If anyone knows, or cares anymore, Neir's in Woodhaven was recently denied landmark status by the wretched refuse of unelected saps at the LPC. So when the gentrification industrial complex comes to their town via the East New York genesis project, they won't need to surround it with hideous warehouse studios.

the summer of hate continues.

http://www.pinnaclereny.com/about All about Pinnacle Realty!!

Did any of you really believe this would end well? You are powerless among your crooked politicians who get their cash from the NYC real estate industry. Dump ALL incumbents...THEN....be sure to research well who your next elected representative will be WELL BEFORE Election Day. DAMN...... most people scope their next computer purchase better than they would their future council member.
Get wise...INVESTIGATE WHERE YOUR REBNY BUTT BOY GETS HIS MONEY,

Ironic indeed, George....an EXTERIOR landmark obliterated from view.
Blame the Vallones...those shifty, shady career politicians, for this shameful disrespect. A turd has been dropped in YOUR district!
Now go and wipe the asses of the ones responsible for this.

Its time the people in Queens start to rise up!

Sure you can blame the mayor but this is a result of a toxic mix of Queens Party Machine politics that take away our government and neuter our democratic process, as well as the people that have lived under it so long they have forgotten what its like to be real Americans where only a fool would f*k around with.

As explained by Councilman Costa, the "members of the community" who are "not doing anything indecent but doing the right thing" have given us the 41 St and the 42 St views of the Mansion ... which should earn his friends a fat return ... and for the community ... a piano shaped fountain.

Dear reader: For your estimable consideration:

A Tale Of Two Cities. The Parthenon vs. The Steinway Mansion. Athens vs. Astoria.

This is a black eye to the borough.

Costa wrote recently: "Our neighborhood has a rich cultural and historical heritage that we must strive to respect and preserve. That heritage can be seen in major institutions like the Steinway Piano Factory."

What a horse's ass. no pride in his community and no respect for hits people.

Costa is a also a pathological liar with a perverted menacing grin.

THE VALLONES ARE BEHIND THIS - WHEN THE OLD MAN GOES WE CAN BEGIN TO BREATH.

The people of Queens will NEVER rise up. They aren't people. They are sheep. "Baaaah....baaaah....baaaah!"
Follow the leading of your crooked shepherd politicians. Maybe the mansion should be moved to another location. Groan!

When old man Vallone croaks...you will still have his two sons.
So the crooked dynasty still reigns supreme.
Politics is their family business since the days of Charlie "the judge" Vallone.

Maybe a flash flood will wash the mansion down hill and demolish the crap!

Time to stop crying in your beer. The..LOL....landmark building still stands.
Have you read "TheSecret Garden"?
Now we have a secret landmark. LMAO!
Get over it , Queensites, your borough is a joke.
Underdeveloped...it will CONTINUE to be the victim of "progress" ...overdevelopment.
What do we have but underutilized land to offer, compared with the more cultured, architecturally rich boroughs of NYC?
So...there you have it.
All of the king's horses, and all of the king's men...AND...all of Quues' anemic historical societies will have little impact on preserving our bereft borough's history. Developer money talks and politicians walk away with their campaign contributions!