This isn't a conflict of interest or anything... 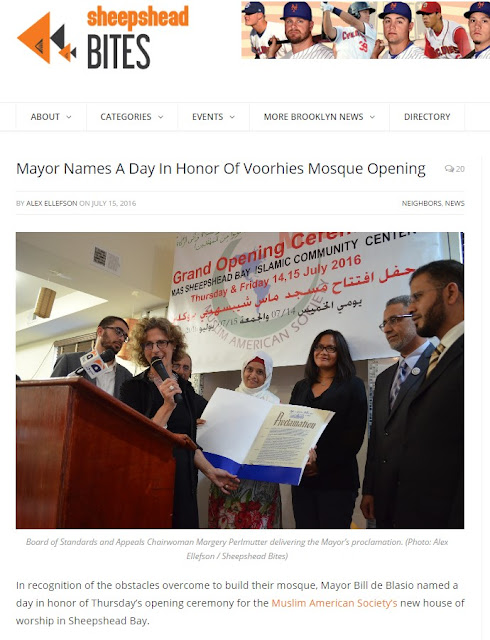 Margery Perlmutter, Chair of the Board of Standards and Appeals, which decided in favor of an oversized mosque that a Brooklyn community opposed, not only attended the grand opening of said mosque, but presented a proclamation to the congregation on behalf of the de Blasio administration.

With a track record like this, it seems the deck is stacked against those opposed to an oversized mosque in Flushing.
Posted by Queens Crapper at 12:45 AM

Bunch of criminals set out to destroy neighborhoods and quality of life.

This will be a nightmare for the towns residents, as it is for other areas that have baptist, catholic and protestant churches and synagogues. People will drive there regardless, will act obnoxiously entitled and cops will be helpless again because writing tickets will encroach on their religious beliefs.

Good...she does her part to support a potential terrorist center.

Perhaps he figured out that if it were not approved, that "heads might roll"...

Well I'm sure DiBlasio would call 9/11 a Muslim day of honor also.

To be fair, Orthodox Jews usually walk to synagogue.