If you see something, say something 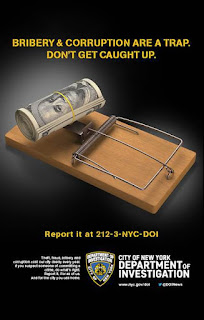 In case New York City’s employees need a refresher—and it seems like many might—the Department of Investigation would like to remind them: bribery and corruption are illegal.

As the city grapples with several ethics scandals, The Department of Investigation would like to remind city employees that bribery and corruption are illegal. corruption-fighting agency is rolling out a Just-Say-No style aimed for the world of waste, fraud and corruption: plastering the sides of city buses and the radio airwaves with advertisements reminding people not to get sucked into the seemingly ever-present temptation of graft.

The campaign began this weekend with ads on the sides of city buses showing money in a mousetrap proclaiming: “Bribery & Corruption Are a Trap. Don’t Get Caught Up. Report It.” (The mouse trap is a bit of an interesting choice, given that people who report crimes are often referred to as “rats.”)
Posted by Queens Crapper at 6:55 AM

Can we park one of those buses in front of DeBlasio's house?

Are you kidding DOI?

Morality should be taught in the home and schools, not on the side of busses. The message is 'bribery and corruption are wrong' instead of 'you might get caught'.

Quite telling how this city is in the toilet thanks to its corrupt politicians and agencies.

What propaganda lies and bullshit this is!

Now, I've been 'SEEING SOMETHING AND SAYING SOMETHING' for decades (with solid evidence, no less!), as the intensely incompetent idiots at the DOI continue suspend all cognitive function at will! Even the DOI'S own Inispector General, Andrew Brunsden (who along with missing-in-action Commissioner Mark Peters), has his head burrowed deep up his ass!

Likewise, the always crooked-and-corrupt MTA Inspector General's Office. Both agencies (as well as even more worthless crud like the 'Affirmative Action' hire Letitia James [Public Advocate Joke of the Century!]), and the other derelict, polictical hack, Scott Stringer, both give mendacity a bad name!

And, all of these unfunny clowns are under the 'BIG TOP TENT' of the most disgraceful, dishonest, dishonorable and disloyal mayor of them all---BILL de BLASIO! And, because these public fools continue to ignore corruption, graft and greed (the same greed that empowers and enables themselves at the expense of the many), is why lawlessness, vigilantism and societal breakdown are forever rising.

There IS no quality of life in NYC---it's DOA!

Any cop or firefighter who accepts a free cup of coffee should lose their job,all I can say is if corruption and bribes are what you want god dammit RUN FOR MAYOR then it's LEAGAL AND WE WILL EXPECT IT,GOT IT.

make sure that a copy is sent to ny politicians,U.S,Nys,Nyc.is it possible to make them take LIE DETECTOR TESTS?How about former U.S.gov.officials who are running for the U.S.Presidency?LIARS ALL.

We have been saying, and reporting, this for years with no results.
Check out CB7's Chuck Apelian!
Follow the Buck Chuck is your key to opening up,a well of community board corruption!
RU listening, Preet?