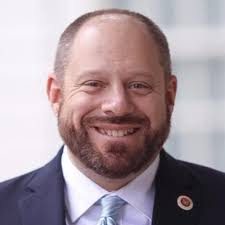 A Queens City Councilman is slapping Mayor de Blasio with a lawsuit charging that he was illegally shut out of a conservancy formed for Flushing Meadows-Corona Park.

Councilman Rory Lancman says de Blasio barred him from choosing a board member because he’s not a political pal — and broke city law that requires such conservancies to have a rep for each Council district that covers part of the park.

The United States Tennis Association, in a deal to win approval for the expansion of its tennis center in the park, is contributing $350,000 a year for the next three years, and then $200,000 annually for 20 years after that for the conservancy.

De Blasio announced the new conservancy for the 900-acre park in November — but only Julissa Ferreras-Copeland, a mayoral ally, got to fill a seat on the board.
Posted by Queens Crapper at 6:47 AM

I think that Koo and Koslowitz also represent part of the Park.

Councilman Rory Lancman is very angry that he is being cut out of the $200,000 each year.

It is always about the money.

So we have another UNELECTED, UNACCOUNTABLE board making decisions about a public park, that is the rightful property of "We the People"...

"Governments are instituted among Men, deriving their just powers from the consent of the governed, --That whenever any Form of Government becomes destructive of these ends, it is the Right of the People to alter or to abolish it, and to institute new Government,..."
From the Declaration of Independence for those of you who went through the public education system...

Maybe the beard has made Rory a little more feisty...

Lancman is right, he was cut out.

Maybe the beard, Anonymous, is a cover for deeper corruption, greed and graft from this obviously self serving politician (not public servant!)!

Lame Lanceman is just like all of the rest in the city council's taxpayer funded, playpen of privilege, all of whom have never been weened off the public teet (after repeatedly failing to serve their constituents and community---and, now with a 32% pay bump that wasn't publicly authorized, to boot---AGAIN!)!

Lancemen is in the 'womb-to-tomb' system for life---compliments of the public fools who keep 'birthing their own monsters!'

IT'S NEVER ABOUT REPRESENTING THE GENUINE INTERESTS OF THEIR CONSTITUENTS, BUT RATHER THE GREEN THAT CAN FILL A POLITICIAN'S POCKETS!

You should see this impostor when he shows up for Queens borough board meetings---between Czarina Melinda Katz, Ambassador Karen Koslowitz and himself, they represent a private, exclusionary Jewish country club, where everyone is 'ALL IN' around the massive conference table of political worthlessness---except their constituents---forgotten by time, greed and arrogance!

Admittedly I don't know much about this particular story, but I am in favor of anyone suing DeBlaz. The guy has a history of corruption and filling seats with his favorites along with going against community board votes and just doing whatever he wants. He's got to go!

>You should see this impostor when he shows up for Queens borough board meetings---between Czarina Melinda Katz, Ambassador Karen Koslowitz and himself, they represent a private, exclusionary Jewish country club, where everyone is 'ALL IN' around the massive conference table of political worthlessness---except their constituents---forgotten by time, greed and arrogance!

Nice try Julissa, but you're not going to distract us from your little mafia-like arrangement with the Mayor.

"De Blasio announced the new conservancy for the 900-acre park in November — but only Julissa Ferreras-Copeland, a mayoral ally, got to fill a seat on the board".

SO FAR JULISSA HAS NOTHING TO SHOW AFTER HER APPOINTMENT TO THE CONSERVANCY. THE PARK IS FILTHY. THERE'S GARBAGE EVERYWHERE. THE BATHROOMS ARE UNMAINTAINED AND BENCHES ARE OLD AND OUTDATED. THE BIGGEST PROBLEM IS THE LACK OF SECURITY.

I called Councilman Rory Lancman's office recently, seeking help in finding one of the City's smoke/carbon monoxide detector giveaway event sites. I was not able attend any of the dates or locations I saw on a posted calendar due to a bunch of conflicting medical appointments and an injury. Following the instructions on the calendar "If you can't attend on any of these dates", I contacted the Red Cross, a co-sponsor of the event, but couldn't get hold of anyone at all there. I spent over an hour trying to contact someone in the FDNY, who was the other co-sponsor of the events, trying to find a date and time I could make it. Finally got someone there who told me to contact Councilman Rory Lancman. The young staffer in Councilman Lancman's office told me to pull my car up to the curb outside the office at a certain time in the afternoon. I did just that, and a young man placed a small box containing a smoke detector into my hands! Seems one of the staffers who had attended one of the giveaway events received a call to please bring one of the smoke detectors to the office on my behalf, since I could not make it. That is unbelievable, but it happened.

To Anonymous: Julissa Ferreras didn't write the piece from which you quoted me above---I did. No, I am not a politician, much less a sleazy one. I am merely a 'constituent-peasant' observer to the farce that passes for good, resonsive government at 'Melinda's big, wobbly table of sycophants, traitors and self serving parasites (better known as the city council and all worthless, immobilized-and-paralyzed district managers), all of whom nullify why there is a borough board meeting (where all are invited to attend) in the first place.

And, if THIS is any representation of what democracy looks like in modern day society, then we're doing it wrong!

Ok, you get a pass for that phrase alone.