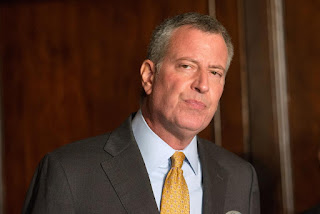 From the NY Posts:

Mayor de Blasio’s largest bundler this year reported raising $68,750 from 16 donors — but one says he has no idea how his name got on the list, another couldn’t recall the contribution and a third refused to discuss it.

The donations were rounded up by Arana Hankin, a senior vice president at WeWork, an office-space-sharing company that has been lobbying the city on a project in the Financial District.

The $68,750 rounded up by Hankin is the largest bundle received by de Blasio’s 2017 campaign to date.

One of the donors, Shlo­mo Khodara, told The Post he has “no idea” how his name ended up in official rec­ords as giving $4,950 — the maximum allowable under city law.

Meanwhile, the Campaign Finance Board let his non-profit off the hook.
Posted by Queens Crapper at 6:42 AM

There has been alot of emphasis and attention into shady Diblasio and his dealings but what about Cuomo. For the 4th of July he was all the way in Long Island celebrating. He skipped the city to hide away from the media. His people aren't angels and they should all be investigated.

As mentioned in the article:
"...another couldn’t recall the contribution..."

Do you recall that while testifying before congressional investigators as first lady, former Secretary of State Hillary Diane Rodham Clinton, answered “I don’t know” or “I don’t remember” 250 times?

This seems to be the standard answer for those in the Democratic party...

by the pen and keyboard of course not the gun or sword.

Yes Virginia, plausible deniability can let you donate 5 large without your knowledge and can get you in the oval office,

Anybody working in Cuomo's administration is suspect.

Preeeeeeet--YOU MISSED A BIG 'UN! Time to revisit Albany for a second cleansweep--the sooner the better!

Under THIS hyper-corrupt administration, New York State has already been murdered in cold, un-Democratic blood!