Why were these emails kept under wraps for so long? 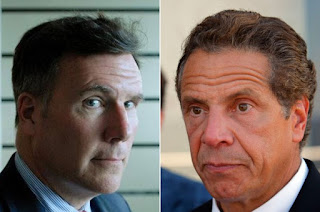 ...in nearly 350 pages of emails obtained by The New York Times as part of a Freedom of Information request, it was clear that Mr. Howe had entree to the top levels of Mr. Cuomo’s administration — a period that included the years and months leading up to the news of the federal investigation.

The Cuomo administration had fought against releasing the emails for two years, spending more than $200,000 to hire outside counsel — Greenberg Traurig, a loyal Cuomo campaign donor — after The Times went to court seeking the documents. A state judge last year ruled against the administration, and ordered that the documents be released; the state appealed the ruling, but subsequently agreed to a settlement that allowed for the emails’ release.

The emails showed how Mr. Howe used his access to gain help for clients.
Posted by Queens Crapper at 6:48 AM

Mario's son must lose this year. This asshole has no reason and no morals or ethics to run the state efficiently.

He is going to win this year. No one is really running against him.

At least we don't have to see him go any higher. I really wonder if he knew camera's were rolling during that speech last week.

I can't wait to get an 'America Was Never Great, Cuomo 2020' hat. Just a nail in the coffin of his future dreams. LOL.

Cuomo will soon go the way of Crowley. His last comment about America not being Great will cause a lot of Democrats to not vote in the primary as the candidates are both the same. Ironically, upsetting upstate gingham & Pickup voters was how Koch lost to Mario.

I also want Cuomo to lose. He is, after all, a LOSER without any trace of moral fiber. Certainly we don't need the nutcase Cynthia Nixon as a governor. What do we know about Molinaro? According to Wiki, Molinaro is the current Dutchess County Executive. Molinaro is a former Member of the New York State Assembly; Member of the Dutchess County Legislature; Mayor of the Village of Tivoli, New York; and Member of the Tivoli Board of Trustees. At least he seems to have some executive experience. Hopefully, he even loves America, unlike the stinking amoral Cuomo.

What more can be said about the man who hates America? If not for the NYTimes the average citizen would be buried under a load of debt trying to exercise theyre rights under the NY Freedom of Information Act. An Act that was really designed to protect corrupt politicians, not the citizens.

You want more proof, possums? A leaked 2005 internal Citigroup memo, the parent company of Citibank, read: ❝The world is divided into two blocs – the Plutonomy and the rest … plutonomies are economies powered by the wealthy.❞

Ajay Kapur, lead author of the report, said powered by the wealthy, but what he REALLY means is EXPLOITED by the wealthy. The memo continued: ❝In a plutonomy, there is no such animal as ‘the U.S. consumer,’ or ‘the UK consumer,’ or indeed the ‘Russian consumer.’ There are rich consumers, few in number, but disproportionate in the gigantic slice of income and consumption that they take. There are the rest, the ‘non-rich,’ the multitudinous many, but only accounting for surprisingly small bites of the national pie.❞

In 2006, 'The Plutonomy Symposium—Rising Tides Lifting Yachts,' another internal memo from Citigroup (see page 155 of 'The Zeitgeist Movement Defined') said: ❝We should worry less about what the average consumer … is going to do, when that consumer is (we think) less relevant to the aggregate data than how the wealthy feel and what they’re doing. This is simply a case of mathematics, not morality.❞

❝The men the American people admire most extravagantly are the greatest liars: the men they detest most violently are those who try to tell them the truth.❞ —H. L. Mencken - (1880-1956) American Journalist, Editor, Essayist.

❝Not a single person who was ever oppressed, has ever made a persuasive appeal for change to be executed by their oppressors.❞ —Desiderius Erasmus

❝No man will ever be free until the last king is strangled by the entrails of the last priest.❞ —Denis Diderot, French philosopher

❝Always beware of the fact, that the only thing hindering an all out revolution is your fear of losing the scraps they throw at you.❞ —Gore Vidal

❝The system cannot be fixes by the system.❞ —Tom Morello

The media are the propaganda tools that fuel corporate fascism.

Just look at the history of the two-party-machine failed duopoly/kleptocracy: Over the course of more than 100 years, power has shifted back and forth between the DemonRats and the Repuglicans.

LAW is about keeping human predatory greed in check. Any law that is not about that, is an expression of the same predatory greed. This defines good law and bad law.

FOR THE CANDIDATES WHO ARE RUNNING TO BECOME PUBLIC SERVANTS OF We, the People:

If elected, will you sign the 'Pledge' to work to:

1. get money out of politics. Yes or no?

2. get rid of gerrymandered districts. Yes or no?

3. make sure our elections cannot be rigged. Yes or no?

6. encourage, reward, and protect whistleblowers who report wrongdoing. Yes or no?

7. transition to 100% renewable clean energy in less than 4 years. Yes or no?

9. enact Single-payer Healthcare. Yes or no?

12. reinstate Net Neutrality? Yes or no?

13. legalize Marijuana? Yes or no?

14. legalize Magic Mushrooms? Yes or no?

but just like Deblasio - what action will be taken against these politicians?
nothing! the New York government is so corrupt -with the amount of money this state generates something needs to be done.

And dont forget that little Andy Cuomo gave us the 2008 Great Recession when he was Clinton's long time HUD Secretary. Village Voice columnist, the late Wayne Barrett, informed us all about this ten years ago HERE.

Geez, #7.
Could you please shown your comment?.
It's a whole epic already.
Submit it to your professor not a blog.

Unfortunately for Cuomo, his presidential aspirations will never come to light because this country will not vote for an Italian American from NY. Just the truth. Look at what happened to Rudy. He got blown out during the GOP primaries. Cuomo has no chance.

Cuomo is the guy the Dems want to run for President? I keep hearing! They must be kidding! Who's gonna be his running mate DeBlasio? Andy didn't even get out of the gate without hitting his empty head and getting a concussion. Don't make me laugh!

He always speaks in a whining condescending tone to the People of NY. Who does he think he is?

To third Anonymous from bottom: Two political scourges like Cuomo and Giuliani will never be elected NOT because of their extraction or ethnic derivations――but, because they are BOTH criminally corrupt, insane and depraved beyond reason and sanity itself!

Stop yourself from pitiful demagoguery and racist theory when there is no evidence to support the latter, whatsoever. To the fourth Anonymous from bottom who said, "Geez,' in response to my well documented comment: Do the world a favor and go back to sleepwalking――you aren't due to awaken from suspended animation until another 50 years of political, apologist sentiment that is against your own self-interest (and that of the nation, and world-at-large)!

Alas, he sounds like a mad, tyrannical dictator whenever he speaks, because that's exactly what he is. And, when I hear his stooge, Kathy Hochul sing the praises of a criminal psychopath like 'Gargoyle Andy,' I become seriously ill with a slow burn to my stomach, because it is THIS willful arrogance and selective memory that angers me the most, since they BOTH devalue honesty itself――to pathologically high treasonous, traitorous and tyrannical effect――and, the ever languishing public be eternally duped, bilked, RAPED, robbed, scammed, SCARRED FOR LIFE, and damned!

Everyone in his crooked cabinet will soon be incarcerated EXCEPT the kingpin himself. Banish this mad, tyrannical dictator to an even smaller cell than his henchmen will soon receive, I say!