It's not just here 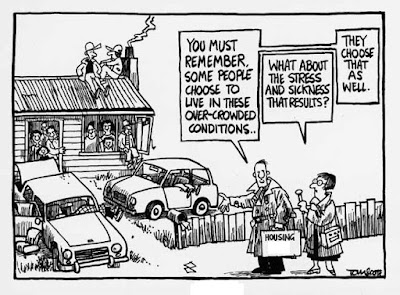 Nearly three dozen people were found living in a single-family home on Long Island in what police called “dangerous and hazardous conditions.”

Officers with the East Hampton Town Police Department served a search warrant at the house shortly after 6 a.m. on Monday, after the town’s Ordinance Enforcement Department issued an investigation into the property.

In all, 32 people were found to be living in the house.

Police said 18 of the inhabitants were found sleeping on mattresses in the basement near the gasoline generator and gasoline storage tank.
Posted by Queens Crapper at 10:06 AM

That comic is unironically correct. How else will you find $400 a month rents?

Gotta be third worlders. It's just gotta be

1%'ers need their yards landscaped. Find out what businesses hired these people living there and shut them down and fine them to oblivion.
Harrumph!

It's actually seasonal employees at the bars and restaurants in the Hamptons.

The whole town is infested with this, and in Springs where all the restaurant slaves live its the worst shithole on the Island !!!!!
Montauk around the lake where the Irish summer help live 10 to a room in bunk beds,
Filthy unmatched Bed-sheets and tin foil on windows, mountains of garbage bags and bicycles trash, vomit and fights everywhere.

"I blame white people"
When referring to Montauk he's right, its the Montauk Irish that own most the bars, restaurants, Nicks, old Cheapskate Artie at Memory Motel that caused the mess. They also turn a blind eye to it and also refuse to hire the local kids for some reason. Only Illegal Mexicans and Irish.

Officers with the East Hampton Town Police Department served a search warrant at the house shortly after 6 a.m. on Monday, after the town’s Ordinance Enforcement Department issued an investigation into the property.

In Queens (and the rest of NYC), we only find out about overcrowded houses with illegal apartments after a fire or other tragedy. Never heard of an Ordinance Enforcement Department in NYC - so I guess the NYPD doesn't have the ability to go in and investigate before a tragedy occurs like the LI cops do.

"like the LI cops do"
The Irish town of east Hampton cops don't do shit to illegals because they have family members that came to this country and did the same shit.
I have seen both East Hampton and Southold cops actually drive belligerent drunken illegal Mexicans home to their farmhouses, shitholes and shacks. This after committing crimes. One of these illegals stole my bicycle after smashing a window in "The Broken Down Valise" when he was denied alcohol. Was so drunk he drove it straight into the curb and breaking the wheel. He put up a fight. The cops come and threaten to arrest me for battery because "I chased him and caused him to crash" The thief produced not ID but notes and PBA cards out his pocket, turns out he workes and lived on a vineyard the town supervisors brother owned. The cops drove the guy home and left me on the street with the broken bike!!
I have since sold that summer house in Mattituck, taking a $70K loss. The east end forks are turning into the worst shitholes in the country. Now you have the blacks and Hispanic gangs going at each other in Greenport over drug turf.

Trust a former in the field observer --There was other cause to investigate that house, likely a DUI hit and run, drugs or prostitution, they just aint saying.

As a longtime resident of the Hamptons (with a house in Queens County), the East End is now a raw sewage plant of public corruption, depravity and Hollywood and political money that transformed this once quiet hamlet of paradise into cheap, grinding commerce that is governed by corrupt, empowered idiots, all of whom systematically destroyed peace, quality of life, property values and now sanity itself.

First, it was the exclusionary, intolerant extremist Jews who took issue with Christianity, when back in the late 1970s, many homes were decorated with blue lights as religious homage to the Virgin Mary, to which the parvenus of new, Jewish money objected, and they started to make hostile changes by conduit of their money, position, power and obscene, kleptocratic wealth (that determined worth).

It's all been downhill debacle (and devolution of society) ever since, my possums. I can't wait to see the new developments that pop up to support all Third World, corporate wage slavery jobs for the short season of PRIVATE SPLENDOR——versus, PUBLIC SQUALOR. This is a Jewish thing: They come in, turn paradise into a ghetto, and then bolt for greener, unspoiled pastures (exactly like Bloomberg murdered New York City, and then that maggot moved to London where preservation and property conservation were not negotiable).

Cowards, maggots, mad cows, rabid dogs and sub-human scourges of epic fail——every single one of them!

Kinda sounds like Queens!
It IS QUEENS, only with a divider called Montauk highway where the Hollywood and Jewish own all the armed guard estate fortresses on the south side. All the shit, cheap labor, prostitutes, 3rd world service industry slaves housed up on the North side live like cockroaches with impunity under "special" protections. Go into a 7-11 or any food store on a weekday, you think your in another fucking country.

Yes, Cowards, maggots, mad cows, rabid dogs and sub-human scourges of epic fail——every single one of the east ends politicians. Both forks now from the Pine Barron's east!!
Oh --so much soiled diapers, food, beer cans and garbage now (even off season) they had to build a huge sorting and transfer yard in Brookhaven with special garbage trains to cart it out via the Montauk line.
I'm so glad I got the hell out, never again !!

Overcrowding in small homes which are zoned to allow a small number of people to live in them is worse than bad construction. This issue is too serious for the governor to avoid.

Governor dont give a shit too busy schmoozing Alec Baldwin 1/2 of SNL cast and Hollywood at East Hampton Grill. Include the 20+ illegals around back washing dishes and peeling shrimp, potatoes, crabs and lettuce. Oh add Scotto's pork store whatever its called too, that gargoyle especially loves the place !!
That f_cking a'O !

So what? Got to build more barracks for immigrants!